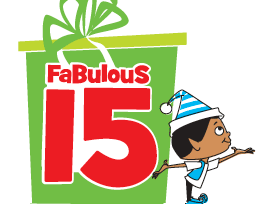 Every year around this time, Toys "R" Us steps up to their internet podium and announces their "Fabulous 15," a list of the 15 toys that the store thinks are going to be the hottest buys of the season.

Some folks say that the Fab 15 is just a gimmick to create buzz and push toys. But this year, only a third of the toys that made the list are "TRU exclusives." So it's clear that this list comes from an altruistic (and not at all selfish profit-gain) place. They want every parent's holiday shopping to be informed! We haven't seen this level of kind-heartedness since that crazy guy who thought he was Santa started sending Macy's patrons to Gimbals in Miracle on 34th Street.

Others might say that the Fab 15 list marks the official start of the holiday season. For children, it means they're now officially allowed to daydream about what toys they want, make a list, and constantly badger their folks about presents. For parents, it means that they're now allowed to have nightmares about elbowing other parents out of the way to get to the last remaining thingamabob on store shelves while simultaeously last-minute eBaying that other gotta-have-toy and paying an outlandishly gouged price just to avoid an under-the-tree "scene" come Christmas morning. (Of course, smart parents and gift-givers will simply set up a dealnews email alert and let the toys deals come to them. Just sayin'!)

No matter what you think of it, in the past, this list has never been very far off the mark in predicting the hottest toys. You might as well keep your eye on these 15 toys, and in particular, our picks for the five best items on the list. 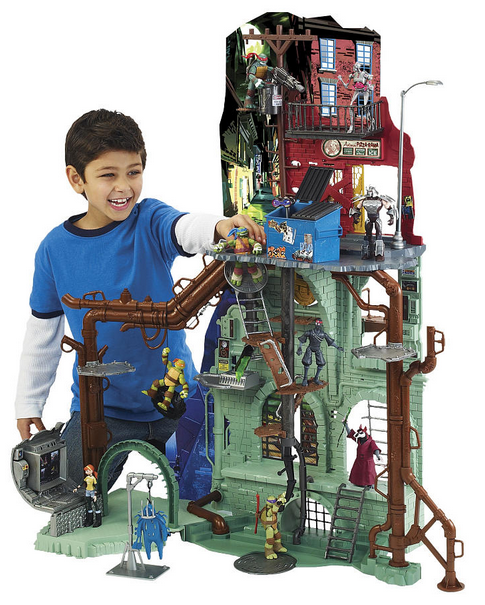 Even though this is a Toys "R" Us exclusive, we thought we'd single out this item because ... well, it's awesome. At least that's what the 6- to 10-year-old inside us is saying. See, this holiday, everyone in your kid's class is going to get figures, but how many are going to get three levels of street-and-sewer playsettery?! This one toy can make your child popular, if only because the other kids will want to use his playset to enact some pretty radical ninja turtle fights. ("Toy popular" is still "popular!")

Every generation has their squee-inducing boy band, and this year it is One Direction. (Just for fun, keep calling them "The One Direction" and see how many times you can get your daughter's eyes to roll.) If you're the parent of a Directioner, failure to take one of these home will probably result in many heartbroken tears that will keep you up all night. ("OMG! Did you see?! He totally worked 1D songs into his write-up! SQUEEEEEEEE!!!")

Good Lord, it's back! A whole new generation of kids can be introduced to the frustration and exhaustion of trying to train an incomprehensible, rambling, needy fuzzball. "What do you want?!?" your kid will shout, as it shakes the animatronic animal. "Blee bloo burble!" is the Furbish response. A prolonged sigh, followed by neglect will be the result. And everyone has learned a lesson. A $54 lesson.

So what if it teaches your kid: 1. That he or she can be a kid forever and never grow up or have to get a real job / pay bills / have credit card debt / bury a family pet, and 2. That pirates are a happy, jolly bunch who only sing about keel-hauling and getting drunk, but who are actually very responsible people who will look after your houseplants while you're on vacation? It's all for fun!

Remember what I said about altruism vs. greed, earlier in the feature? Well, this is the Fabulous 15's attempt at a greedy money-grab. We have to say, its inclusion soils the entire list. For those that don't know, the Tabeo is Toys "R" Us' foray into the tablet market. And it's supposed to be all "kid friendly" and junk, but at $150 it's only $9 less than the cheapest Kindle Fire — which can also be set up to be very kid-friendly! So which should you get? The tablet that is for kids and kids only, or the tablet that the kid and you can both use? Exactly.

But, come, let us not let this one very, very rotten apple spoil the whole wonderous toy-bunch. Instead, let's look beyond this obvious corporate ploy and continue to celebrate the Fabulous 15 for what it is: The appetoyser to the entire feast that is the holiday season.


So there are our picks for most notable of the bunch. Can you believe there is no Elmo this year?! Why, that's like having cocoa without the marshmallows! Check out the entire Toys "R" Us Fabulous 15 and tell us which toys you like in the comments section below. And if any of those price tags are making you lightheaded at being light-walleted, set up an email alert for your favorites to see when they receive substantial discounts.

Jeff Somogyi is the dealnews Media Editor. He might be an adult, but he has a child's heart. (He keeps it in a drawer. We're all terrified.) See more disturbing facts about him on Google+, Twitter, or on his blog.

Follow @dealnews on Twitter for the latest roundups, price trend info, and stories. You can also sign up for an email alert for all dealnews features.

DealNews may be compensated by companies mentioned in this article. Please note that, although prices sometimes fluctuate or expire unexpectedly, all products and deals mentioned in this feature were available at the lowest total price we could find at the time of publication (unless otherwise specified).

It's at least $300 elsewhere. Buy Now at Amazon

Clip the 20% coupon on the product page and apply coupon code "ROOPUCO9" for a savings of $40. Buy Now at Amazon