How to Choose the Right Generator for Your Home & Tailgating Needs

Whether you want to tailgate or run your household when the power goes out, consider a generator's output, fuel consumption, and more before you buy. 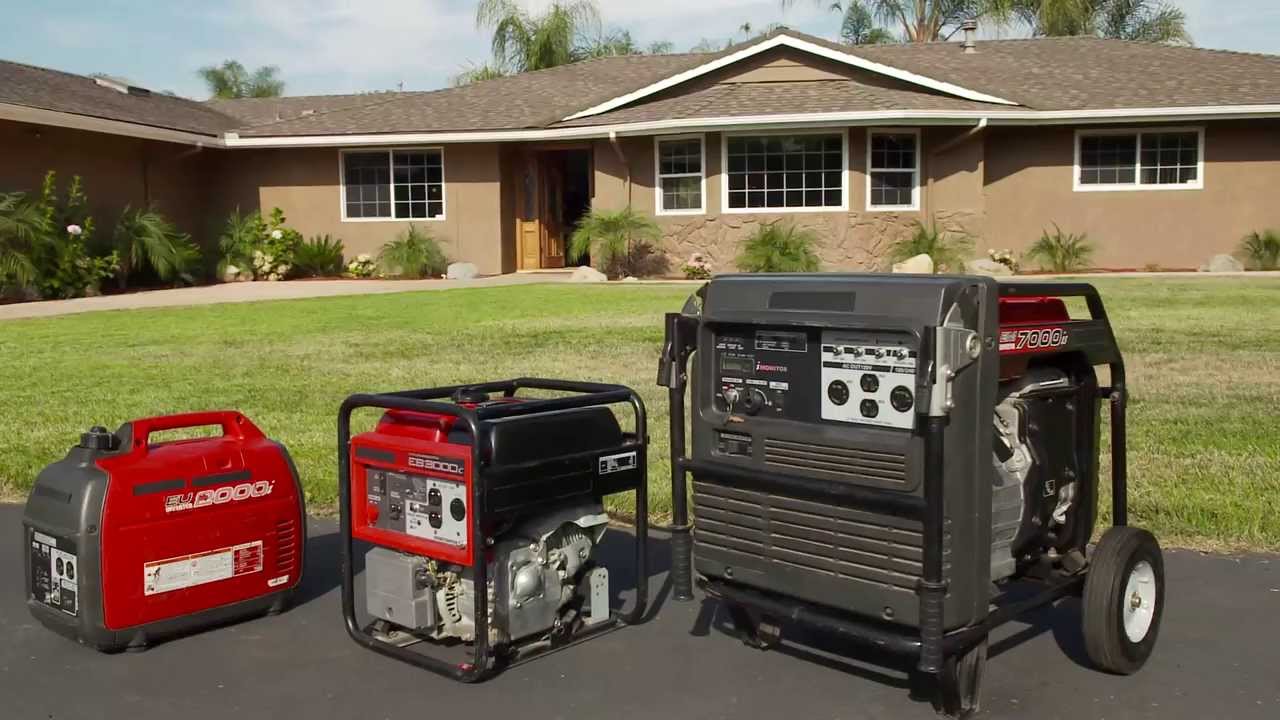 For the most part, we are an energy-addicted society that doesn't think twice about having accessible power available at every turn. Having a portable generator is a great investment for being prepared in an emergency power outage and also for dialing up the quality of a tailgate party with video and audio on a sumptuous widescreen TV.

Thankfully both emergency preparedness and party improvement via a portable generator are less expensive than you might think. While generators start at around $200, there are a wide range of options available at vastly different price points, and you can choose among several top-rated portable generators. Here's a guide to picking the portable generator that best suits your household's needs at a price you can live with.

The size of the generator you need can be easily determined by what you intend to supply power to. For a tailgate party where you're running a video system and perhaps some warming trays, you could get by with a generator that produces 1,000 watts. However, if you hope to run your household via generator during a power failure, you'll need considerably more current. Check out this wattage calculator to determine how much juice your home will need. I estimated my need for three 100-watt lights, a 36" TV, a gas furnace, and a refrigerator, and came up with 2,033 watts; you might be surprised at what power-hogs coffee makers and microwave ovens are.

It's crucial to take into consideration that at startup, many electrical devices need more current. Thus, the peak power rating on your generator should be higher than your calculated need. Most experts suggest a unit producing 4,000 peak watts or more for household application.

You may choose to run several extension cords from your generator located outside, away from the house. Therefore, it's ideal for your generator to have more than one output plug. If you plan to run power to your whole house via a single generator, you'll need to have an electrician install a power transfer switch into your home electrical system; this is the only way anything hard-wired into your system (like the furnace electronics and fan) can run.

Get Smooth Energy with a High-End Rectifier

Some newer generators include a rectifier, which converts electrical output into smooth sine waves — the kind of electricity that sensitive equipment like laptops need. Generators with rectifiers can also be more efficient; some vary the speed of the engine depending on the current drain. You'll pay a premium for a rectified generator, but if you fear you might fry your MacBook Pro, the extra expense could be worth it.

A generator's size is also related to its weight. You'll note from the deals sprinkled throughout this article that we found units that weigh between 29 lbs. and 215 lbs. Note that lightweight units that have a high wattage are going to be more expensive, and you'll want wheels on heavier models to make them easier to move.

If you're looking for a lighter model, the Duracell DS10R1i ($249.99 with free shipping, a low by $15) is a 1,000-watt gasoline-powered portable inverter generator that weighs in at just 29 lbs. and produces clean electricity that works well with sensitive equipment like laptops. It's important to note though, that this generator doesn't produce a lot of juice and only features a 2-stroke engine, which usually doesn't have as long a lifetime as 4-strokes (see below).

Most generators are powered by 4-stroke engines, meaning they don't require that you mix oil into the fuel. There are some 2-stroke generators available which, although more cumbersome to fuel, are less expensive to build and therefore can be had at a lower price point. Most generators are also air-cooled, so if you plan to use one at high noon in the summer, you'll need to make sure it doesn't overheat.

Most portable generators run on gasoline, although some operate on propane. Regardless of fuel intake, it is important to consider fuel efficiency, especially noting how many hours your generator will run per gallon of gas. You definitely don't want to have to refill your generator every two hours. The Yamaha EF2000iS generator ($924.36 with free shipping, a low by $26) is a model of efficiency; it certainly isn't the cheapest, but it can run for 10.5 hours on just 1.1 gallons of gas. It generates 2,000 watts or power and weighs only 44 lbs. Better yet, it has a rectifier to play nice with your electronics, runs at a quiet 51.5 decibels, and comes with a 3-year warranty.

Another aspect of fuel efficiency is how cleanly fuel is burned. The California Air Resources Board (C.A.R.B.) has tougher restrictions than those found nationally, so not all generators are available to California residents. The above Yamaha is C.A.R.B.-approved, as is the DuroMax XP4000S ($299.99 with free shipping, a low by $30). This 4,000-peak-watts generator features a 7-horsepower, 4-stroke engine and can run eight hours on its 4-gallon tank of gasoline. It's not a lightweight, coming in at 94 lbs. and doesn't come with wheels, so it's more suited as a stationary power supply. It does, however, come with a 1-year warranty.

If you've ever camped near someone running a generator all night, you know the noise pollution that it can cause. However, not all generators are equally noisy. Noise is rated in decibels; 70 decibels — the sound level of many generators — is about equal to the cabin noise on a B-757 flight. 60 dB is equivalent to the loudness of background music in a restaurant. If you find a generator that runs closer to 80 dB, think twice; this would be about the loudness of a garbage disposal, and who wants to live with that all day?

The Gentron Pro2 (from $915 with free shipping, a low by $85) runs about 71 decibels, and uses propane rather than gasoline. With an electric starter this machine can produce a whopping 5,000 running watts of electricity, reaching 6,000 at its peak. At this rate, you can expect to get eight hours of run time at half-load from 20 lbs. of propane. This generator is a beast, though, weighing in at 210 lbs., but thankfully it includes a wheel kit.

Look for an electric starter to keep your arm from growing weary after tugging on the generator's recoil rope. An oil gauge and low oil shutoff are also useful for automatic shutdown if the unit runs low on oil, which can keep it from seizing. Similarly, a gas gauge will tell you when it's time to refuel.

If we share one addiction as a nation, it's electricity. It makes our labors easier and our relaxation more comfortable. Therefore, it's no wonder some folks feel frazzled when the power goes out. However, for an investment of a few hundred dollars, there's no need to remain tied to the utility company's power supply. And for many, it also no longer means having to make a choice between tailgating and watching the television coverage of our favorite sport. With a good generator and a few gallons of petrol, we can kick back in either situation and continue to let the good times roll.

Note that this feature has been updated since it was originally published last winter.

Related DealNews Features:
DealNews may be compensated by companies mentioned in this article. Please note that, although prices sometimes fluctuate or expire unexpectedly, all products and deals mentioned in this feature were available at the lowest total price we could find at the time of publication (unless otherwise specified).

gregory d Tiefenthaler
Do you have a remote start available.
May 17, 2019

QuietGenerator
All the features of a generator are integrated with each other. If you want higher wattage, you'll have to have a louder and noisier output and a heavier generator. http://quietgeneratordepot.com
January 17, 2014

Chin Kong
All good points below.

Consider a Tri-Fuel generator. Some come pre-modded or you can buy the parts to make your generator able to accept Natural Gas or even Propane.... that puts you well ahead of the pack when power AND gasoline are out during like 2012 during SuperStorm Sandy, there was no gasoline.

Gov. Cuomo was unable to get gasoline flowing to LI for two weeks. Many elderly and young suffered to through the cold. People had generators but no gas.

latoberg
The link to the wattage calculator is landing on a bad page.

Should get you closer to the calculator at Briggs and Stratton.
January 14, 2014

dennisavitali
Also , do not forget a good transfer box if connecting into your house wiring. Make sure is has all your breaker needs, such as if using a well pump its a breaker designed for 220v throw! Not all transfer boxes have these type.
January 9, 2014