6 Myths About How Men and Women Shop

Stereotypes hold that women are more impulsive, more intensive, and bigger spending shoppers than men. But is that actually the case?
BY:
ANGELA COLLEY
DealNews Contributing Writer 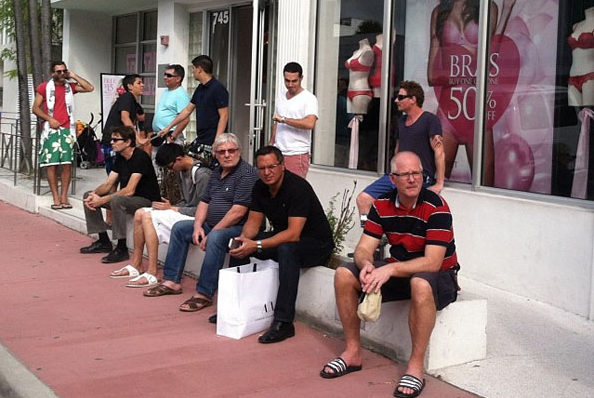 You've seen it before, maybe on a sitcom, maybe on a meme making the Internet rounds: a line of guys holding purses while their wives and girlfriends shop. When it comes to women and men, we see shopping – and buying – differently.

Or do we? Some of what we believe about our shopping habits are really just myths. The reality might surprise you. 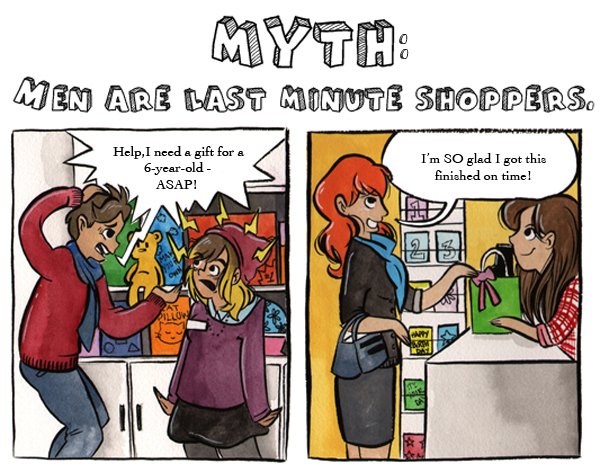 Men are frequently seen as last minute shoppers. Countless movies and TV shows have shown their male leads frantically searching for an open store on Christmas Eve or Valentine's Day, or showing up with a bad gift because they waited until the last second. But the SAP/Ipsos poll on holiday gifting says that this is just a myth.

According to the poll, 75% of men buy gifts for their significant other at least two weeks before Christmas. Even the idea of last minute shopping all together may be overblown. The poll found only 4% of men and 3% of women put off gift buying.

Myth 2: Women Do the Grocery Shopping

It may be a bit antiquated, but the belief still prevails: Women do the grocery shopping while men stay home.

In fact, research from the Hartman Group found the opposite is true. According to the report, men visit the grocery store an average of 8.2 times per month, compared to 7.5 times for women. Men are also more likely to visit club stores like Sam's Club or Costco than women. 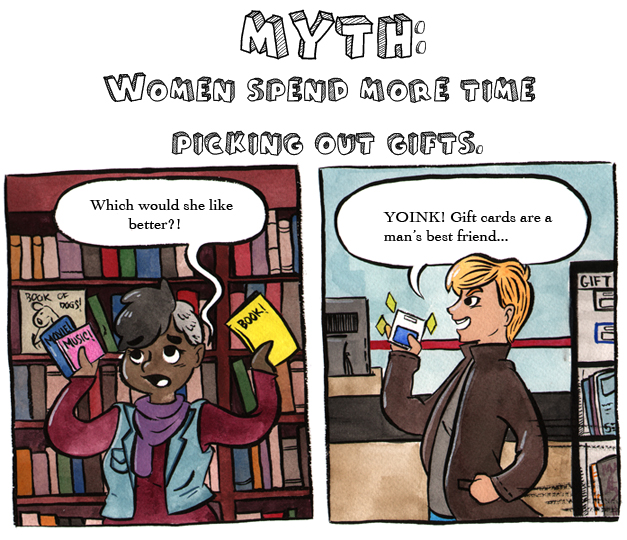 It is commonly believed that women spend more time carefully picking out gifts, while men are more likely to ask the recipient what they want or just wing it – but the SAP/Ipsos poll suggests the contrary.

Of the 3,000 consumers polled, 46% of women were more likely to ask their significant other what they wanted directly, while only 40% of men are likely to ask.

It isn't that men are unwashed, they just don't normally shop the hygiene and grooming aisles – they get a woman to do that for them. (Hence ads like Old Spice's famous "The Man Your Man Could Smell Like," which targeted women shopping for men.)

But in fact, grooming and personal care lines tailored specifically for men are one of the fastest growing markets in the beauty industry. And a study by The NPD Group found nine out of 10 men use at least one grooming product, while 37% have used a facial care product and 30% have used lip products. 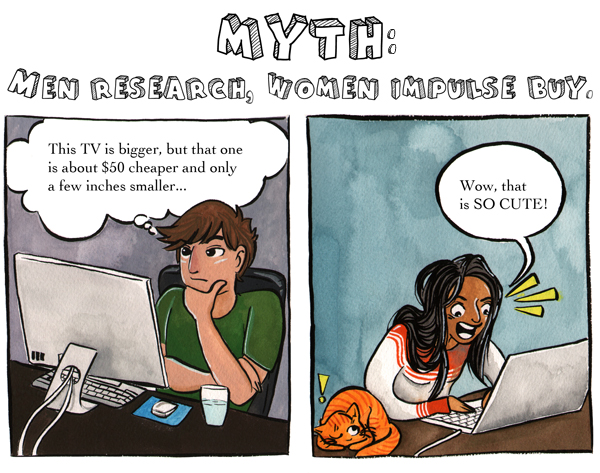 Women are more likely to "fall in love" with an item and buy it, while men like to plan out their shopping trips, right? Not necessarily. A study from The Future of Commerce found 82% of shoppers, both women and men, use consumer review sites to research a product before buying it.

Not only do women go to the grocery store, but they also go to the mall, and the big box store, and the drugstore, and... well, you get the picture. And there is actually some factual basis behind that belief. Many studies have shown that on average, women do the majority of the shopping for a household.

But it isn't always the case. A study by Business Insider Intelligence found that when it comes to online shopping, men spend as much as women, and men are more likely to make purchases on smartphones or tablets.

A willingness to shop more online may have something to do with how men perceive shopping. Many studies have shown men prefer to shop quickly, with a goal in mind, something that might be easier to do when you can quickly search for what you want from the comfort of home.

While men and women often play different roles when it comes to household shopping, many of the things we believe to be true about the opposite sex aren't really true at all – and all of us really like to shop, especially online.


Angela Colley has covered everything from money saving technology to how the Mayans might affect your savings. She's appeared on publications like MainStreet and MSN Money. You can follow her on Twitter @angelancolley.
DealNews may be compensated by companies mentioned in this article. Please note that, although prices sometimes fluctuate or expire unexpectedly, all products and deals mentioned in this feature were available at the lowest total price we could find at the time of publication (unless otherwise specified).

Scroogus Maximus
Disagree with your Myth 5 conclusion; your FB article contradicts it, too: "Men are also more likely than women to do significant research prior to making a purchase." Why cite & link an article in support of a view if the article expressly contradicts it? FB also contradicts its own survey "Men are more likely to expect a sales associate to be able to assist with requests..." doesn't match up with its survey numbers (50.5% men v. 66.7% women.)
Online marketing HAS changed shopping habits; internet use makes researching easier and less male-centered (Consumer Reports, take note!) But the fact is, women make far more emotional impulse buys than men do -usually lower-dollar, but they add up. Marketers know this, so window displays & endcaps are aimed mostly at women (and children, in grocery stores.) Companies pay HIGH prices to be in those areas! Why We Buy: The Science of Shopping by Paco Underhill is a good read on the subject (I'm not him, and he's not paying me...pity!)
April 3, 2015

zucchinibrain
lets just say that its not my wife on dealnews everyday...., i love a good deal!
April 2, 2015