Planning a trip to NYC doesn't mean overspending or under-doing thanks to these great travel and entertainment deals!
BY:
PAULA BRADLEY
DealNews Contributing Writer 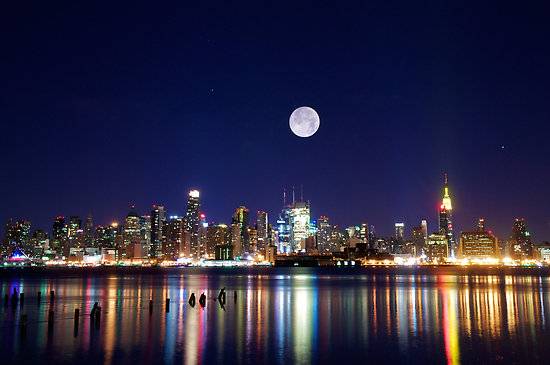 Old New York, once New Amsterdam (yes, we take all our history lessons from They Might Be Giants lyrics), is one of the few cities in the world that is just as much fun on a shoe-string budget as it is to splurge in. No matter whether you want to relax in the Park and admire the skyline, take in a Broadway show, museum hop, or shop 'til you drop, there are so many ways to experience the Big Apple that it can seem schizophrenic sometimes! Whatever your price range, we've found deals on airfare and hotels, as well as restaurants and activities that'll give you a taste of NYC without busting your budget.

Start your New York adventure off right with a roundtrip flight to New York during this American Airlines airfare sale (from $180, a low by $91; expires January 17). Or if you prefer, United Airlines also has roundtrip fares to New York (from $148, a low by $30; expires January 31). If you're planning on staying in New York for more than a couple of days, it's worth picking up a New York Explorer 3-Attraction Pass (from $74.99, a low by $5; expires March 31). This pass gives you entrance to three attractions and 30 days in which to visit them. (Passes that allow for up to 10 attractions are also available.)

In a city of landmarks, Central Park stands out as a god amongst giants. If you're treating yourself, check-in to the nearby Blakely Hotel (from $199 per night, a low by $25; expires January 23) and enjoy a traditional hotel experience with more than a touch of class. The locale allows you to take advantage of your proximity to the park and even a 2-hour Central Park bike tour (from $22, a low by $23; expires March 30). The tour takes you through famous sites such as Strawberry Fields and the Imagine mosaic, the Great Lawn, and the Bethesda Fountain.

Want to stay in central Manhattan, but reign in the spending in a bit? Opt for a 2-night stay at the Wellington Hotel (from $195.95, a low by $2; expires January 25). This hotel serves as a time capsule of turn-of-the-century New York, having opened its doors 110 years ago. Add a Spanish flair to your New York experience with a 3-course meal for two at the Casa Pomona restaurant ($49, a low by $47) on the Upper West Side.

No trip to New York would be complete without a visit to Times Square. Book a night at The Manhattan at Times Square Hotel (from $105, a low by $11; expires January 29) to be smack dab in the heart of all the action. You may go into sensory overload thanks to all the bright lights, ever-changing billboards, and bustling crowds 24/7, but it's worth it, especially in the evening when the shopping crowds have diminished and the lights are contrasted more brightly. It's also smart to avoid this neck of the woods on Wednesdays around 2 pm; it's Broadway matinee time and the streets are clogged with eager theater-goers.

The next stepping stone on our tour of New York landmarks is the Flatiron Building on Fifth Avenue. A stay in the adjacent Flatiron Hotel (from $109, a low by 16; expires January 22) puts you in the perfect position to enjoy this iconic building and the surrounding Flatiron District. It's also just a few blocks away from Union Square, where you can drop into DSW for some shoe shopping (no judgement) or stop at Crab City on Park Avenue to take advantage of half-price seafood feast and wine special for two (from $69, a low by $65; expires January 19).

Let us not forget the icon most often associated with New York, The Statue of Liberty on Ellis Island. Hop aboard a Seacoast Sailing 2-hour harbor cruise for two ($99, a low by $99) and put yourself in the shoes of the immigrants who braved treacherous waters and knew that a new life was near upon sight of the Statue of Liberty. Of course their boat trip probably didn't include a lobster roll and glass of wine like this one does. That's progress, we guess.

The final stop on our trip around the great landmarks of New York is the Brooklyn Bridge. One of the oldest suspension bridges in the world, the Brooklyn Bridge fords the East River, connecting Manhattan with Brooklyn. Once you've crossed the bridge stay at the Pointe Plaza hotel (from $99, a low by $8; expires January 29) and experience the more down-to-earth side of New York life — the subways, the ethnic food, the hipsters, etc.

Whatever kind of NYC vacation you have in mind, we hope you find it truly magical — and affordable! And if the Big Apple is just too darn exciting for you, but you still want to take some time off and get away from it all, be sure to check out our weekly travel deals for other car rental deals, discounted cruises, bargain hotel stays, and vacation packages.

At the time of publication, these travel deals offered the lowest prices we could find. Deals may include blackout dates, additional taxes, and fees. Some of our prices may be based on mandatory double occupancy. Note that select deals were less earlier in the week before publication, but all are still current price lows.

Apparently you did not read the piece I posted a link to. Be assured that the writer approached the matter from the right of center. However, he then posted an update to put the governor's now-notorious words in context.

As for the content of your second comment: How is it possible for one person to represent opposing points of view? Perhaps you meant respect*, not represent. Well, if you read the piece, you will see he did not disrespect the opposing viewpoints per se. He just pooh-poohed their prospects for success on Election Day.

*Not all viewpoints should be given respect — anti-Semitic ones, for example. I include opposition to government recognition of same-sex marriages in this group.

When you look at the context in which the words rightwingers are fuming about were said, you see he was just assessing the New York election prospects of candidates who hold the views in question (although 1. he could've chosen his words more carefully and 2. I don't believe for a minute that his assessment has as much credibility as an impartial pollster's would).

From Newsday, a Long Island newspaper, via Google News (which I think you have to go through to read it since Newsday has a paywall): http://bit.ly/KAIpKV
January 21, 2014

May I ask why my earlier comment on this feature piece was deleted?

@Wagonmaster
"the Guv has announced I am not welcome there because of my conservative views."

Wagonmaster
I'd like to return to NY again...great theater, city, etc., but the Guv has announced I am not welcome there because of my conservative views. Wow, that's tolerance for you. So, I guess I will spend my $$$ elsewhere. Probably not in Chicago, either, considered the current management. Florida looks pretty good when it warms up again. Texas believes I have the freedom to have a point of view, too. Lots of options, but not NY or Chicago.
January 19, 2014

>Old New York, once New Amsterdam (yes, we take all our history lessons
>from They Might Be Giants lyrics)

For the record, that's a song that They Might Be Giants covered so they didn't write the lyrics.
January 18, 2014

Blog · Morning Jolt · 8 hrs ago
5 Deals You Need to Know Today: Up to 70% off with Overstock's BF Spring Sale
A Black Friday sale in spring? Madness and savings abound at Overstock. Check out this offer and more in our roundup of the five best deals we found over the last 24 hours.

That's the best price we could find by $12. Buy Now at Kohl's

The majority of parks are discounted $45 or more off gate price - meaning even if you don't have a Sam's Club membership currently, you'll effectively save the entire cost of the membership on just one ticket. Shop Now at Sam's Club

It's the lowest price we could find by $51 and tied with the best deal we've seen. Buy Now at Home Depot