10 Fast Food 'Secret Menu' Items You Have to Try

Stacked burgers, burritos made with a quesadilla wrap, and unseasonal season's drinks are available at your favorite fast food haunts — if you know what to ask for.
BY:
ERIN CODUTI
DealNews Contributing Writer

Fast food chains are there to bring you a quick meal at a low price, but sometimes all the usual options just seem, well... boring. No one is going to retweet your meal photo if it's just another run-of-the-mill Big Mac!

Fortunately, DealNews is here for you. We've rounded up several off-the-menu, "secret" options at your favorite fast food joints that aren't quite so pedestrian. Some make the menu in only select locations, while others are completely unofficial. (They may be hard to order from confused cashiers, but that's half the fun!) Add a little adventure to your lunchtime and attract your friends' awe at your insider info and culinary daring with these ten options. 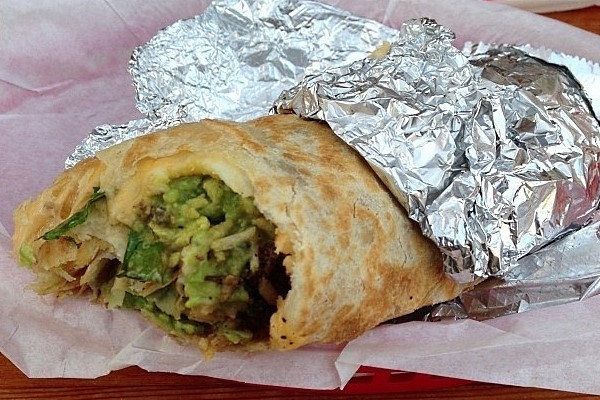 Where: Chipotle Mexican Grill
Secret Status: Super Secret. (It's not on the menu anywhere.)
What: A cheese quesadilla used as the shell for your burrito of choice. With two burrito shells and tons of cheese, this item can pack quite the caloric punch, so feel free to request the single-shell version instead. (They make a half-quesadilla and open it up to form your burrito.)
Testimonial: "The melted cheese sandwiched between two folds of crispy, browned tortilla is hard to argue with, and while I was afraid the quesadilla might detract from the burrito experience, it just added extra strata of texture and flavor." — Alissa Irei, Phoenix New Times 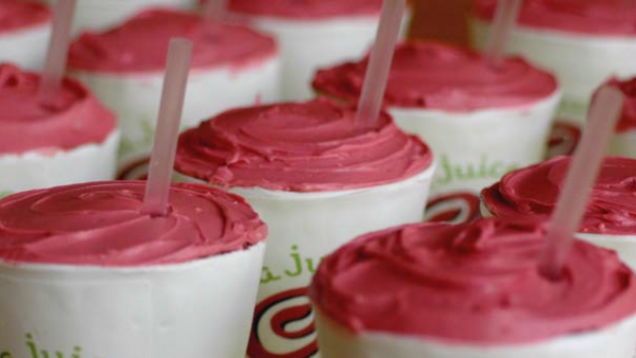 Where: Jamba Juice
Secret Status: Super Secret. (It's not on the menu anywhere.)
What: A smoothie designed to mimic the taste of pink Starburst candy, featuring flavors like strawberry, lemonade, and raspberry.
Testimonial: "Absolutely delicious, and absolutely not healthy enough to make it onto Jamba Juice's regular menu, this is by far the most popular Secret Menu item." — Elle Kenwood, MakeDrinks.org 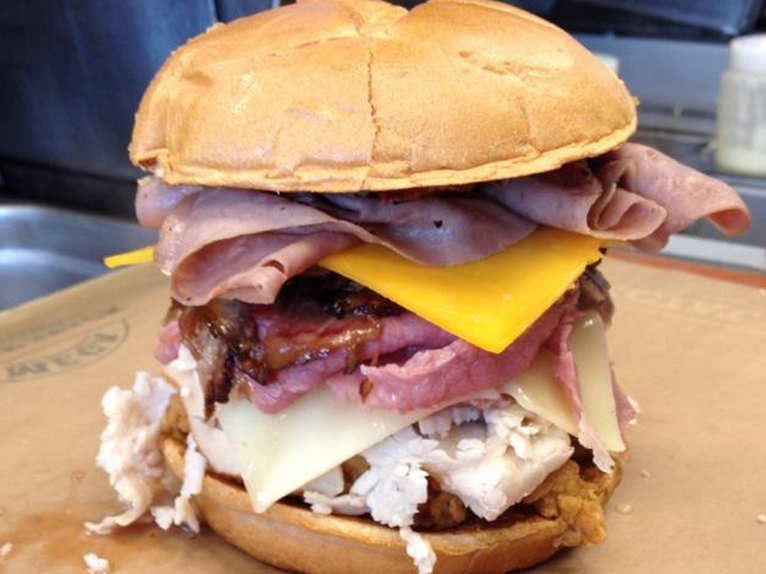 Where: Arby's
Secret Status: Pretty Secret. (It was created as an advertising gimmick, but isn't on the menu anywhere officially.)
What: A terrifying behemoth of a sandwich containing chicken tenders, ham, roast turkey, Swiss cheese, corned beef, angus steak, brisket, roast beef, bacon, and cheddar cheese.
Testimonial: "Against all odds, it's delicious. And this may surprise you, but it's not subtle. It's salt and fat, with a surprising crunch from the fried chicken and bacon hiding within. Chefs spend a lot of time trying to find the right ingredients. What we know now is all you need to do is use all the ingredients." — Ian Chillag, NPR 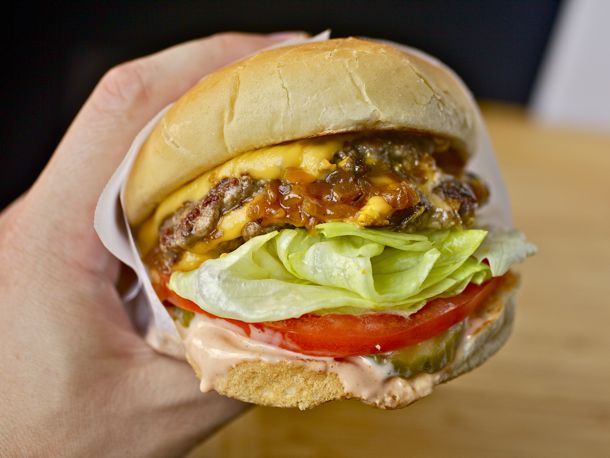 Where: In-N-Out
Secret Status: Sorta Secret. (It's featured on In-N-Out's online official "Not-So-Secret Menu.")
What: A sandwich featuring mustard-fried burger patties, grilled onions, extra spread, and pickles.
Testimonial: "In-N-Out Animal Style burger is one of In-N-Out Burger's most popular 'secret menu' items. And for good reason! This one might actually be the grand-pappy of all secret menu items. It's been around since the beginning and has developed quite a loyal following." — #HackTheMenu 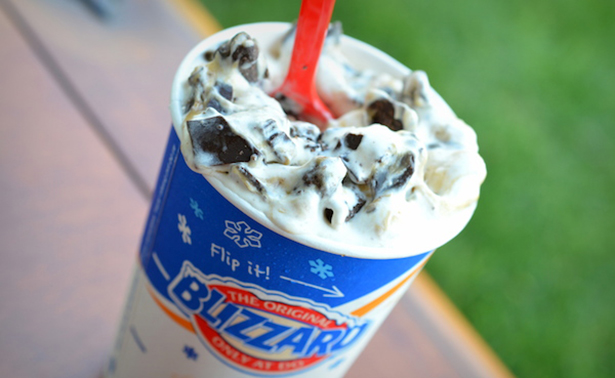 Where: Dairy Queen
Secret Status: Super Secret. (It's not on the menu anywhere.)
What: Dairy Queen doesn't have coffee-flavored ice cream, but it does have coffee syrup... so request this addition to any of your favorite Blizzard flavors for a caffeinalicious twist.
Testimonial: "Are you a fan of the strong, rich flavor of coffee? Then you should consider spicing things up by adding coffee syrup to your Blizzard." — Secretmenus.com 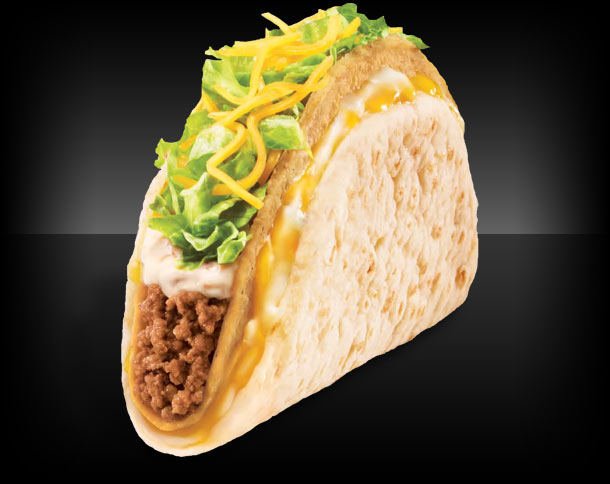 Where: Taco Bell
Secret Status: Sorta Secret. (This secret menu item is so popular that it has become a regular menu item in some locations.)
What: A hard-shell beef taco wrapped in a gordita filled with melted cheese.
Testimonial: "You've got to give credit to Taco Bell for the genius of wrapping a soft gordita flatbread around a crunchy taco shell with gooey cheese between the two acting as the packaging glue. I love the crunch of a hard shell taco, but I don't care much for it when it falls apart in my hands after one bite. The Cheesy Gordita Crunch remedies the mess with the best of both worlds... you still get a crunch, and you get your crunch contained within the flatbread." — Ryan, GrubGrade.com 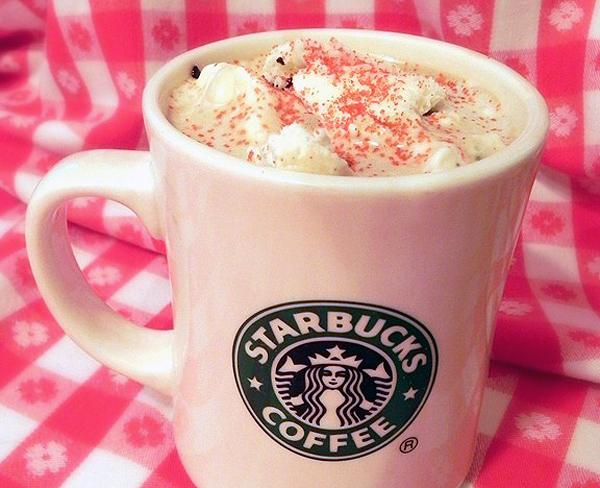 Where: Starbucks
Secret Status: Sorta Secret. (The secret isn't getting one... it's getting one in July!)
What: This drink is a regular menu item during the winter holidays, but is actually available year-round if you don't mind the lack of holiday sprinkle toppings.
Testimonial: "The one treat I love to indulge in while doing my holiday shopping is a delicious Peppermint Mocha. I was ordering these year round..." — Amy Allen Clark, MomAdvice.com 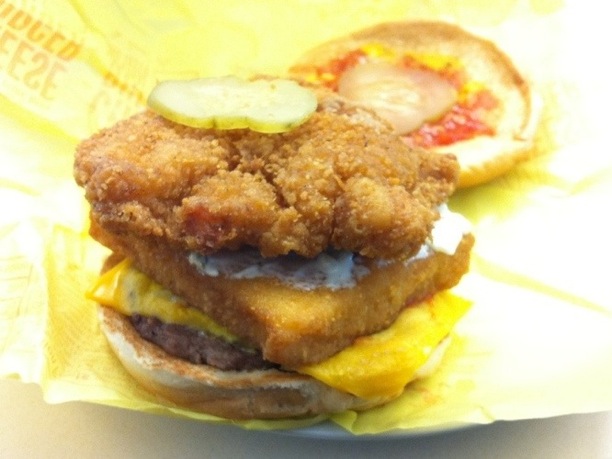 Where: McDonald's
Secret Status: Pretty Secret. (It's not on the menu anywhere, but it's easy to assemble yourself by ordering the three sandwiches separately.)
What: A Big Mac loaded with extra Filet-O-Fish and McChicken patties.
Testimonial: "In our opinion, the Land, Sea, and Air Burger is just enough to satisfy anybody's appetite." — Secret Menu Guide 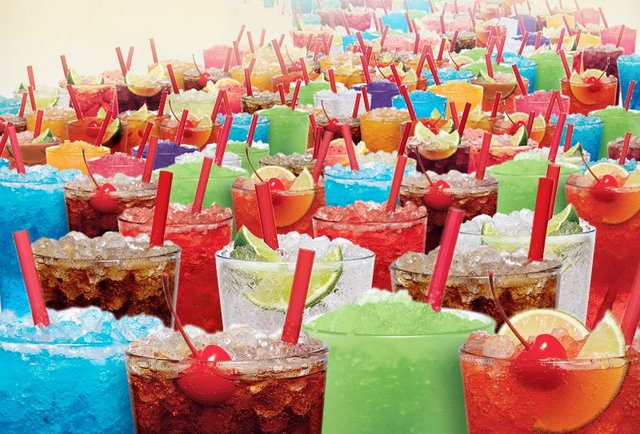 Where: Sonic Drive-In
Secret Status: Super Secret. (It's not on the menu anywhere.)
What: Powerade, lemonade, sprite, and cranberry juice.
Testimonial: "Surprisingly sweet and tart at the same time. The red cranberry juice mixes with the blue Powerade to turn everything purple." — Devon Lantry, Examiner.com 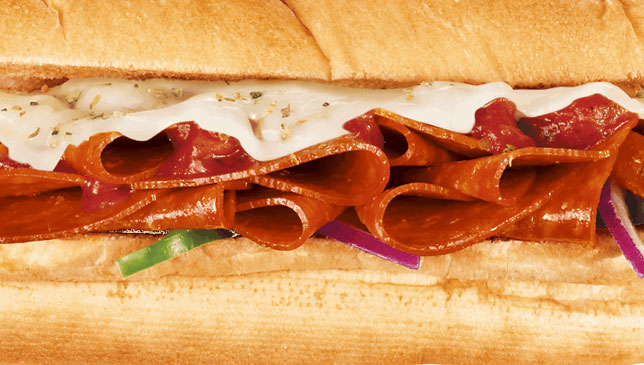 Where: Subway
Secret Status: Sorta Secret. (It's on the menu in select locations or during promotions.)
What: A sub sandwich featuring spicy pepperoni, tomato sauce, cheese, and your choice of veggies.
Testimonial: "Subway, Y U NO TELL US ABOUT PIZZA SUB?!" — TheFW

Readers, did we leave out your favorite secret item? What other chains have tasty treats for those in the know? Dish your fast food tips in the comments below!

Krystal NM
I thought the Cheesy Gordita Crunch was pretty well known? I remember ad campaigns when they first came out. Dang, now I am hungry lol
February 9, 2016

tradderjohn
i have a wichwich in town, there is no such thing as subway anymore!
February 11, 2015

AdamH68
Although it is not as funky as those listed above, at Burger King you can request your burger "OTG" which means hot Off The Grill.
February 11, 2015

trag
Taco Bell has many items still available which were once on the menu.

The Chicken Meximelt, e.g.. I believe the Beef Meximelt is still on the menu, but you can get it with chicken -- although they'll charge you for the substitution.

dealnews-bglaser (DealNews)
@mountaindont
From the second paragraph: "Some make the menu in only select locations, while others are completely unofficial. (They may be hard to order from confused cashiers, but that's half the fun!)"

This implies that you can order them by name in some places, while in others you will have to explain to restaurant staff how to make them.

mountaindont
Vinaytampa is correct. How do you order these? Do you ask for the specific name or do you tell them how to make it. That is a big omission in the article
February 10, 2015

wlau89
My girlfriend let me in on the secret food menu at Jamba. She typically gets the "Pink Star" and I usually get the "White Gummy". The white gummy at Jamba Juice is pretty freaking awesome!
February 10, 2015

JonFen
I second the question...

The Meat Mountain and Quesarito are calling me!

Lindsay Sakraida (DealNews)
@vinaytampa From my experience, you can usually ask for it by name, and the person will know what you want... BUT, there's a high rate of them not knowing what you're talking about, in which case you'll probably have to describe it, and they'll maybe turn to a coworker for help. So, "your mileage may vary" but it's worth a shot! I'm seriously craving the Chipotle one...
February 10, 2015

vinaytampa
How do I order these? Like can I just say the name or do I have to explain how to actually make it?
February 10, 2015

VIEW ALL
Blog · Buying Guides · 7 hrs ago
What's the Best Time to Buy Big-Ticket Items?
Savvy shoppers are always on the lookout for a great deal, and to help you out, we've put together guides on the best times to buy big-ticket items.
Blog · Morning Jolt · 8 hrs ago
5 Deals You Need to Know Today: The Macy's Ultimate Shopping Event Extravaganza
Macy's has arrived with its self-proclaimed Ultimate Shopping Event just in time for the weekend. Check out this offer and more in our roundup of the five best deals we found over the last 24 hours.
Blog · Buying Guides · 1 day ago
Ask an Expert: When Can I Expect a Price Drop on the TV I Want?
Do you have a question for us experts here at DealNews? If so, submit it and we might just answer it in a future column! Until then, check out our first column, which offers advice to a cost-conscious TV shopper.
Blog · Buying Guides · 1 day ago
59 LGBTQ-Owned Businesses You Can Support This Year
June is Pride Month, so if you're looking for a spate of LGBTQ-owned businesses to support with your wallet, we've got you covered! Check out our guide for 59 shops to check out now, as well as tips on how to find more.
Blog · Buying Guides · 4 days ago
The 9 Best Things to Buy in June (And 4 Things to Buy Later)
While June may be a prime time for vacations, it's also a great time to find excellent deals. Check out our guide for what to buy in June and what you should hold off on until later in the year.

Clip the on-page coupon and apply code "08FA8K2E" to save $25, making this $3 under our mention from last month. Buy Now at Amazon

Clip the coupon in the cart and apply code "40X5DSGN" to save at least $99. Shop Now at Amazon

Apply coupon code "BRGG7CNA" to get 50% off the regular price. Buy Now at Amazon