dealnews Price Trends: Is Now the Right Time to Invest in an SSD?

You might think fitting your laptop with a solid state drive (SSD) is a luxury, but the truth is — it's not. According to dealnews data, prices on 64GB SSD drives are steadily falling, and 128GB models, while more turbulent in price, have also fallen by as much as 38% since August 2010. Depending on your needs, this could mean that SSDs are now ripe for the picking. 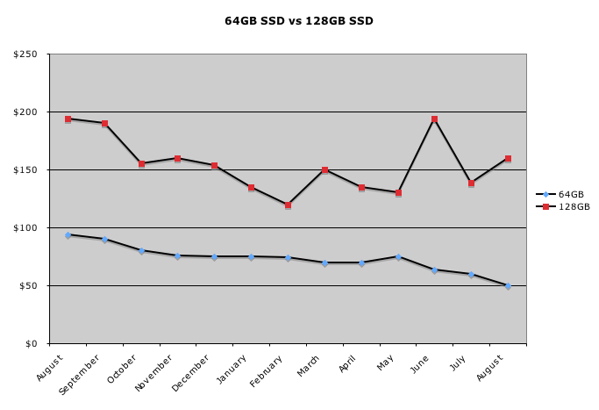 The Benefits to an SSD
Laptops are ideal candidates for SSDs. Not only are the drives shock-resistant and use less power (both great traits to have in a laptop), but SSDs also provide faster boot-up times, cooler operating temperatures, and and an overall snappier computing experience than conventional hard drives. And with no moving parts, sleep recovery and system responsiveness are also greatly improved.

While older benchmarks indicate there's no clear winner in the battle between HDD and SSD, today Windows 7 has built-in SSD support (TRIM), which ensures that write operations perform at full speed. Apple has also enabled TRIM command support in its latest OS, although it's currently limited to Apple-branded SSDs. (Unsure if your laptop can support an SSD? Click here to read Intel's primer on SSDs.)

What's the Best Price You Can Get, and When Should You Buy?
The chart above lists data on 64GB and 128GB SSDs (those capacities were the most popular in our archives). 64GB SSDs hit their all-time low this August ($50 via Amazon). And their steady decline leads us to believe these models will get even cheaper, especially as Black Friday approaches. Currently, the least expensive option is the Kingston SSDNow V-Series 64GB Serial ATA 3Gbp/s 2.5" Internal Solid State Drive ($94.95 with free shipping); it hit $50 last month, so consider keeping an eye on this model.

128GB SSDs have dropped considerably also, but unlike the 64GB models which have dropped consistently, 128GB SSDs have fluctuated with a few spikes throughout the past 12 months. These models hit their all-time low in February when we listed the Kingston SSDNow V-Series 128GB Serial ATA 3Gb/s Internal Solid State Drive (SSD) 2.5" Notebook Hard Drive for $150 (now $219.99 with free shipping; a similar model is also available for $187.74 with free shipping). Furthermore, 256GB SSDs (not shown in chart above) have plummeted from $410 in May 2011 to $300 this August.

If the thought of a laptop with a 64GB SSD doesn't sound too paltry for your needs, the magic price to look for is $50 or less ($0.78/GB). For 128GB models, look for deals at $120 or less ($0.93/GB). Regardless of the capacity you choose, the vendors with the most aggressive pricing have been Amazon, newegg, and Buy.com.

Ready to put this information to use? Check out our growing section of SSD deals, or set up an email alert to know immediately when we list the item of your choice.


*This data is based on deals listed on dealnews.com, which represent low points, not averages. Shipping prices (where applicable) were factored into the pricing in our data.

stewartwb
I upgraded my laptop with a 120GB SSD as the boot drive, then replaced my DVD drive with a 500GB hard drive using one of these Optical Drive Bay adapters:

Switching to an external DVD drive wasn't much of a hassle.  I mainly use it to install software, and I seem to need one less frequently as time goes on.

Brian Moon (DealNews)
Actually, if you consider price per IOP, SSDs are a great bargain. They do way more work in way less time than a traditional hard drive. If your daily work load relies on your hard drive being fast, you will get more done in less time with an SSD, making you more money.
August 31, 2011

stewartwb
Overall, this is an excellent article.  Thanks!

One issue -  I think you should omit the reference to that outdated PCWorld article.

...While some benchmarks indicate there's no clear winner...
(://www.pcworld.com/...k_drives_in_laptops.html[/ur)

The linked article is from July 2007, when SSDs were in their infancy.  It quotes a price of $540 for a drive of 80GB or less, and it predates Windows 7, TRIM support, and likely SATA2, not to mention SATA3.

There is no question that modern SSDs in modern machines perform better than any consumer or enthusiast hard drive, even WD Velociraptor 10K RPM models.  The only thing holding them back is low total capacity and high price per GB.

I agree with the rest of your analysis. I just took the plunge yesterday on a short-lived deal you listed at MicroCenter, for a OCZ Agility 3 120GB drive for $130 after rebate.

-- update -- author has revised the relevant section to stress the age of the PCWorld article and the technical advances in modern SSDs
August 31, 2011

VIEW ALL
Blog · Morning Jolt · 5 hrs ago
5 Deals You Need to Know Today: Bulk Household Savings at Woot
"Buy soap in bulk, no cause to sulk," goes the old proverb, and like most proverbs, it eventually proves true if you wait long enough. Thanks Woot! Check out this offer and more in our roundup of the five best deals we found over the last 24 hours.
Blog · Marketplace · 2 days ago
The 10 Best Products to Sell Online in March 2023
What are the top categories for Marketplace sellers in March 2023, and what products within them are best to list? Read our March selling guide to find out!
Blog · Buying Guides · 4 days ago
The 154 Best Birthday Freebies of 2023: Celebrate With Free Stuff!
Your birthday is all about you, and you deserve to celebrate! Read on for the best birthday freebies we found and how to get them.
Blog · Roundups · 4 days ago
The Best Super Bowl TV and Food Deals of 2023
Super Bowl TV sales might not be as good as what we see around Black Friday, but that doesn't mean there aren't good deals! Check out all the best Super Bowl offers available right now on TVs, party food, fan gear, and more.
Blog · Buying Guides · 6 days ago
How to Buy a TV at Target
Need an entertainment upgrade? Read on to learn how to bag the best Target TV deals for your buck, plus get other tips on buying a TV from the retailer.

That's the best price we found in any color elsewhere by $7. Buy Now at Amazon

Apply coupon code "AUTELSAVE" for a savings of $112. Buy Now at Amazon

Prime members can clip the $60 off on-page coupon and apply code "XQ3SGYOZ" for a savings of $123. Buy Now at Amazon

That's the best deal we could find by $13. Buy Now at Amazon