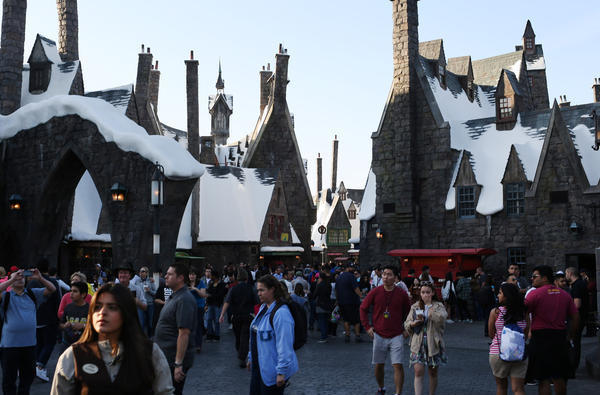 If you've been anticipating a trip to the Wizarding World of Harry Potter at Universal Studios Hollywood for its grand opening next month, we hope you've already purchased your ticket. If not, be prepared to part with a few more Galleons than you would have a couple weeks ago. Just ahead of the new section of the park opening, Universal raised ticket prices by 20% without notice.

Universal Studios recently launched a tiered pricing policy. It incentivizes guests to visit the park during off-peak days, such as the middle of the week during the fall, by offering discounts.

While it was implemented as a way to ensure guests of all economic levels could enjoy the park, that doesn't mean this policy is immune to increases. In fact, ticket costs leaped right after online pricing was introduced, with prices for a visit on low-demand days increasing by $15, and high-demand days jumping by $20.

Other Parks Have Also Boosted Prices

The sister park in Orlando increased ticket prices by 36% before a similar Harry Potter attraction opened there in 2010, but this isn't a move that's exclusive to Universal.

Disneyland has also made comparable decisions. In 2012, Disney pushed prices up by 9% before it opened its Cars-Land attraction. And it pushed up the cost of its highest daily ticket last month by 20%, possibly due to the construction that's about to commence on the planned Star Wars expansion.

SEE ALSO: 8 Easy Budget Hacks to Use on Your Next Vacation

It seems that price increases are all but guaranteed if a theme park is opening a new attraction. Yet this doesn't keep park goers away. Sure, some visitors with less disposable income might opt to change or cancel their trips. But for most patrons, an increase of this measure is so slight, it won't affect their plans at all.

Park executives aren't concerned; the few customers they might lose doesn't compare to the surge of visitors coming just to see the new part of the park.

Readers, do price hikes on tickets make you less likely to visit a theme park? Or do you think it's just part of new attractions opening up? Sound off in the comments below!

tradderjohn
Disney, just announced tiered pricing too. Price, i dont care, I go for 3-5 days with a multi park pass every couple of years.
March 28, 2016

johnnylately
I read a lot of Disney blogs and so many people complaining about the ticket prices (like myself). IMO the price has almost nothing to do with new rides or gas/oil/food prices, it's just the numbers of people going to the parks. They raise the price, attendance numbers still go up. They give us new rides and shows to offset the pain of a price increase. Until attendance drops they'll keep raising them. The price increase didn't stop us from buying more tickets for a WDW trip in May, just limited the number of days we'll be in the parks.
March 28, 2016