Beware of counterfeit shopping apps, even if they show up in official app stores.
BY:
MOLLY MCLAUGHLIN
DealNews Contributing Writer

Fake apps are big business. While they've long been thought of as an Android issue, they're now proliferating in the Apple App Store. These scams have evolved, and are now targeting personal shopping apps, making them more dangerous than ever.

Both Android and Apple users were subjected to fake Pokémon Go apps after that game exploded with popularity in the summer. Counterfeit apps come in a few different forms; many bombard users with ads to get a quick buck, while others are a platform for stealing your financial information or even your identity.

Below, we give you the scoop on the current crop of fake shopping apps, and offer handy tips on how to avoid them.

Most recently, several outlets have reported a spate of fake apps in Apple's App Store masquerading as big brands, such as retailers like Overstock.com and brands like Jimmy Choo. A reporter at The New York Times found 16 apps from a company called Footlocke Sports Co. Ltd. purporting to be from the Foot Locker retailer. The real Foot Locker has three official iPhone apps.

If you make a purchase through a fake shopping app, your payment information could be compromised.

Of course, these apps are for shopping. If you make a purchase through one thinking it's the real thing, your payment information could be compromised.

Sales on mobile devices topped $1 billion on Cyber Monday according to comScore, and makers of counterfeit apps are taking advantage of this retail trend. Compounding this issue is Apple's rollout of search ads in its app store, giving counterfeiters a platform to push their product and put it at the top of search results.

SEE ALSO: Use This Service to Connect Apps and Save Money

Apple will likely enhance its vetting process, perhaps offering a "verified" feature like those offered by Facebook and Twitter. But in the meantime, it's up to you, the consumer, to dodge fakes.

Here's How to Avoid Fake Apps

Before downloading a new app, go to the brand's official website and look for a mention of its mobile apps; use the link it provides rather than searching the app store. Two of the retailers spoofed in the Apple App Store include Dollar Tree and Dillard's, neither of which has an official app. A quick search on their websites would verify that fact. It may be hard to believe, but there isn't really an app for everything.

Check for spelling errors in the company name and app description; that's a major red flag.

Android users should stick to the Google Play Store or the Amazon Underground app; Apple users are, of course, restricted to the App Store. Once there, confirm that the name of the developer matches the company exactly. One reporter found a fake Overstock.com app from Overstock Inc. The real company represents itself as Overstock.com on app stores.

Also look at reviews associated with the app. If no reviews exist or if they're largely negative, steer clear. Finally, check for spelling errors in the company name and app description; that's a major red flag. When in doubt, don't download that app!

Readers, have you come across any counterfeit apps? Did you realize at the time that it was fake? Share your experiences in the comments below!

VIEW ALL
Blog · Morning Jolt · 19 hrs ago
5 Deals You Need to Know Today: Deals on Men's Watches and Nike Air Max
Time comes for us all, including the prices of these men's clearance watches at Macy's. Check out this offer and more in our roundup of the five best deals we found over the last 24 hours.
Blog · Buying Guides · 1 day ago
What to Expect From Halloween Sales in 2022
Spooky season is upon us again, which can only mean one thing: it's time to start shopping for Halloween! Check out our guide on what to expect from the best Halloween sales in 2022.
Blog · Buying Guides · 1 day ago
How to Shop for a Phone at Target and Save
Target is a great place to buy almost anything, including your next mobile phone. Check out our guide on how to shop for a phone at Target to get helpful tips and tricks.
Blog · Buying Guides · 2 days ago
Black Friday Predictions 2022: Check Out Our Deal Previews!
We've gathered all our Black Friday predictions for 2022 in one place, so you can check out our extensive guides and know what kind of discounts to expect on travel, TVs, Apple products, and more.
Blog · Buying Guides · 4 days ago
Ask an Expert: What Is the October Prime Day Sale All About?
Check out our latest column on Amazon's Prime Day event in October, and get the details on who can shop, how it's different from the July sale, and more.

Clip the on-page coupon and apply code "64HYSU8M" to save 50%. Buy Now at Amazon

Clip the 10% off on page coupon to save at least $9 off the list price. Shop Now at Amazon 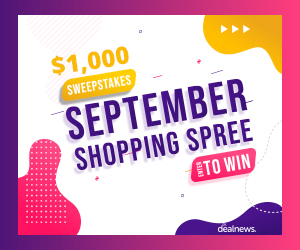