You Know Corning's Gorilla Glass Is Good, But How Good? 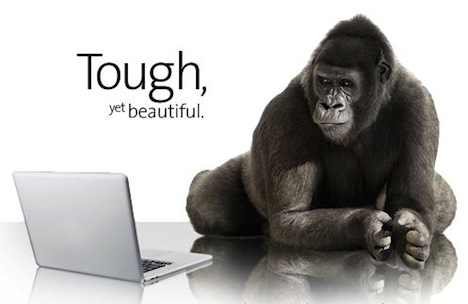 You probably have seen the television commercial where the host is showing off a baseball video game on his big flat screen to his friend. Then the friend pitches the game controller through the center of the television, shattering it into smithereens. I don't know about you, but I still cringe just thinking about it.

The engineers at Corning had been thinking about the same problem, and came up with a solution: Gorilla Glass. The company has been making it since 2008, and now it's used in more than 350 different product models that have shipped more than 200 million devices. While it once might have been a novelty, it's now competing in the mass market. That makes the consumer question: Is there something so special about Gorilla Glass that you would want to choose a TV that has it over one that doesn't have it?

Different types of glass have different chemical compositions. Gorilla Glass starts with a fairly typical combination of silicon, aluminum, and oxygen, along with some sodium distributed throughout. After this mixture has been melted and formed into a sheet of glass, it is immersed in a bath of molten potassium salt at a temperature of about 400 degrees. And that's where the magic happens.

This compression makes it harder for the glass to break. Imagine if you were trying to cut through a loaf of bread. If it has a soft crust, it is easy for the cut to advance through the bread. But if there is a hard outer crust, it is harder to start a cut. The effect is similar with Gorilla Glass; the compression prevents scratches and cracks from advancing through the rest of the sheet.

The end result is that a sheet of Gorilla Glass is stronger than a sheet of window glass that is two and a half times as thick. This produces some important advantages. According to Corning, manufacturers can design their products to use glass sheets that are three to five times thinner, and weigh 70 to 80% less than other glasses. This is especially important for mobile devices that need a durable screen yet still remain lightweight and compact.

Apple does not disclose what components are used in its iPhone and other products, but many people are convinced that the iPhone 4 uses Gorilla Glass for its cover layer. Other manufacturers are more forthcoming, and you can find Gorilla Glass in the Samsung Galaxy Tab, the Nokia Astound, the Motorola Droid and Xoom, the HTC EVO 4G, and the Dell Streak 7 Tablet, to name just a few products.

And yes, Gorilla Glass is showing up on large flat-panel HDTVs as well. The extra strength makes it possible to create a thin cover glass that goes edge to edge, covering the display panel and bezel for a clean design that also provides protection against scratches or other damage. Manufacturers have now chosen to add Gorilla Glass to some of their HDTV designs, including Sony, which uses it in their KDL-HX820, KDL-NX720, and KDL-HX929 series of BRAVIA television sets.

How can you tell for sure if a product uses Gorilla Glass? You won't need a baseball bat to test it. More and more manufacturers are pointing out this feature right on their specification sheets and in their marketing materials, and Corning keeps its own list.

Alfred Poor, known on the web as the HDTV Professor, is an independent technology industry analyst and freelance writer based in Pennsylvania, specializing in PC-compatible microcomputer hardware and software products. He was a contributing editor to PC Magazine and Computer Shopper, and currently is a columnist at HDTV Magazine.
DealNews may be compensated by companies mentioned in this article. Please note that, although prices sometimes fluctuate or expire unexpectedly, all products and deals mentioned in this feature were available at the lowest total price we could find at the time of publication (unless otherwise specified).

theb1g
I managed to shatter a gorilla glass screen with one good drop
May 17, 2011