Would You Sell Your Personal Data for Profit?

Personal BlackBox is developing a way for consumers to bottle their online and retail activity, to sell to marketers who desperately want information.
BY:
LOU CARLOZO
DealNews Contributing Writer 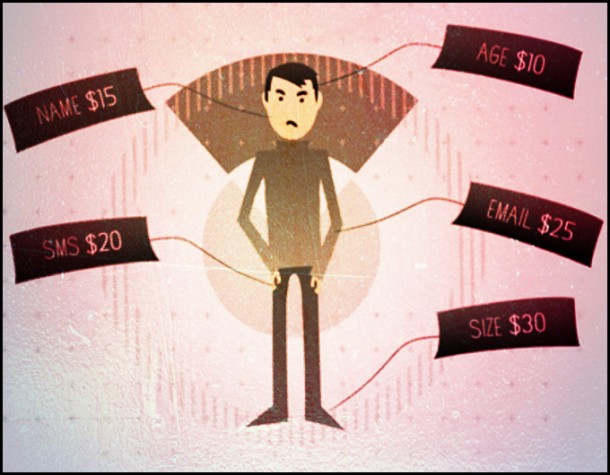 Retailers have long been paying top dollar to search engines and others to get a peek at your browsing habits, and you can see the evidence in the ads that pop up later on. They'll remind you time and again of the item you almost bought, or something else from the same retailer. But one woman wants to change the way the data flows, at least from the monetary end.

Nell Merlino, a former Fulbright Scholar and the creative force behind Take Our Daughters to Work Day, is now working on a new project: Personal BlackBox. Now in the final stages of development, the technology promises not only to safeguard the data you generate, but give you the power to make money off it as well. Merlino gave DealNews a glimpse into how it will work, and other particulars behind how the revolutionary new service will work for consumers.

How Much is Your Data Worth?

Pointing and clicking is something we all take for granted, but believe it or not, it has monetary value to some very familiar websites. For example, if you go to a site called PrivacyFix.com and download its free app to your computer, you can see in seconds how much you're worth to Google and Facebook on an annual basis. It may not be much, perhaps several hundred dollars a year. But keep in mind your activity all over the Internet — especially what you shop for and where — is rapidly gaining value to marketers who are now pros at crunching huge amounts of data.

If you had to take a guess at how much data you generate per year, what would it be? Merlino knows the answer, and it's 1.8 million MB (or 1.8 TB) annually for the typical person. As you chew on those digits, consider their potential worth in the marketplace. "Facebook, Google and Amazon have an enormous amount of data about each of us," Merlino says. How much? "If you called Facebook and asked for it, they would send you 1,000 pages."

How much is it worth, then? Merlino doesn't know but she's certain of this: "The spend in advertising is changing from TV and radio to online advertising."

She adds: "A lot of consumers don't know that the data they generate has value, and that they can use it for themselves." But it's not as simple as, say, hooking up a digital vacuum cleaner to your laptop or smartphone and sucking all the ones and zeroes out. Consumers will need a third party to usher them into the process and make collecting and selling the data easier. Personal BlackBox will be one of the first enterprises to fill that gap.

BlackBox Will Stop Data Before They Get It

In the typical scenario, the data you generate winds up in the hands of marketers, who turn it into value and insights. But Personal BlackBox will provide a stopgap, a place where your data can be stored before anyone else gets a hold of it. From there, you'll be able to sell it to marketers and companies before they snag it for free.

What's more, you'll be able to cultivate it like an asset. "It will unlock the potential of personal data for members and clients by helping them protect, see, and grow its value," Merlino says. The entity behind Personal BlackBox is known as the Personal Data Independence Trust, which you can join with a single click. It's what's known as a public benefit corporation. "The board is responsible not just to their shareholders, but the commitment they've made to the customers." Interestingly, Patagonia is an example of such a company, beholden to public-benefit concerns (in this case environmental) alongside profits.

It's worth noting that Personal BlackBox isn't the only group working on this idea. In the MIT Technology Review, Reputation.com cofounder and CEO Michael Fertik said his company would launch a feature that lets users share certain personal information with other companies in exchange for discounts or other perks. Allowing airlines access to information about your income, for example, might lead to loyalty points offers or an upgrade on your next flight.

BlackBox Green: When and How Much to Expect

Here's one reason to root for Personal BlackBox: All those companies asking you to take free surveys (and take up your valuable time as well) would have to fork up for the privilege. "You have to be in a pool and understand what offer that's being made, but you'll be paid for your participation — whether it's a survey, trying a product, or [getting] your opinion on a design," Merlino says.

While consumers can now sign up for the beta version, Windy City denizens will get the first crack at PBB, perhaps early next year. The company is working with Northwestern University's Segal Design Institute while it makes consumer-to-business connections. The full rollout should happen July 4, 2015, a date Merlino refers to as "Personal Data Independence Day." Everything's on schedule, she adds, and consumers with robust activity on the Internet can expect to make anywhere from $50 to $500 a month or more, depending on how much data they generate.

If that forecast comes to pass, it will mark quite the paradigm shift. Since the dawn of modern commerce, advertisers have worked very hard to entice us to buy, and marketers work just as hard to learn everything they can about us. Selling personal data adds an unprecedented wrinkle — one where the consumer, in essence, says that the information that stores and marketers want will come at a price. Yes, point, click, and ka-ching almost sounds too good to be true. But there's now a race to get the technology and consumer education in place — and, within the next year, put cash back in your pocket; at least without having to fill out those annoying rebate forms.

What do you think, reader? Would you use Personal BlackBox? Let us know in the comments below.

mark707
And by the way, if you don't want Google and Facebook to monetize from your data, you have the option of not using their services.
September 23, 2014

mark707
Google and Facebook provide free services (e.g. email, messaging, maps, etc) in exchange for our online data. We have to understand that they need to make money to provide good services for free. If we will be paid for our online data, it's likely that we will also have to pay for the services we use on the internet.
September 23, 2014

skittles
Yes I would rather get paid vs giving it away. There is no such thing as privacy anymore. I shop online for most of my items, I will be interested to know if this would include ebay?
September 22, 2014

It's $44 under our March mention and the lowest price we could find today by at least $45. Buy Now at Amazon