Wireless Carriers Are Offering a Free iPhone 7 With Trade-In

Do you have a paid-off iPhone 6 or 6s? Then you may be eligible to receive the iPhone 7 for free. Be careful about restrictions though.
BY:
JULIE RAMHOLD
Senior Staff Writer/Spokesperson 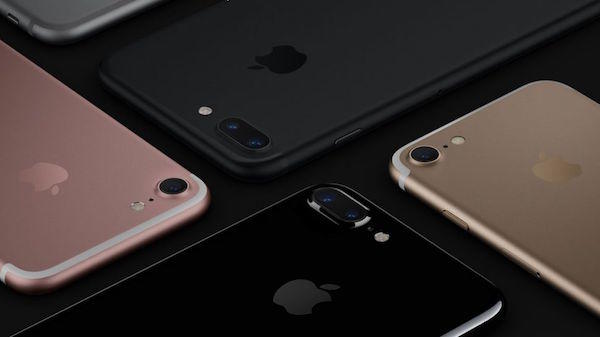 Those who just can't wait to upgrade to the newest iPhone are in luck — starting today, all the major carriers are offering some kind of deal where customers can score the 7 for free, and the 7 Plus at a hefty discount.

If you haven't traded your old iPhone for cash yet, you can take advantage of some pretty sweet offers. However, like you've always heard, "nothing in life is truly free." There are a few catches you need to be aware of before you preorder that new iPhone.

At T-Mobile, Sprint, Verizon, and AT&T, you can trade in your paid-off iPhone 6, 6 Plus, 6S, or 6S Plus (as long as it meets the carrier's requirements) and score an iPhone 7 32GB for free. You must sign up for a 24-month installment plan (AT&T will also allow you to sign up for a 30-month plan), and if you cancel your service, you will owe the remaining balance on the device. You'll have to pay for the first few monthly installments on the device, after which you'll be reimbursed and the monthly installments will be credited on your bill. You'll also have to pay taxes and standard fees up front, neither of which are reimbursed.

Although the offers are similar in nature, each carrier seems to have put its own twist on it. T-Mobile is charging $100 more per tier for additional memory variants. However, you can also score the iPhone 7 Plus 32GB for $120 when you trade in one of the above models. If you have an iPhone 5, 5c, 5S, or SE that's fully-owned, you can still score the 7 and 7 Plus at a hefty discount. After trading in your older device, the 7 will be $250, and the 7 Plus will be $370.

However, T-Mobile also requires new or existing customers to purchase the iPhone 7 on the ONE plan. If a customer is on an older plan, they must switch to ONE in order to take advantage of the offer. The good news is that ONE provides unlimited talk, text, 4G LTE data, streaming video and music, travel abroad and GOGO. The bad news is that for those that are still on T-Mobile's older and cheaper plans, like the Simple Plan, this offer isn't going to save them much.

The ONE plan starts at $70 per month. And if you trade in an iPhone 6 or newer, your monthly credits are around $27 for the phone. In the end, if you were on something like T-Mobile's Simple Plan (which was $50 per month) you're still going to be paying an extra $20 per month, just to have the iPhone 7.

Sprint: Trade in an iPhone or a Samsung Galaxy S7 or S7 Edge

Sprint's twist is that it's only taking the iPhone 6 and newer models for Apple, but it's also taking the Samsung Galaxy S7 and S7 Edge as trade-ins. It's also providing customers with the iPhone 256GB model at the price of the iPhone 128GB model when they purchase online. All of Sprint's current plans are eligible for this offer, including its promotion of 50% off for customers who switch from other carriers. This is also the only carrier that we've seen explicitly state the offer doesn't apply to backorders.

Verizon: Older Trade-ins Can Still Get a Discount

Verizon is also purportedly providing customers who want to trade in an iPhone 5, 5c, 5S, or SE with a $400 credit towards a new iPhone 7. However, it's also been reported that Verizon is providing those switching from Android to iPhone up to $300 on their trade-ins.

AT&T: Offer Requires Signing Up for the Next Plan

AT&T is the most restrictive of all the carrier offers. Unlike its biggest competitors, Verizon and T-Mobile, the only eligible trade-ins at AT&T are iPhone 6, 6 Plus, 6s, and 6s Plus fully-owned and in good working condition. Plus, in order to snag that free iPhone 7, customers must sign up for an AT&T Next plan with qualifying wireless service that is at least $50 per month. This offer is not an AT&T Next upgrade offer, and is not eligible for any extra discounts on the iPhone.

Tax on the full retail price is due at the time of sale. Depending on your store, you might have to complete the trade-in and new purchase in one transaction. As usual, should you end your service before the 24 or 30 months are up, you'll be charged the full remaining balance on the device. Other fees, including a deposit, may also apply.

There are always notable carrier trade-in deals on iPhones at some point in their lifespans, but they usually pop up months after release. Usually these deals also involve netting shoppers a credit towards a newer model, or a BOGO free offer if they're lucky. We were unable to find evidence of such one-for-one trade-in promotions like these in the past, and certainly not at the time of launch of the newest iPhone model.

Last year, all the major carriers offered trade-in deals but nothing of quite this caliber. For those with an eligible trade-in, Verizon provided a $200 gift card and a $100 bill credit and AT&T offered up to $300 for older models. In either case, these were only worth it if your phone was worth less than $300.

If You Want to Upgrade Every Year, You Might Want This Plan

While these are probably the best trade-in offers we've seen from carriers for any new iPhone, ever, customers probably shouldn't expect this to be a yearly occurrence. If you're an iPhone enthusiast who wants to be able to upgrade every year to the newest model, it could be worth it to look into a new program being offered by Apple. Check out the iPhone Upgrade Program, which isn't free, but does enable you to grab the newest model every year.

Readers, will you take advantage of these deals to snag the new iPhone 7? Or will you wait for the price to drop? Let us know in the comments below!

Thank you for letting us know. We've updated the article to reflect T-Mobile's offer.

mnm14
Yup...TMobile just changed their offer today WITHOUT notice. I spoke to them on the September 9th the day the iPhone pre-order unrolled. They told me the offer is good through the end of the month. Like before you can only trade up your paid up iPhone, but only if you upgrade to the ONE plan. That wasn't the stipulation before. Completely unfair! I'm a long time TMobile customer and there is no accommodation for existing customers!
September 15, 2016

CvKenterprises
Ok I have two (2) iPhone 4 and a iPad 2nd gen that all can go so I can upgrade. What is my best beat to get something out of them.
September 15, 2016

BlueOak
It most certainly is not "Free".

1) 2 year contract.
2) You're handing the carrier an almost new phone.

You now must upgrade to T-Mobile One (Unlimited) to get the offer.

dealnews-jramhold (DealNews)
@dschilpp We've clarified that taxes and fees are due at the time of purchase; but there's no downpayment in the traditional sense, and monthly installments are covered after 3 months. So it really is free (outside of those fees, anyway)
September 15, 2016

dschilpp
Will you guys please stop saying that the phone is FREE. It is most certainly not. You have to pay monthly installments on it. It is a no money up front plan. That is very different.
September 14, 2016

Chin Kong
A manager called me back after speaking with several different operators and said he was aware of the "iPhone on Us" offer and that although I pre-ordered I still qualified to trade in a 5, 5c or 5s to get $399 off an iPhone 7.
September 13, 2016

Chin Kong
Have called T-Mobile 3 times now. Not ONE of the operators has heard of the "iPhone7 On Us" offer!

Wasted a lot of time as they were offering chump change for old iPhones. Good grief.
September 13, 2016

lcbrownz
Only "the 7plus comes with the dual cameras.
September 10, 2016