Why the Surface Pro 3 Fails at Replacing Your Laptop

Microsoft is touting its Surface Pro 3 as the ultimate laptop replacement, but this $799 tablet won't provide laptop-like productivity unless you opt for the $130 keyboard.
BY:
LOUIS RAMIREZ
DealNews Contributing Writer 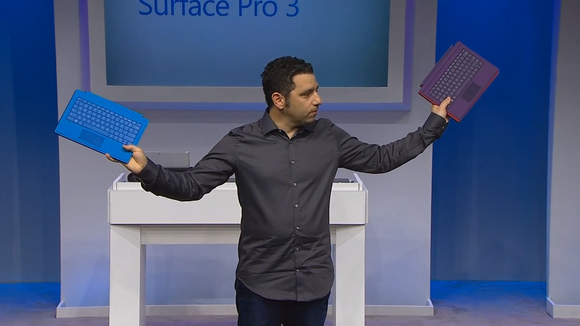 Oddly enough, you can add Microsoft to the list of manufacturers looking to kill the laptop. At its press conference in New York, the Redmond giant unveiled the Surface Pro 3, a tablet designed to replace your portable PC. There's only one problem: the Surface Pro 3 doesn't include a keyboard.

We typically wouldn't fault a tablet for not including a keyboard with the base model, but in Microsoft's case, it's hard not to, due to the cost. This $799 tablet is a premium device with a premium price tag, and because of that, it's probably not going to appeal to just the casual tablet user who wants to play Angry Birds or browse the Internet while watching TV; Microsoft is setting its sights on power users, and the company's own Surface godfather, Panos Panay, described the Pro 3 as a tablet that lives up to the promise of featuring genuine laptop functionality.

So naturally, it should include everything you need in order to use it in this way, right?

Except that it doesn't. Instead, the Surface Pro 3 requires consumers to pay an additional $130 for the Surface Pro Type Cover, raising the total price of the tablet to $929. This was also required for previous generations, but the Pro 3 has been released in a computing climate in which you can find many capable laptops and ultrabooks at prices significantly lower than $929.

Even Microsoft's arch rival, Apple, is winning in this arena. The Surface Pro 3 may beat the 2014 MacBook Air on specs and dimensions, but it fails on price point. Just a few weeks ago, Apple slashed the price of its 11.3" MacBook Air to $899. That means with the keyboard, the Surface Pro 3 is $30 over the price of the entry-level MacBook Air, not to mention the fact that previous generations are now falling to record-low deal prices. (Check out our price trend to see how low the MacBook Air can go.)

The Surface Pro 3 is bound to get rave reviews. At 1.8 lbs., it packs a 12" touchscreen 2160x1440 display, full-size USB port, a nifty new kickstand, and a 9-hour battery life. And while we can forgive some omissions (like the $200 Docking Station), the $130 keyboard is one we can't let slide — especially not for a laptop replacement whose shelf life is apparently already counting down.

What do you think, reader? Is the Surface Pro 3 worth the price? Let us know in the comments.

tammytam
One more thing. It's harder to find deals on mac products then windows. So that's a bonus for bargain hunters.
May 1, 2015

tammytam
I use multiple devices and OS's. They all offer strengths and weakness and at different point point. I already have a 15" Macbook pro. I was debating a few months ago to get macbook air for a more portable machine but then I wanted something different. I didn't want to get another macbook. I wanted something that was tablet like. I didn't get the surface pro 3 but I went for the surface pro 2. I don't need the latest and greatest but I liked the price point of surface pro 2. The deal did include a type cover. So overall it was cheaper than an older macbook air with a higher resolution screen and the newer cpu. I believe that a device should fit the needs of the individual. There are a lot more causal user who just want to browse the web and watch youtube which an ipad would satisfy their needs. I believe the surface is aiming for a specific demographic. I don't use the pen much but I would assume from the reviews that artist enjoy the functionality of it.
May 1, 2015

Lbrewer42
Anyone giving Microsoft products and Apple products a non-prejudiced trial will find Microsoft is the more user-hostile in that it takes way too many steps to do the same tasks. And these unnecessary steps require the user to memorize how to access them in order to carry them out.

Also w/ OS X, there is no headache of viruses/malware (8 years now and no malware/viruses in my system); having to re-install the operating system (why should this EVER be necessary - aren't we in 2014?); and failures of the system to "just do what I TELL you to do!"

No one can call me prejudiced since I am immersed in BOTH systems, am the ones friends come to to fix their machines (well Windows users do - have only had only a couple Apple problems in the last 8 years), and know both OSs.

People putting their emotions before their logic/experimentation; people hating to admit they spent $ on an inefficient product; and a lot of "just because I am right" type people are the real cause of the OS debate.

NerdPatrick
USB port to plug in an existing keyboard...until you get a DealNews alert for a deal on the TypeCover!
May 22, 2014

datdamonfoo
While I realize that dealnews is quite Apple-biased, I think it misses the point. You cannot find a touchscreen laptop with a removable keyboard with this high a resolution, this thin, this light for the price of the Surface Pro 3. The Surface Pro 3 with keyboard may be 30 dollars more than the Mac Air, but it has a higher resolution, a touch screen, and can function as a tablet. It's also lighter and thinner. I think 30 dollars is more than fair.
May 22, 2014

Louis Ramirez (DealNews)
@nimer I see stylus and I think of Microsoft's Tablet PC circa 2000. Granted, I've never needed a stylus, so perhaps I'm just not their target demographic. Perhaps if this had been what the original Surface Pro looked like....and not version 3.
May 21, 2014

Louis Ramirez (DealNews)
@briandadude Good catch. Updated that in the story. Thanks!
May 21, 2014

nimer
I am a huge Apple fan, but I have to say this is impressive. I would never get a Surface 3 myself, but it has an added bonus over mac: The stylus. This is not a dumb-multi-touch screen, this is a full blown professional grade design stylus with 256 levels of pressure.

TheBigCheese
I think the people this is aimed at are the same folks that fly at full refundable air fare and get their refreshments at the hotel minibar. These people aren't paying for any of these, their company is. Are there enough of these to allow Microsoft a profit? I'm sure the development costs are pretty high so I'd guess MS doesn't expect to make a profit but they do expect to get a "halo effect". But what will the ordinary workers buy from MS to make up for it? Maybe it's just to have something to show the public so they will know MS is in the mobile space even though they are not.
May 21, 2014