Why iPhone Still Has More Apps Than Android 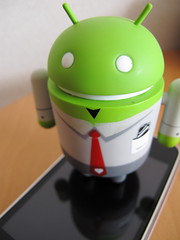 Recent reports show that there are more Android phones in the hands of consumers than there are iPhones, thanks to Android's multiple service carriers and handset manufacturers. But despite this heft for Android in the marketplace, the quantity, quality, and notoriety of apps are skewed toward the iPhone.

Why? As it turns out, it's just not as easy or profitable to develop apps for Android.

Android phones now command roughly 36% of the U.S. smartphone market, according to Nielsen, with Apple holding 26%.

On a global scale, the disparity is even higher, with Android again taking 36% of the market and Apple's iOS just 16.8%, according to Gartner research group. Nokia's Symbian came in second with 27.4% market share, RIM was fourth at 12.9%, and Microsoft rounds out the top five with just 3.6% of the global market.

But when it comes to apps, iPhone beats Android in both quantity and quality. There are differing reports pitting one platform against the other, and some say Android is on pace to beat iOS in terms of the absolute number of apps on the market. But a recent report from Appsfire paints quite a different picture.

According to Appsfire, it's not so much incorrect that Android will exceed Apple in the number of apps available, as it is misleading.

A good number of Android apps — close to 80,000 according to Appsfire – are unpublished, meaning they're no longer available for download. Android users, it seems, are much less loyal to their apps, which are less "sticky" than those from iPhone; consumers use them less frequently or abandon them altogether after downloading.

Another complication for Android is price.

dealnews readers often note that there are fewer Android deals on the site, but this isn't platform bias — it's because a majority of Android apps are already free.

"That's part of the problem," says Ross Rubin, consumer technology analyst with The NPD Group. "Paid apps aren't being embraced by Android users in the same manner as on the iPhone." This makes it less profitable to develop and maintain Android apps.

And if low potential for profits weren't enough, development can also be trickier for Android. In general, Android and iOS apps have a pretty similar design, says Rubin, but since the range of screen sizes and specifications of handsets made for Android is greater, it can be more difficult to create apps that fit them all.

And just like in the computer category, Android phones may be more susceptible to malware and viruses than Apple's. The smaller user-base for Apple computers makes it less of a target for hackers, who want to infect as many devices as possible. Google has been plagued by a series of infected apps of late, lending weight to the theory that Android phones are the bigger target.

But as far as app quality goes, there's potential for Android users (especially deal-seeking ones) to have the last laugh. Shopping, price comparison, and deal-site apps are among the top titles for both platforms, and at the moment, they're largely identical. But Rubin believes Android may offer some advantage over iOS in the future, as it's more likely that developers will create apps with "always-on" locators for the Google platform before the competition.

"It might be possible that on Android, you could do an app that always lives in the background. One that uses GPS and monitors where you are. When you walk past a store – say, the Gap – it would send a coupon," says Rubin.

Apple, on the other hand, doesn't allow developers to keep the GPS running constantly because it would drain the battery. "There isn't something like that for Android, but it could be done," Rubin says.

It's a function widely considered the Holy Grail of smartphone apps, and one that seems more likely to debut on Android than the iPhone, thanks to Google's hands-off approach with developers.

Laura Heller is a freelance writer based in Chicago who specializes in mass market retail trends and consumer electronics industries. You can follow her on Twitter @lfheller. You can also sign up for an email alert for all dealnews features.
DealNews may be compensated by companies mentioned in this article. Please note that, although prices sometimes fluctuate or expire unexpectedly, all products and deals mentioned in this feature were available at the lowest total price we could find at the time of publication (unless otherwise specified).

datdamonfoo
What bothers me even more than the blatant Apple-bias from dealnews is when people use the juvenile M$ to denote Microsoft, as if the other companies aren't about their bottom line as well.  Please use a little maturity and drop the dollar sign.
July 7, 2011

However, it is interesting to note how quickly Android is capturing market share as a mobile platform. For apps that cost a couple of dollars, to generate some serious money the app developer needs to take into consideration the target buyer audience. There's massive potential on the Android side.

Yes, it is easier to build applications on iPhone because you have to support one hardware specification; but that is not a huge barrier to proliferate the Andriod app marketplace. True - most apps are free on the Android marketplace, so if an app developer wants to make money, he/she has to bring something that offers a lot more than what is available for free out there. This is great competition and in the long run will bring more value to customers.

It will be interesting to see how Amazon's android app store changes the landscape.

carlosriosness
i didnt read the article.... i like dealnews. but i kinda find it annoying that every article they post is how apple is better then M$, or better then Google. the last few articles about apple have been about how much better they are against their competitors.

i do own a macbook air and ipod. i have owned ipads, ipods, macbooks, macbooks pros. so i am not a mac hater.

im just saying it would be nice to read an article from a android/M$ point of view once in a while.
June 29, 2011

guruboy
Great article. The loyalty, development profitability, and device diversity points are all valid today, but I think with the sheer volume of Android devices being sold (now up to half a million activations every day) the serious developers probably aren't very worried.