Apple's biggest vulnerability, its decreasing number of iPad unit sales, has become a boon for shoppers resulting in a massive increase in iPad deals.
BY:
LOUIS RAMIREZ
DealNews Contributing Writer 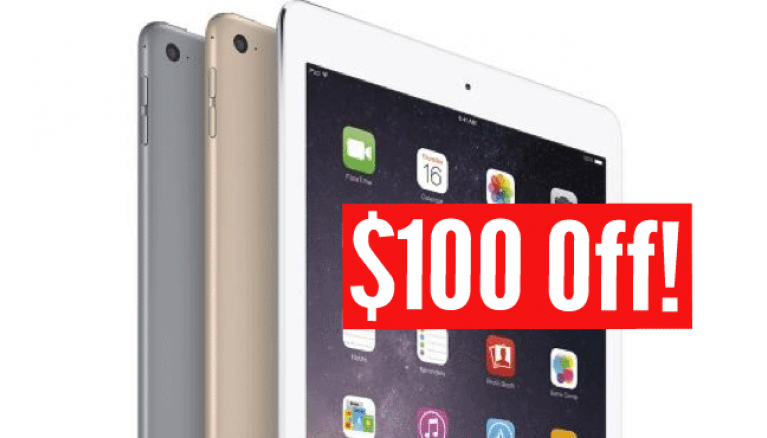 Apple's holiday quarter was one for the record books. Despite strong competition from its rivals, the Cupertino-based giant managed to grow its iPhone unit sales to an all-time high of 74.5 million. Mac sales also increased 14% to reach 5.5 million units.

The only dent in Apple's otherwise perfect earnings report was the iPad. Sales of Apple's tablet dropped from 26.04 million units in Q1 of 2014 to 21.4 million units in Q1 2015 (according to the fiscal calendar). The drop came despite Apple's best attempts to invigorate demand with its new iPad Air 2 and iPad mini 3.

But Apple's weak spot is a blessing in disguise for consumers, because as our deal data shows, iPad discounts have never been better. As such, we're predicting that 2015 will be the year of the iPad deal.

Tablets Everywhere Are Feeling the Hurt

It wasn't long ago that Best Buy CEO Hubert Joly proclaimed the end of the tablet boom. And although tablets gave laptops a run for their money, today it's tablet shipments that are starting to plateau.

A recent report by IDC indicates that tablet shipments have fallen year-over-year in the fourth quarter for the first time since the market's inception in 2010. And if you think Apple is the only company struggling, thing again. Amazon saw shipments of its Kindle Fire plummet 70% last quarter.

While its difficult to predict precisely why tablets are feeling the hurt, some analysts and industry experts have made strong cases. Among them are the rise of the phablet and the consumer's inability to work on a tablet. Sure, you can edit photos and tweak spreadsheets from your iPad, but most first-time buyers will still turn to their tablets for entertainment before productivity.

For Apple's iPad, which is the market leader in tablet sales, another factor comes into play — durability. As Fast Company argues, the iPad's longevity is causing shoppers to buy less of Apple's tablet, since older models are holding up extraordinarily well with time. Moreover, unlike the iPhone (which is exposed to harsh weather, the occasional drop on the floor, and all other manners of dirt and grime), people generally keep their iPad better protected.

But this longer upgrade cycle is ultimately good, from a deal hunter's perspective; because, as our data shows, it has led to a record number of iPad deals.

An Explosion of iPad Deals

Our deal database indicates that the tablet gloom has led to an increase in both the number and the quality of iPad deals. We've reported on the increase in Apple deals before, but lately things have begun moving faster. For instance, 2014 saw a 40% increase in iPad deals when compared to the total number of iPad deals we posted in 2013. Our number of iPad Editors' Choice deals also skyrocketed last year, increasing by an unprecedented 125%. (Editors' Choice deals are marked as such when they offer rare or all-time low prices; basically, they're exceptionally good, or better than average.)

November, one of the most important months for retailers, was also a particularly strong month for iPad deals. In fact, this past November we saw a 35% increase in Editors' Choice iPad deals compared to the same time period in 2013. While the overall number of iPad deals dropped slightly by 17%, the deals themselves were better with lower and more aggressive price points.

Bundle deals underwent a similar scenario. In November of 2013, the best iPad Air bundle came from Target, which sold the entry-level model for $479 with a $100 Target gift card. This past Black Friday, Target offered the same deal; however, this time the iPad Air 2 sold at retail price, but came with a higher $140 Target gift card — a better value by $20. So what does all of this mean for the iPad and consumers hoping to buy one?

Apple in 2015: Buy the iPad, But Don't Expect a Ton of iPhone Deals

The holiday season is known for its exceptional sales. But after the holiday season ended, the iPad Air 2's price continued to fall (albeit slightly) to $390. Nevertheless, that's an incredible bargain for an Apple tablet that has yet to hit the 6-month mark. As 2015 progresses, we predict this price will become ubiquitous with a handful of retailers offering the tablet at an even lower price point on select holidays.

The iPhone, by comparison, is seeing fewer deals. If we go back to Apple's earnings report, the iPhone saw amazing growth, reaching a record-breaking 74.5 million unit sales. iPhone deals, however, are experiencing a remarkable drop. In 2014, there was a 28% decrease in the total number of iPhone deals, versus the total number we posted in 2013.

Despite Apple shipping more iPhones, retailers are discounting it less often. But the iPad, which has shipped fewer units, is seeing an explosion of deals. While this may sound like common sense, deal hunters can use this to their advantage by purchasing the iPad now while deals are good, and perhaps being more cautious about how much they spend on an iPhone.

And with rumors of Apple launching a bigger iPad Pro tablet, complete with a 12.9" screen and stylus, deals may get even better as this could further dilute Apple's tablet lineup and cause retailers to make further discounts.

Regardless of whether the rumors are true or not, one thing is certain: 2015 is indeed shaping up to be the year of the iPad deal. Will you take advantage? Let us know in the comments below.

vanousb
Today found iPad air 2 16gig and 64 gig wireless and cellular gold model both ringing up for 199.00 at walmart. I grabbed both. By the time I had checked another walmart they were sold out.
October 29, 2016

Lindsay Sakraida (DealNews)
@gomtesh.jain I'd suggest setting up an email alert for the iPad Air 2 so you get an email immediately when we post a deal. You can do that here: https://dealnews.com/mydealnews/alert/create/
February 11, 2015

gomtesh.jain
I would love to see such ipad air 2 deals coming across this year as i missed the one last year...Can you share any latest or upcoming ipad air 2 deals as well!!
February 11, 2015

wlau89
Its great to see tablets and iPads going down in prices. It makes it all more affordable for households and becomes almost second nature to have. Think of TVs and computers, they are all remarkably low priced and deals just make them sweeter.
February 9, 2015

nimer
The funny thing about the iPad, is that even with the heavily discounted models, the secondary market remained strong. Thanks to DN, i was able to score an iPad Air for $300 ($100 off). I was very surprised when my iPad 3 (two generations old than the Air, three generations old overall) sold for $230 on eBay, and that was inline with similar iPads.

iPhone secondary market is still super strong, that's expected though with the rise of no-contract low-monthly providers, but the iPad? Surprising

Clip the $50 off on page coupon to get this deal. Buy Now at Amazon

Clip the $40 coupon to drop the price $6 below our mention in another color three days ago. Buy Now at Amazon

Most stores are charging $136 or more. Buy Now at Amazon