Which Microsoft Surface Is Right for You?

You can currently buy the Book, the Pro 4, or the 3... or none of these. We discuss the prices, specs, and uses of these would-be laptop-killers.
BY:
SIMON HILL
DealNews Contributing Writer 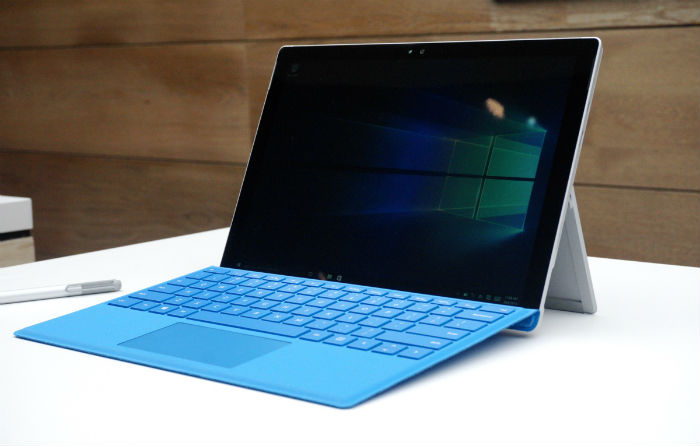 If you like the idea of a powerful, sleek tablet that boasts all of the advantages of a laptop, then the Microsoft Surface line is for you. The only question is — which model do you buy?

The original Surface tablet was launched by Microsoft back in 2012. Pitched as an iPad competitor with hybrid functionality, it doubled up as a laptop substitute with the addition of a keyboard. Though it was innovative, the original was under-powered, ran the now-discontinued Windows RT OS, and sales were poor. But Microsoft was on to something with the new form factor.

If you want a powerful hybrid tablet that can also replace your laptop, the Surface line cannot be overlooked.

Fast forward four years and Microsoft has refined the design. Now it's Apple playing catch up, with the iPad Pro series. If you want a powerful hybrid tablet that can also replace your laptop, the Surface line cannot be overlooked. In this guide we're going to take a closer look at what models are currently on offer and discuss the differences to help you find the right one for you.

What Models Are Available?

As it stands right now, you can buy the Surface Book, the Surface Pro 4, or the Surface 3. There are significant differences between each device and, to complicate matters further, they can also be configured with different processors, storage, and RAM. All of them run Windows 10, which is great for full-featured software, but lags behind iOS and Android for tablet-friendly touchscreen apps.

While the rest of the Surface line takes a tablet-first approach, the Surface Book is very much a laptop first. This is the first laptop Microsoft has ever produced and it's a powerful, beautifully designed device, but the touchscreen can still be detached to act as a tablet.

SEE ALSO: 11 Things You Need to Know About the New Microsoft Surface Book

The Surface Book is the biggest device in the Surface line-up with a 13.5" display that boasts a 3,000 x 2,000-pixel resolution. It's also quite heavy at 1,516g (3.34 pounds), but the chunkier keyboard reportedly gives it a more solid feel and includes an extra battery — which gives the Surface Book the best battery life in the Surface family, offering up to 12 hours of video playback. It also comes with the Surface Pen and keyboard.

Reviews have been pretty positive with 4.5 out of 5 at TechRadar, 87% at Engadget, and 7 out of 10 at Digital Trends. Everyone appreciated the design, display, and construction, but pricing and battery life cropped up as common cons.

If you want the most refined version of Microsoft's Surface line-up, then you have to look at the Surface Pro 4. Released alongside the Surface Book last October, it's a tablet first, but you can buy a Type Cover and connect it for a laptop experience.

The 12.3" display matches the pixel density of the Surface Book, but this is obviously a much smaller device, weighing in at 766g (1.69 pounds). That's pretty portable, but it still feels quite big and heavy for a tablet. The latest Type Cover is much improved and gives you a decent laptop substitute for when you're out and about. Battery life for video playback lasts up to 9 hours.

The Surface Pro 4 has also been positively received by reviewers, scoring 8 out of 10 at Digital Trends, 4.5 out of 5 at TechRadar, and 86% at Engadget. Everyone liked the display and the new Type Cover, but the fact that you have to buy it separately was a common complaint. There were also a few grumblings about battery life.

The baby of the bunch is the Surface 3, which was released well over a year ago now. It's the most portable device and is very much a tablet first, though you can attach a Type Cover to create a mini laptop.

The Surface 3 is very much a tablet first, though you can attach a Type Cover to create a mini laptop.

The Surface 3 was fairly well received, but it's aging now. It scored 79% at Engadget, 4 out of 5 at TechRadar, and 7 out of 10 at Digital Trends. The slim design was praised, but everyone highlighted the limited performance, which is an even bigger problem more than a year down the line.

Look for Deals on Amazon, eBay

You don't have to look too far to find discounted Surface devices. You can get a couple hundred dollars off some models if you buy them from Amazon, even though Microsoft is still the seller. You'll also find other merchants on Amazon and eBay offering discounts, but make sure you check reviews carefully and find out where the device is shipping from before you buy.

SEE ALSO: Why the Surface Pro 3 Won't Replace Your Laptop

Although Microsoft isn't making them anymore, the older Surface Pro 3 and other previous-gen models can still be found at some retailers; they're often heavily discounted. They'll continue to be supported for quite some time, and the new Surface Pro 4 Type Cover works with the Surface Pro 3. That could be a good bet if your budget is tight. We aren't expecting a new Surface model until next year.

Ultimately, the entire Surface line is well made, but they're also expensive. If you only need a tablet or you only need a laptop, then you'll generally get a bit more for your money by opting for a dedicated device over a hybrid.

If you don't mind paying a premium, the Surface Book and the Surface Pro 4 bridge the two form factors beautifully. Go for the Book if the laptop functionality is more important to you and the Pro 4 if portability comes first.

Readers, which Surface do you think is best for you? Let us know in the comments below.

martid456
Wow, no one better complain about Apples prices.
September 30, 2016

Rich_P
Last year I picked up a pre owned first gen SP for $200 including the type cover from Cowboom. It handles everything I throw at it including audio/video editing - not as fast as my desktop, but not a dog either. I see no need to replace it.
September 28, 2016

snaimpally
First, don't get a tablet with an Atom processor unless you plan to use the tablet primarily for web browsing because the Atom is insufficient to run many business applications. Instead, opt for the Intel M3, M5, or M7 processors, which are fanless versions of the I3, I5, or I7 respectively.
Second, avoid the Surface RT variants that use an ARM processor rather than an Intel processor because they have limited compatibility with many Windows applications.
Third, look at getting a refurbished Surface Pro 3 or Pro 4.
Fourth, research the many Surface wannabes as you can often find these at significant savings compared to the Surface. For example, Dell outlet recently featured deals for a refurbished Latitude 7275 tablet with folio keyboard for under $500. Refurbs of the HP Spectre X2 have also been available for under $500.