Which Carrier Sees the Best Deals on New Cell Phones?

If your current 2-year cell phone contract is coming to an end, you might be wondering what your next device will be. Will you stick with your current carrier and get whatever discounted phone it has to offer, or will you jump ship and switch to the company that offers the best smartphone deals? To help you make the most economical and tech-savvy decision, we've combed our archives to find out which phone carrier offers the best deals on the latest cell phones.

The Host with the Most (Deals)

Considering the fact that Sprint is always in third place behind AT&T and Verizon, you might have assumed that it would offer consistently better deals in an attempt to lure customers away from the other guys. However, our data suggests otherwise. Last year, we found a total of 61 deals on phones from Verizon and 60 deals from AT&T. There were 50 from Sprint — 18% fewer deals as compared to Verizon and AT&T. (Remember, a "deal" indicates a noteworthy discount, not just a price cut of any sort.)

But since 10 is not that big of a difference in number, we're going to call it a 3-way tie. No one carrier offers more deals on its phones over any of the others, at least not in excess, thus making your chances of finding a deal on the carrier you want about even. However, the quality of deals is a different matter.

The Carrier with the Best Deals 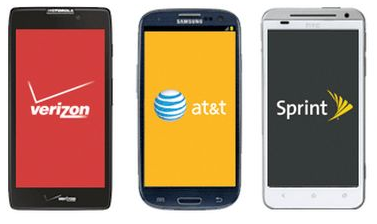 Verizon edges out AT&T and Sprint as the carrier with both the greatest number of deals and the most Editors' Choice sales. Verizon is therefore the way to go if you're looking for a new on-contract phone (if the carrier doesn't matter to you); chances are that you're going to find a great deal — on a phone you really want — on the Verizon network. Does this mean you should only look at Verizon's offerings? Of course not. But probability predicts that you're slightly more likely to find a great smartphone deal through Verizon.

Wait, What About the iPhone?

According to our data, if you're considering buying an iPhone, at this point, it doesn't much matter which provider you turn to. Over the past year, when we've found notable promotions on the iPhone, it has generally extended to all three carriers. This is largely due to third party sellers like Walmart and Fry's, both of which offered the iPhone 5 at a discount recently (for $127 and $126, respectively).

While there are periods in which you're more likely to find a deal on new iPhone models (for example, 2 months after a new model debuts, we've seen deals that take about $30 off), we didn't find a point in the year in which iPhone deals across the board spiked. That said, we saw a large number of iPhone 5 deals in both December and January, three to four months after the phone's debut.

Noticeably absent from our list of carriers is T-Mobile, which recently announced that it will be ending cell phone subsidies. This effectively eliminates common subsidized deals on new handsets from the carrier. If you're looking to buy a new phone from T-Mobile, you're going to pay full price, barring any surprise sales or promotions.

Have a particular phone in mind that you want? Set up an email alert now, and, regardless of the carrier, we'll send you a message as soon as we post a deal to the site.

Jeff Somogyi is the dealnews Media Editor. He believes that the best cell phone is a cheap cell phone. (As long as it's also the newest one, too.) Read more of his thoughts on Google+, Twitter, or on his blog.

Lindsay Sakraida (DealNews)
@vincentjones This isn't about getting a cheaper phone BILL. It's an article about the carriers that provide the most frequent and steepest discounts on phones.
February 21, 2014

vincentjones
I start to question whether deals on this site can save me money after reading this article claiming Verizon is the best place to get a cheaper phone bill.
February 17, 2014

Lindsay Sakraida (DealNews)
@MisterD This was written before T-Mobile actually put it's plan into place. It claimed that it would drop subsidies, but it's effectively the same thing as they'll let you pay a portion up front and pay off the rest in installments. Which is strikingly similar to the subsidy plan they claimed they would do away with at the time that this was written. That said, it's worth pointing out that they aren't locking you into a contract in the process, so there's not as much incentive to offer really significant price cuts on the phones.
December 13, 2013

MisterD
Faulty analysis. T-Mobile offers low and no-price up front costs for new phones, often with lower costs for the life of two-year contract on other carriers.
December 13, 2013

vincentjones
Verizon ?? Seriously, if only you do not mind the sky high phone bill.
February 19, 2013

bobminer
We have 5 phones for the family, but none of them are smartphones. We have no use for them. Which carrier has the best deals for non-smartphones?
February 19, 2013

atariguy
T-Mobile did say they'd be ending subsidies, but they haven't actually done it yet. However, one thing they have done is made it so that if you get a "Value" plan, you can either finance a phone or buy one upfront and you save a ton of money over a subsidized phone.
Probably the best deal right now, if you can afford it, is to pay Google (not T-Mobile, who marks it up) for the Nexus 4 and use it with a T-Mobile value plan. It will save you hundreds of dollars.
February 19, 2013

24KARAT
I too would like to know your opinion re: Virgin Mobile and any / all other prepaid carriers.

VIEW ALL
Blog · Buying Guides · 1 hr ago
The 7 Best Things to Buy in July (It's More Than July 4th Sales!)
Independence Day sales are everywhere in July, but the savings go far beyond that one holiday! Check out our guide on what to buy in July and what to avoid until later in the year.
Blog · Morning Jolt · 16 hrs ago
5 Deals You Need to Know Today: Light Bulbs from 49 cents at Ace Hardware
On your marks it's bright savings! On light bulbs. At Ace Hardware. Check out this offer and more in our roundup of the five best deals we found over the last 24 hours.
Blog · Buying Guides · 1 day ago
24 Items Worth Buying on the Northern Tool Website
If you're in the market for new tools, it's worth shopping a dedicated tool retailer. Check out our diverse list of what to buy on the Northern Tool website, whatever project you're planning!
Blog · Roundups · 2 days ago
Affordable Gaming Laptops
If you're looking for our current list of the finest gaming laptops at the finest available prices, welcome. There's deals aplenty on high end laptops and more budget conscious options as well as some associated accessories that might enhance your overall laptop gaming experience.
Blog · Consumer News · 2 days ago
The 158 Best Military Discounts in 2021
If you're an active-duty service member or veteran who's searching for military discounts, we have good news! Our guide to the best military discounts in 2021 tells you where and how much you can save.

Apply coupon code "DNEWS908621" for the best price we could find by $6. Buy Now at UntilGone