With the Super Bowl upon us, you might be starting to look at your television, wishing for something with more oomph to make the biggest sporting event of the year really pop. Today's TV has evolved into a multipurpose device that can stream movies, browse the Web, and keep you connected to your social network of choice, so if your TV can't do all that, you ought to be on the look out for a new fully-equipped set — especially since it's a buyers market.

Since the Super Bowl is around the corner, and we recently just viewed a parade of new HDTVs at the Consumer Electronics Show (CES), we decided it was a good time to take a look at what kind of deals a tech enthusiast/sports fan can expect to find on modern-day HDTVs. With a focus on what screen sizes are seeing the best discounts, we've combed through every HDTV deal posted in the past year to find out. Below are the results, and note that you can enlarge each chart by clicking on it. 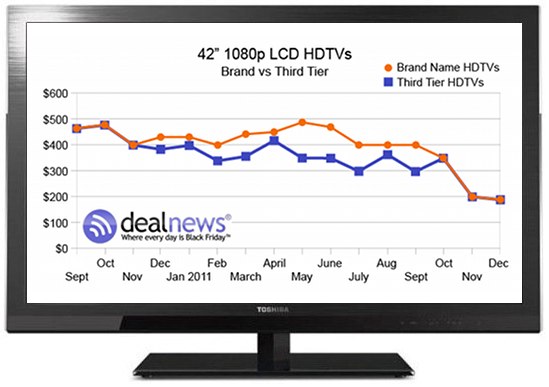 42" 1080p LCD HDTVs
While the TV industry is focusing on 55" sets and beyond, it's the humble 42" set that's seeing the biggest discounts. In 2011, 42" TVs dropped a whopping 53% in price, hitting an unprecedented $189 price point. Budget-minded shoppers looking to buy a new HDTV should look no further — here's where you'll find the best deals.

Price to Buy: Although we saw a 42" set go for as low as $189 over the holidays, it's still not common to find a 42" HDTV set priced that cheaply. Instead, we recommend keeping your eyes peeled for models at $349 or lower, which is still an unbelievably low price for these TVs. 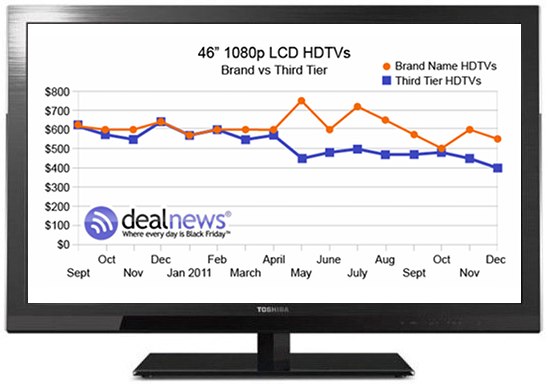 Price to Buy: Third-tier 46" LCD HDTVs have been hovering in the $400 price range since May of 2011. If you see a deal at $450 or below, we suggest going for it. As far as brand name TVs are concerned, anything below $575 would offer the most savings. 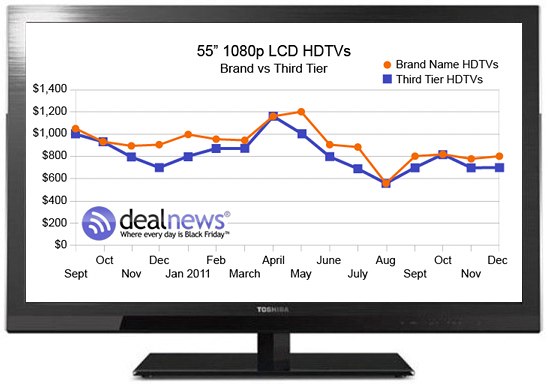 55" 1080p LCD HDTVs
Although they were once considered the epitome of HDTVs, 55" sets are taking a backseat to even larger 60" sets. For the consumer, that's good news as we saw prices on 55" HDTVs drop 36% — the second lowest drop of the bunch.

Price to Buy: More deals on 55" HDTVs translate to better prices. For generic sets, we recommend looking for deals at $700 and under. Brand-name sets will cost you roughly $100 more, as we frequently see them reach the $800 mark. 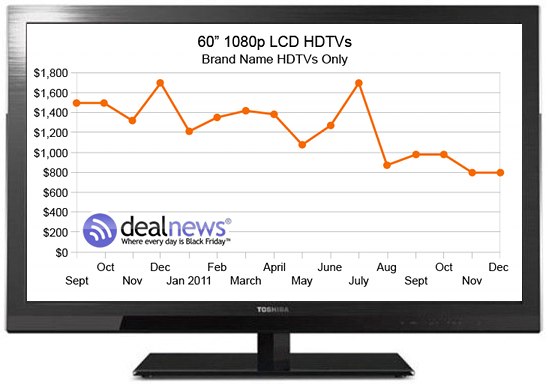 60" 1080p LCD HDTVs
This past holiday season we saw a variety of 60" sets on sale, making the 60" HDTV the new holy grail of home theater. In 2011, prices on these televisions dropped 33%. However, the majority of the deals came from generic manufacturers, as name-brand HDTVs in this category are usually still in the $1,200+ range.


Plasma HDTVs
LCD technology may be enjoying its time in the limelight, but don't count plasma out just yet. In fact, 60" plasma HDTVs dropped 37% in 2011. Buyers looking to maximize their dollar should look for prices between $800 and $960. Even better news: most 60" plasma TVs are made by brand-name manufacturers. So if you have your eyes on a big-screen TV, you'll save a considerable amount of money by going plasma.


The Bottom Line
Selecting a new HDTV should not be an impulse buy. Keep track of features you want in a home theater system and be sure to measure for the appropriate size HDTV for your space. If you're looking for the absolute hottest deals, turn to 42" LCD HDTVs. Deals on these sets are bountiful, and we're seeing new lows each month. For consumers who already own an HDTV, well, there's never been a more affordable time to own two.

Sports fans who want a more immersive experience however should skip the 46" set and upgrade to 55" or 60", assuming you have the space. Our deals archive shows that you'll find better bargains on these sets (for what you're getting) than on 46" sets. We also expect the number of sales on 55" and 60" sets to increase throughout the coming year.


Check out our Super Bowl deals section or set up a customized email alert for the TV and price of your choice.

Lindsay Sakraida (DealNews)
Actually, the only size specification in which we saw a better deal over the summer than we did during Black Friday to now was the 55". The other four saw cheaper deals AFTER the summer. The guide we publish for when we'll see the best deals aren't absolute, because sometimes a retailer will change things up and offer an unbelievable deal when no one's expecting it. That's why it's important to also keep an eye on the live deals we publish, and use the price comparisons we pull for each individual deal.
January 17, 2012

VIEW ALL
Blog · Roundups · 42 mins ago
The Best Patio Furniture Deals
From dining sets to fire pits to clearance sales, let the experts at DealNews guide you to the best discount patio furniture available today.
Blog · Morning Jolt · 3 hrs ago
5 Deals You Need to Know Today: Save $30 On the Brand New iPad
The iPad's newest iteration has a preorder price-drop celebration, so with no undue hesitation let's see this fun Friday temptation. Check out this offer and more in our roundup of the five best deals we found over the last 24 hours.
Blog · Roundups · 1 day ago
The Best Smart Home Deals
Whether it's a smart assistant, a security hub, a smart lighting setup, or one of the many other home automations on offer, these are our picks for the best smart home deals available right now.
Blog · Roundups · 3 days ago
Affordable Gaming Laptops
If you're looking for our current list of the finest gaming laptops at the finest available prices, welcome. There's deals aplenty on high end laptops and more budget conscious options as well as some associated accessories that might enhance your overall laptop gaming experience.
Blog · Roundups · 4 days ago
The Best Tool Deals
We've rounded up the best deals on tools, accessories, combo kits and more – from beginners to hobbyists to pro-am and beyond, look no further for your cheap tool needs.

That's the best price we could find by $11. Buy Now at Home Depot

Apply coupon code "50FH1YBU" to take half off. Buy Now at Amazon

Apply coupon code "SAVE17" to save $410 off list price. Buy Now at Dell Technologies

Check in any day (including weekends) through October and save at least $12 per night. Even better, for an additional $10 per night, you'll receive a $25 credit to use at the hotel's restaurants, so there's a free $15 to spend at its pool-view bistro or rooftop bar. Buy Now at Travelzoo

You'd pay $25 for this via other sellers. Shop Now