Water on the Brain: A Guide to Cooling Your PC with Liquid 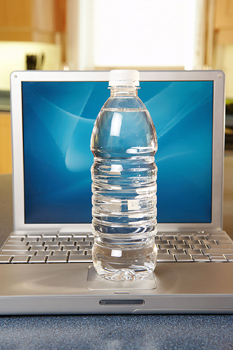 Remember when you were a kid and your parents always told you to keep electrical stuff away from water? Well, blow drying your hair while standing in a tub of water still isn't wise. But when it comes to your desktop computer, water and electricity can actually work in your favor.

I'm sure at this point some of you are thinking that it's time someone put ol' Dan in a straightjacket and send him off for an extended visit to the Ha-Ha Hotel. But hear me out: the PC modding community has been water- cooling their personal computers for years, and it's caught on to the point that major manufacturers are selling self-contained water cooling kits. And here's why: 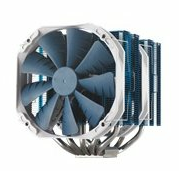 A Breath of Fresh, Cool Air

If you turn off your media player in your computer for a second and listen — really listen — you'll hear a gentle (or, in some cases, not so gentle) whirring sound. Those are the fans in your computer. There's one for the CPU, and, if you do any sort of semi-serious gaming, you'll have one for the video card. Plus, you'll have at least one exhaust fan. Your computer needs that much air because it generates a lot of heat. You could compare it to your car; if the temperature of the motor gets too hot, it's going to stop working. Your computer probably won't die if it overheats (because most have fail-safes built-in for that), but it will definitely fail.

To keep the CPU cool, its fan-based cooling system involves copper tubes or fins, or both, that move the heat away from the CPU. To further dissipate the heat, a fan blows air across the fins, cooling it down to the point where it can pull more heat away from the CPU. One of my personal favorite fan-based CPU coolers is the pictured Phanteks 140mm UFB (Updraft Floating Balance) CPU Cooler ($84.99 with free shipping, a low by $5). 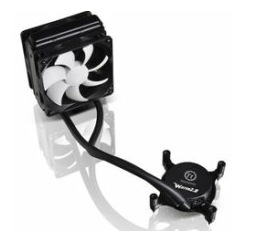 Water Proves to be More Efficient

Flowing air has been doing a pretty good job of cooling your computer for many decades now, but let's look at the pure physics of it for a second. The thermal conductivity of water is roughly 25 times that of air. So this gives liquid cooling a major advantage over air-cooling. Why? Because liquid cooling yields a much greater heat transfer.

The notion of using liquids to cool hot PC parts has been around since the early 1980s, notably in the form of the Cray-2 computer. (Remember those? Yeah, neither do I.) Since then, the hardcore modding community has been building their own liquid-cooling kits for custom computer applications. Now it's your turn.

Time to DIY: What You'll Need to Get Your PC Wet

There are a number of cooling kits on the market for first-timers. The self-contained kit offers a complete and already-sealed water coolant, straight from the factory. Really, all you need to do is install the heatsink/pump, attach the fan to the fan port at the back of your case, and you're ready to go. The above-pictured Thermaltake Water 2.0 Performer Liquid Cooling System ($49.99 for newsletter subscribers via coupon code "EMCYTZT1734" and $10 mail-in rebate with free shipping, a low by $15) features twin 120mm fans (make sure your case can support a 120mm fan at the back) and an aluminum 151mm radiator.

Another cool cooling kit is the Corsair Hydro Series H60 Water Cooling Kit ($60.24 with free shipping, a low by $7). Like the Thermaltake unit, the Corsair Hydro 60 uses 120mm fans and a slightly larger 152mm radiator. The main difference between these models is the micro-channel cold-plate design and FEP (Fluorinated Ethylene Propylene) tubing which reduces evaporation of coolant in the sealed system.

Make Sure You're On the Case 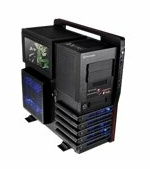 So let's say you bought your computer case 10 years ago and the cooling fan openings can only handle 60mm fans, or at best 80mm. You're going to need to ditch that case, unless you want to bust out the dremmel and do some heavy modding. In reality, you'd be better off buying a new case that is already set up for watercooling.

My next PC case purchase will be the Thermaltake Level 10 GT LCS ATX Full Tower Case ($309.99 with free shipping, a low by $1), since it has just about everything you'll need for water cooling now, and for at least five to six years down the line. It's got enough room for a full ATX motherboard, a pre-built Bigwater 850GT liquid cooling system (that takes up two 5.25" bays) with a 240mm motorsports radiator with 120mm exhaust fans, high-performance pump, and CPU water block. It also includes USB 3.0 ports, five EasySwap hard drive bays, a 200mm tri-colored LED fan, eight expansion slots, cable management system, and more.

With these kits, we've actually only touched the surface of cooling your PC with liquid, but this should give you a good starting point for your future upgrade. We'd love to hear your thoughts and if you are going to build or add water-cooling to your system.

Dan Leadbetter is a staff writer for dealnews and a member panelist on the weekly dealnews podcast. When he's not trying to tighten his tolerances or figure out his own viscosity, he likes to drill for oil in his back yard, or drink someone else's milkshake. You can follow his misadventures on Twitter @danleadbetter.

MWFplus3
I see what dealnewsLindsay means about prices constantly changing...the Thermaltake 2.0 can now be had for $50 from Newegg after rebate, when you enter coupon code EMCYTZT1734 at checkout.(might be for newsletter subscribers only)
June 11, 2012

Lindsay Sakraida (DealNews)
Ah, I was referring to a different model. Apologies. We went through and updated all the deals to ensure they were current, and the Corsair H60 was indeed $60.24 at both http://Buy.com and Amazon. Thanks!
June 11, 2012

Lindsay Sakraida (DealNews)
Thanks for noting the price drop; as you probably know, deals sometimes change quickly, and we try our best to make sure the features represent that. However, I'm not seeing an Amazon deal for $60 flat... I can only find that model offered through TigerDirect for $59.99 with $7.19 shipping.
June 11, 2012

MWFplus3
Good overview, thanks...the Thermaltake 2.0 is now $60 on Newegg after rebate...the Corsair can be had for about the same price ($60) on Amazon with no rebate...I would also add that you need to make sure you check compatability with your CPU socket...not all (but most) will fit.
June 11, 2012