Want to See Cuba Before It Becomes Overrun With U.S. Tourists? Now Is the Time to Go

American travel to Cuba has already increased by 50% in the past year, and that's only going to continue with this latest announcement.
BY:
PAULA BRADLEY
DealNews Contributing Writer 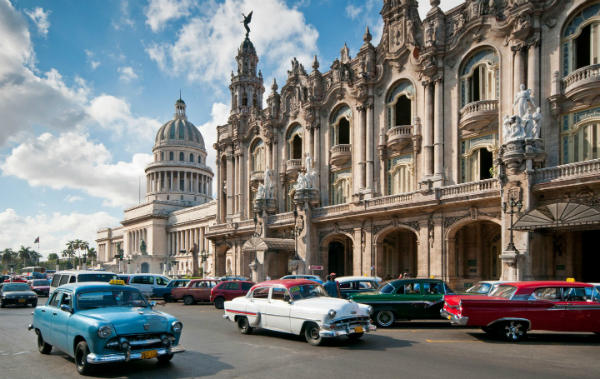 The latest development in the gradually-thawing relations between the United States and Cuba came yesterday when the U.S. announced that the two nations have agreed to resume commercial air travel.

Naturally, we got very excited by this. After all, Cuba has been off-limits to Americans for "tourist activities" for over half a century. Anyone wishing to visit the country has needed a specific reason to do so, such as educational, humanitarian, and "people to people" trips.

Flights Will Be Easier to Book, But Travel Is Still Limited

But does yesterday's policy change all that and open Cuba up to the tourist industry? The simple answer is no; the embargo on tourism to Cuba still hasn't been lifted by the U.S.

However, the new agreement means that commercial airlines can begin operating regularly scheduled commercial flights between the two nations. The U.S. State Department said there could be as many as 110 roundtrip flights per day, which would more than quadruple current traffic. This would include twenty daily flights between the U.S. and Cuba's capital, Havana.

For tourists wishing to travel to Cuba, the most significant change from this agreement will be an improvement in infrastructure and traveling systems. Up until now, travelers have had to book a chartered flight to Cuba, which is difficult to arrange online. The agreement is also expected to eliminate the long-standing (in both senses) tradition of checking in four hours before your flight.

A Stepping Stone to Open Tourism

Thus, the announcement doesn't fling the doors open to U.S. tourism, but it's probably a necessary intermediary step before we get there. Because of the limitations on travel for many years, modern airlines don't have the necessary presence in Cuba to accommodate mass tourism. This gradual move towards normalized relations might allow carriers to build out a working system before the doors are officially open.

Visit Cuba Now, Before It's Overrun With Tourists

While many people would love to see Cuban travel be completely open, some may argue that such a change would herald the end of an era. Skeptics worry that the opening of Cuba to American tourists will diminish the country's unique character and create another satellite state (as Cuba was until relations went cold in the 1950s). In fact, despite the existing limitations, "travel by U.S. citizens to Cuba has surged more than 50% in the past year," according to the Wall Street Journal. Already, tourism has ballooned.

If you want to see Cuba before this happens, then your time might be slowly running out! Check here for current travel requirements and check out our travel deals page for educational escorted tour packages. Our top pick is this Havana, Cuba 4-Night Escorted Tour Vacation for Two starting from $4,358 (low by $1,040; expires January 31, 2016). This package includes comprehensive, guided activities and cultural exchanges including a conversation with a Havana resident about life in Cuba today and their hopes for the future.

R1one
hope they will keep the car as it is....if they change too much than no point of going to cuba
December 28, 2015

Scroogus Maximus
"Escorted tour" translated: Saddled w/a Government Minder.
"Conversation with a Havana resident": Carefully vetted & controlled script run-through. Deviations may result in the execution of said resident, so please stick to your lines and don't ask any questions not prompted by your Minder.
December 28, 2015

dliidlii
Those prices are no deal. You can book your own flight and find a place to stay for less than half this "deal" price.
December 28, 2015

mike01001
I hear Russia and North Korea are beautiful this time of year if Cuba gets too overrun. Considering the number of other islands in the Caribbean that have modern amenities, why would anyone want to go to Cuba.
December 28, 2015

Snoopturk
I agree with markey. I would not give this fascist regime a dime of my money..
December 27, 2015

markeymarc
Really, you are promoting travel to Cuba when the country is in shambles? Where major human rights violations occur on a daily basis?

If are really are interested in seeing poverty, just go to Mexico or Dominican Republic or elsewhere and you won't have to pay OUTRAGEOUS fees to the government.

"including a conversation with a Havana resident about life in Cuba today " Really, you think these are everyday people? No, they are just mouthpieces of the government.