Wallet Pwned: You Won't Play 26% of the Games in Your Steam Library

Steam bundles net you tons of games for next to nothing. But are you getting your money's worth if you never play those games? We explore the seductive charm of the Steam sale.
BY:
MICHAEL BONEBRIGHT
Former Senior Blog Editor 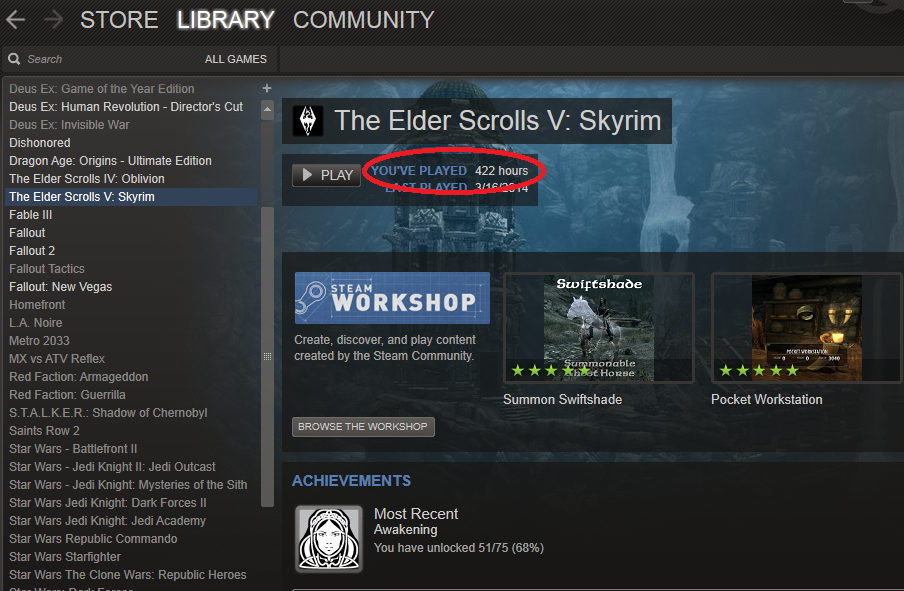 A recent article published by Ars Technica says that millions of gamers are buying games they don't want from Steam. "About 37% of the roughly 781 million games registered to various Steam accounts haven't even been loaded a single time," the article reads. A recent update to that article (discussed in detail below) suggests that 26% of games bought go unplayed . Because Valve's Steam store has captured a staggering 75% of the global market for PC games, this means that the vast majority of PC gamers have probably wasted their money on an unwanted game at some point. That includes me.

The image above is a screenshot of my Steam library, in all its glory. While my various Dovahkiin alts were committing dragon genocide in Skyrim for 422 hours, I was obviously not playing anything else. But I have played other games, and you can see them along the side of the screen. The highlighted game titles represent ones that I've installed on my system. But as you can see, the vast majority of games I bought have not been installed. Often purchased during Steam's magical sales, bundled with countless other games, these greyed-out video game titles represent the lie I tell myself — that these bundles are a great deal.

Everyone Loves Buying Games, Not Playing Them

Even if you don't use Steam, its very successful ultra-low-price bundle model has crept into digital PC game sales across the board. If you're not buying unwanted games from Steam, you're probably buying them from Amazon, GOG, Green Man Gaming, GamersGate, or any other number of sites.

There's no question that game bundles seem to be the driving force in Steam library bloat. "Some games (mostly free-to-play titles) show practically 100% of all 'owners' putting in at least a little bit of playtime," Ars Technica reported. "Others, primarily those that are often offered in bundles or as part of sales, are played by only a sliver of the registered owners on the service." The article data shows that 36.9% of games go entirely unplayed, with an additional 17% being played for less than one hour. Together, that means players are wholly uninterested in almost 54% of the games they buy! Compare that to the mere 10.9% of games that are played for more than 30 hours.

UPDATE: Ars Technica has since revised its numbers, due to a calculation error in its scraper program. Because Steam has only tracked the "number of hours played" statistics since March 2009, many popular games played before that date were considered "unplayed" by the program, skewing the statistics. When games bought before March 2009 are removed, the corrected data shows that 26.1% of all bought games are never played, and another 18.9% are played for less than one hour. That's a not-insignificant 45% of bought games that were essentially a waste of player money. For comparison, the new data shows that only 13% of games are played for more than 30 hours.

These Prices are Insane!

One might ask, where's the harm in buying a bunch of filler games to get one or two really good titles in a bundle? The problem is that bundles, by their very nature, have inflated value. We see a collection of 10 or more game titles offered for maybe a $1 a piece, and our dealhunter brain lights up like a Christmas tree.

But take a step back and think: why would the Steam store be selling so many of these games so cheaply? Valve doesn't release any information about its cut of game sale profits, but a lawsuit against now-defunct publisher THQ suggests that Steam might be getting a 30% cut from developers. Thirty percent of $1 — or 30 cents — doesn't sound like a lot of money.

But hold on, because that's not the whole story. "A few huge ultra-hits are driving the majority of Steam usage," Ars Technica said, noting that about 4% of game titles, the top 110 sellers, make up about 50% of registered Steam sales. "By contrast, the bottom 1,000 games, which have sold less than 30,000 copies each, represent just 1.6% of all the registered games on Steam." These under-performing sellers are the games you'll often see thrown into bundles. By putting a bunch of unwanted games into a bundle with a couple popular titles, Steam is turning a non-selling game into a sale. Thirty cents isn't a lot of profit, but it's a heck of a lot more than zero.

When a Game Library Becomes an Actual Library

Let's be clear: Paying $10 for 10 games that each cost $30 or more at some point is a decent deal! Steam's sales have revitalized PC gaming as an industry, and are so good that there are actual guides on how to shop them.

Also, sometimes it's ok to buy a game for the sake of buying it. I've bought older games in Steam sales that I can't even play without mods, patches, or emulators, but I bought them because I wanted to have a copy of a game I loved. (System Shock, Fallout, I'm looking at you.) And you never know when a bundle will expose you to a game you never knew you were dying to play. Steam bundles are what you make of them ... just make sure you're getting your money's worth.

Readers, how many Steam games are taking up space in your library of shame? Do you make an effort to try and play everything, or have you been seduced by too many bundles? Share your secrets below!

michael bonebright (DealNews)
fatmanosu--
There is another category in the Steam library that I didn't mention: games bought, beaten, and then uninstalled to make more room for new games.

Everyone should play the Star Wars games -- crashes, patches, emulators, and all.

fatmanosu
You should play some of those Star Wars games. I wish Steam would fix the games that need mods. I have bought some games to find out install will never happen.
April 17, 2014

Vision_From_Afar
The very reason I've stayed far, far away from Steam sales. I'll let the Mrs. go crazy. All the better for me now that you can share your Steam Library. :D
April 17, 2014

Risrepkel
All the indie bundles get me. For each bundle I buy, there's like one game I want and 5-6 games that will never see the light of day.
April 17, 2014

theTorrey77
The Steam Sales make it REALLY hard to resist a title. Then the next step is finding the time to play it.
April 17, 2014

Mael
Great article. These figures are largely accurate for my 150+ library. And if you include playing to completion in the mix, it's much much worse. I estimate that 1/3 of my games are installed for no more than an hour before I move on. Shamefully, in some of those cases it was simply to get the trading cards.

That said, I don't think it is always the fault of the bundles. Sure, we get bundled games that we couldn't care less about, but by in large, I always have the best of intentions. Tomb Raider bundle? Sure, I'll play all of them in order! In the end I play the first one for 20 minutes and then jump right to the most recent because that's what I really wanted. I also do buy titles that I already own (System Shock 2, Thief Gold, early XComs) because they're generally patched and ready for modern systems.

I've recently been making an effort to play through my games but with the Summer Sale right around the corner, I'll always be behind the ball.

Still, pretty sure as far as money spent vs. time spent playing, Steam is still crushing the App Store.

I tend to be a bit of a hoarder. In recent years the games, books and movies have gone digital. So, at least I am less likely to be found dead under a pile of physical property.
April 16, 2014

michael bonebright (DealNews)
illkitty--
You'll get no judgement from me! I've bought KOTOR twice from Steam, and I own a physical copy. The bundles get us all in the end.
April 16, 2014

illkitty
Oh, the Shame!!! I am a horribly good example of someone who falls in love with the sales more than the games. It's like Pokemon, because I... gotta BUY em all... when the deals are so good! The problem is that unless a real zombie apocalypse hits (...but somehow power plants continue to work & you have a lifetime supply of Hot Pockets), I'll never find the time to install even half of my games, let alone play them.

All STEAM Junkies know the best time to purchase games are during the Summer & Winter sales, where Games are slashed to as much as 90% off. However, it's easy to get caught up in buying games you wish you played.

So, I once bought Batman: Arkham Asylum... in another sale I bought it all over again in a Bundle, to get the sequel Batman: Arkham City with the Add-Ons for less that buying them separately. Not having installed/played the first game at all, and without being able to gift my extra copy, I simply own the first game twice! /facepalm
April 16, 2014

Petrograd
48% unplayed. I have a bad habit of buying Steam Indie Packs or Humble Bundles for a single game...
April 16, 2014