Travel Plans Ruined? Some Advice to Get By 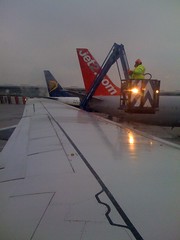 As another major winter storm slams the country — from New Mexico to New England — the National Weather Service has issued a Winter Weather Advisory for most of the United States, predicting up to 12 inches of snow in places like Tulsa, not to mention Chicago, New York and Boston.

Preparing for "historic" snowfalls isn't easy for places that aren't used to winter storms, and the airports are usually the first to react by grounding flights. Bloomberg Businessweek reports that over 4,000 flights have already been canceled, and The New York Times voices the concerns of city officials all over the nation about how to prepare for this latest wave of storms. Even if cities like Chicago are scrambling to get ready for the 18 inches of snow that could put the city to a halt, it doesn't mean that the citizens and stranded travelers cannot be prepared for the worst.

After digging around for some of the best advice for people stranded by flight cancellations, we found some useful tips and ways to make the best of the situation. When storms hit the east coast in late December, CBS published an article with some suggestions about the best and easiest way to rebook a flight. "Never schlep to the airport without good information," adding, "The last thing you do is go online." I can safely agree, since friend of mine who was visiting from out of state during that storm had to extend her stay for almost a week.

We learned that it is always best to speak to a human being, especially since the online flight information may not be correct, as in our case, and you can get advice about flight options over the phone. If you can crash on a friend's couch wherever you are stranded, it's better to rebook since the airline will not pay for a hotel if you get stuck in your connecting city. For those who absolutely must travel, CBS also suggests packing your own food and carrying a wireless card since most airports don't offer wireless. The best advice is to lower your expectations if you plan on staying at the airport; the wait could take days.

People who are traveling by car may also need to change their plans because of hazardous road conditions. One option we found in The Rhode Island News is to simply make the best of it, which is what Stephanie Nelson and Dan Shine chose to do when they couldn't get home to Pennsylvania during one of January's storms. Instead of worrying about schedules and keeping appointments, they chose to enjoy a glass of wine at a bar while they decided on where to make dinner reservations.

If you are stuck at the airport, you may want to catch up on the misadventures of AOL travel and personal finance writer Jason Cochran, who was stuck at JFK airport in New York for two days during the blizzard in December, and tweeted about the lousy experience the whole time. His tale may make you think twice about even heading out to the airport if the weather is bad.

Whether you are stranded at an airport or at home, there's always the classic American pastime: shopping. Why not take the opportunity to purchase that novel you've been wanting to read (even airports have bookstores)? No matter where you live, as a dealnews reader, you know there's always on online deal to be found right in the warmth of your own home.

Ashley Watson received her MFA from Goddard College in January 2006. Upon completing her degree, she taught writing composition at the University of Arizona and began her career as a freelance writer. She is a contributor to the 2007 Teacher's Guide to Living Literature: An Introduction to Fiction, Poetry and Drama, and she has published articles in various online and print magazines. She currently resides in Vermont.

VIEW ALL
Blog · Morning Jolt · 9 hrs ago
5 Deals You Need to Know Today: Discounted Outdoor Power & Lawn Equipment at Amazon
Amazon has five lawn and outdoor power tools discounted for your purchasing convenience. Check out this offer and more in our roundup of the five best deals we found over the last 24 hours.
Blog · Buying Guides · 3 days ago
What's the Best Time to Buy Big-Ticket Items?
Savvy shoppers are always on the lookout for a great deal, and to help you out, we've put together guides on the best times to buy big-ticket items.
Blog · Buying Guides · 4 days ago
Ask an Expert: When Can I Expect a Price Drop on the TV I Want?
Do you have a question for us experts here at DealNews? If so, submit it and we might just answer it in a future column! Until then, check out our first column, which offers advice to a cost-conscious TV shopper.
Blog · Buying Guides · 4 days ago
59 LGBTQ-Owned Businesses You Can Support This Year
June is Pride Month, so if you're looking for a spate of LGBTQ-owned businesses to support with your wallet, we've got you covered! Check out our guide for 59 shops to check out now, as well as tips on how to find more.

Save an extra 10% on already discounted kitchen items with coupon code "MEMORIAL10". Shop Now at Target

It's $10 below our mention from three weeks ago and the best price we could find now by $10. Buy Now at eBay

It's a savings of $5 off list. Buy Now at Walmart