Ting: A New Mobile Service That Refunds Unused Data, for Android Users Only 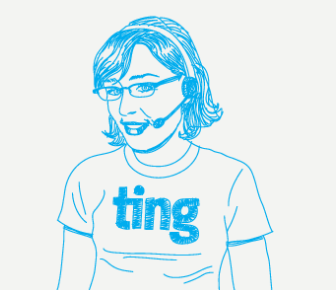 Chances are that no matter how sophisticated your smartphone has become, you've probably been fed up at one time or another with limited calling plans or the cost of overages. But there's a cell phone service that employs self-styled goal to change all that: Ting. Launched just this past February, Ting operates a no-contract mobile phone service on the Sprint network and charges monthly fees based on your actual data usage.

If you saw our deal last month that took $50 off your first cell phone or data device from Ting (now expired), you may have grown intrigued by the flexibility that the service promises. And at first glance, Ting does look ready to shake things up and offer an opportunity to save money. However, it also merits a closer look, namely at its cost structure and suitability for different types of cell phone users. Here's a quick primer on the Ting service and what it does — and doesn't — offer consumers.

How Does Ting Work and What Does It Cost?

Because there are no contracts involved, signing up for Ting is as simple as clicking your mouse and buying a phone. To get a better idea of pricing levels, you can look at Ting's rate plans, which are clear-cut and easy to understand. For starters, you'll pay $6 a month to hook up to Ting's Sprint network. Then you select your ideal talk, text, and web plans based on the amount of minutes, text messages, and megabytes you want.

The benefit here is that you'll receive a credit for whatever you don't use. Some surcharges include directory assistance ($1 per call) and traveling calls. (A call from Mexico to the U.S., for example, runs $1.50 a minute.) If you go over on your minutes, Ting bumps you up to the next service level and you pay that amount. Freebies include voicemail, picture and video messaging, 3-way calling, caller ID, tethering, and free WiFi hotspots.

What Are the Chief Advantages?

While many cellular service providers hit hard with hefty overage charges, Ting's floating system offers a fool-proof way of bringing clients to the usage levels they belong; there are even pricing discounts for higher tier usage plans. And as stated above, you won't have to worry about overbuying and getting stuck with minutes or texts you'll never use; Ting moves you down to the right billing level based on actual usage.

Any Disadvantages to Ting?

Sadly, there's nothing here for the Apple iOS crowd (see below), and phones/devices are limited to those you purchase within the Ting system — right now Ting only offers a handful of Android options, that cost from $70 to $485 and include the Kyocera Milano ($145), the LG Optimus S ($170), and the Samsung Galaxy SII 4G ($485). While you can bring your own phone number, Ting requires that you purchase one of their mobile devices. So no, you can't bring your own phone to Ting — not even a Sprint phone, as Sprint seems intent on making its already-contracted customers stay put in its conventional (and lucrative) contract system.

If you're a fan of what Ting has to offer, but remain a devout iOS user, you may be out of luck, as Ben Lucier, the director of customer experience at Ting, recently had this to say in a blog post: "We're big fans of Apple and all that they've accomplished with the iPhone. Perhaps one day we'll be in a position to offer it to our customers, but currently we have no plans to offer the iPhone. As for Windows Phone, we like that OS and some of the hardware that runs it, too. Again though, no current plans to offer it."

Lucier seems open-minded about the subject, so perhaps hard lobbying from iPhone fans might create some sort of movement in the Ting pipeline. Then again, Apple would have a lot to say on the subject, and without their cooperation, the notion of iPhones on Ting is a nonstarter for now.

What if I Try Ting and Don't Like It?

Ting is apparently so confident that customers will stay with them, they've made opting out ridiculously easy, especially when compared to canceling a typical wireless contract with a big carrier. There are no penalties, salesman hassles, and the like.

If you're not happy with Ting, you simply log into your account; choose "Cancel Your Account" from the drop down menu in the upper right corner of the page; type "Cancel" in the field; and click to confirm. That's it.


Ting strikes us as a smart, hassle-free way to stay connected with your smartphone or other device and make the most of your budget. It makes sense for equipping younger family members with cell phones, for example, or transforming your small-business team into a lean, mean mobile arsenal. The big hole here is Ting's dedication to Android, which is great for Google enthusiasts but means a de facto velvet rope that shuts out iPhone users. But there's nothing here to stop an iPhone-loving user from, dare we say, switching to Android. We say go for it (especially if your iPhone contract is nearly up), and if it doesn't work out, you can easily leave the program and resell your Ting-ready phone for some cash to put towards the alleged iPhone 5.

It nothing else, Ting phones for a household suggests a catchy slogan: "The family that Tings together clings together."

Lou Carlozo is a dealnews contributing writer. He covers personal finance for Reuters Wealth, and was most recently the managing editor of WalletPop.com, and before that a veteran columnist at the Chicago Tribune.

Rawmeat
This article is waaaaaaaaaay out of date as of 4/27/13. Ting has improved dramatically. Ting has bring-your-own-phone for MANY brands and is even working on getting the iPhone. Phone handsets pay for themselves quickly. We went from a family plan (700min shared/0 text/256k data each) on a major carrier for $105 for 2 phones, down to $34 for 2 phones (500min shared/100 text shared/100k data shared). You are pretty close to paying only for what you use. You can use VOIP and text applications to cut down to really low costs. Worth your while to check it out.
April 27, 2013

classicxl2
Ting has a great program to save $25 on activation of new service with the refer a friend program use the following link to be referred as my friend and save $25 ttps://zi4a11mh.ting.com/]
July 8, 2012

at78rpm
Ting is the best thing to happen to cell phones since the disappearance of the external antenna.
June 19, 2012

at78rpm
I had the same question and now I have a happy answer.  Virgin Mobile does NOT honor any of Sprint's voice roaming agreements.  So those places you saw friends making calls with ease on a VZ phone but you were locked out of any signal on your Virgin device?  Sprint had the agreement with VZ (and ATT and AllTel and TMobile) to share roaming, but Virgin is a lying bunch of weasels that will not tell you this up front.

Ting DOES have voice roaming agreements with every one of Sprint's partners, so I can call and text everywhere I could when I had a Sprint phone.  Data is another story, though: the cost of data roaming is so high, Ting wants to wait until it can get a better price before they start offering it.  Right now, I get data (email and web) only where Sprint has data, which isn't bad.

I wholeheartedly recommend Ting.  I can use it in the mountains of northern New York on 85% of the 50 mile route that I travel, and that even beats my old Sprint Blackberry!

psychobillyman
how is there, ting's, coverage map, so much better looking than Virgin Mobile when they both use the sprint network
June 19, 2012

shiv81
Even with the idea of never paying for overages, the service is way too expensive. Republic Wireless which is in beta currently should blow this out of the water when the bugs are all fixed.
June 18, 2012

atariguy
It appears that they let you out of your contract that easy, and are able to be flexible on the plans/pricing, because they are not subsidizing the phones. So if you can afford to buy your phone upfront, rather than over time (which is essentially what you're doing - and actually overpaying - with TMobile, Sprint, and the others), it may be a good deal.
June 18, 2012

BrandonMills
Apple charges carriers ridiculous amounts to carry the iPhone and Ting can't afford it. Android is the cheapest option for all carriers. It makes sense why Ting is all Android.
June 18, 2012

Blog · Roundups · 1 day ago
Top Halloween Deals: Put Your Dog in Fancy Dress for Less!
Whether you're putting your dog in a superhero outfit, lighting up a traditional Halloween Tree, or just buying yourself a box of Kit-Kats, you can do it all from this: our roundup of the five best Halloween deals!

Blog · Buying Guides · 2 days ago
8 Things NOT to Buy on Black Friday
Not every deal is a good deal, even on the biggest sales holiday of the year. So before you start shopping, check out our suggestions for what not to buy on Black Friday in 2020.

Blog · Roundups · 6 days ago
How to Find Deals on Apple iPads
iPads come in a range of sizes and with a variety of features, and our experts here at DealNews can help you find deals on iPads that fit your budget. We'll go over the different iPad models and accessories available. Once you know what to look for, check out the iPad deals and iPad sales our experts have found.

Apply coupon code "DN20" for the best price we could find by $7. Buy Now at StackSocial

Save on a variety of clothing for babies, toddlers, and kids. Shop Now at The Children's Place

Blinds.com · 5 hrs ago
Blinds.com Holiday Head Start
up to 35% off
free shipping

Save on a variety of sale shades and blinds with coupon code "HEADSTART". Shop Now at Blinds.com