Stores are constantly developing ways to get your hooked, from dressing rooms that text selfies to your friends, to racetrack layouts that let you charge through the aisles.
BY:
LOU CARLOZO
DealNews Contributing Writer 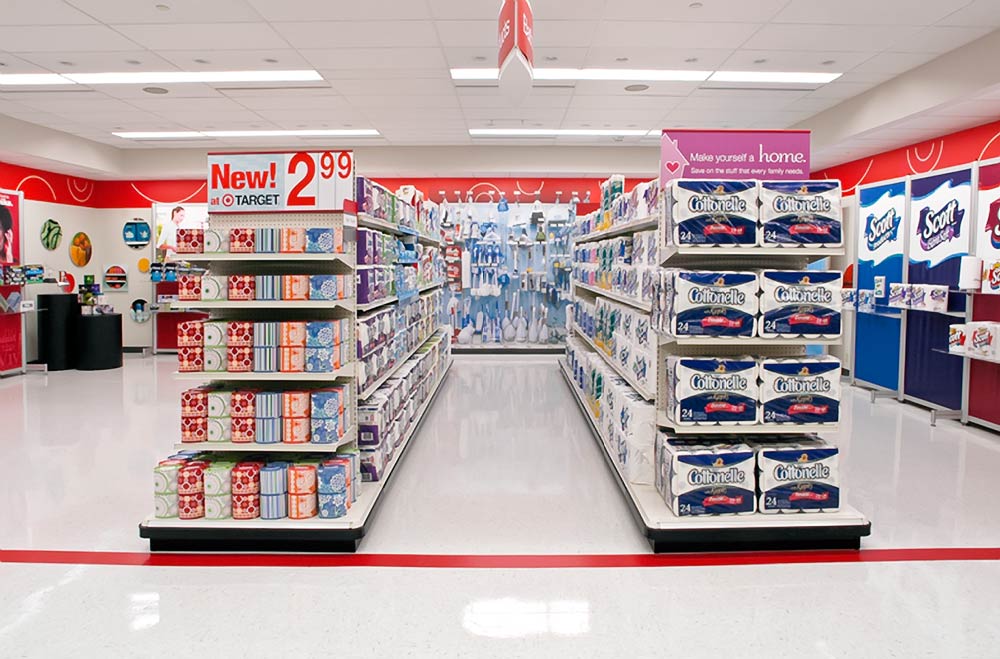 Brick-and-mortar stores have changed a great deal over the last generation, and are in the midst of morphing as we speak. In an age when the average consumer scans some 12 feet of shelf space per second, store layout has become the latest weapon for keeping customers happy and retailers profitable.

From the shape of aisles to trademarked Zen, here are some of the retail strategies that have impacted how you shop — and what's ahead as the digital shopping experience continues to grow.

Racetrack Layouts Are All the Rage

Overall, the retail spaces of a generation ago were both more crowded and less streamlined than what we're used to today. "Twenty years ago, aisles were organized zigzag so customers would constantly encounter merchandise displays," says Eugene Fram, Emeritus Professor of Marketing at the Rochester Institute of Technology's Saunders College of Business. "But with larger portions of the populations living compressed lifestyles, traffic aisles have been straightened so that customers who want to can move through the store more easily."

Target helped pioneer the streamlined flow, introduced in 1975. In fact, the Minnesota-based chain calls it the "racetrack store" layout, and it's now the go-to arrangement in more than 1,800 Target stores in the U.S. and Canada.

"The racetrack layout prevails today," Nancy Devine, Target's senior group manager of store planning and design, told the Target in-house publication "A Bullseye View" last July. "While department stores are typically laid out as a collection of shops, many of which may have distinctly different décor and may even be enclosed with walls, Target features a more open layout with broad sight lines for easy navigation." And as the name implies, "racetrack" means getting from one aisle to another faster, and finding what you need quicker.

Get Ready for Walmart Light, as Retailers Look to Downsize

Yes, retail stores have gotten larger over the years. "Currently it ranges from 26 ft. per person to 46 ft. per person," Fram says, noting that the former figure represents malls and the latter all retail space, including freestanding small units. "Compared with the early 1990s or late 1980s, the mall figure was about 16 square feet.

But especially after a lackluster holiday shopping season, U.S. retailers find themselves "dramatically overstored," Fram says. "Many retailers like Target and Walmart are experimenting with smaller units: 20,000 to 50,000 square feet. But finding the right configuration hasn't been easy for all of them, especially Walmart, which I think has been experimenting for 10 or more years."

The Machines Are Replacing Human Beings for In-Store Service

With budgets tighter and stores looking for ways to do more with less, some are now turning to interactive digital signage as part of their strategy to reach out on the customers' terms. These include, but are certainly not limited to, regular screens, video walls, and video kiosks.

"It's probably a bit too early to be administering last rites to brick-and-mortar retail outlets," says Bruce Molloy, vice president of business development at Customer Mobile in San Francisco. "The smarter retail shops are embracing the online experience and incorporating it into their store's layout. By using tablets and other interactive displays, they're actually providing the customer with a new type of sales assistance – one that's actually more compelling, passionate, up-to-date, and accurate about the product offerings than the human who's going to ring the sale up."

Chic Dressing Rooms That Will Text Selfies to Your Friends

Time was when a dressing room was simply that: a decidedly no-frills place to take your garments and try them on. But times have changed, fashion mavens. At stores such as Anthropologie, the dressing rooms are decidedly posh, as Allie Firestone describes on divinecaroline.com: "No dirty plastic doors there. The entire dressing room area, tucked into the middle of the store instead of the back, was constructed from light-colored wood. Plants and artwork adorned the walls. The soft carpet made me want to linger in front of the mirror barefoot, and the comfortable seating was perfect for pondering my various purchase choices."

Firestone maintains it's all about getting customers to buy more, and Fram agrees that dressing room chic has become a mini battleground for consumer loyalty. Some stores, he notes, have even introduced electronic dressing rooms. "This has been around for 5 to 7 years in experimental form, where when you put something on and it takes a picture of you in the clothing. Then you can send it virtually anywhere to anyone who wants to receive it via cell phone or iPad for a second opinion."

It'll only be a matter of time before someone asks, "Does this dressing room make me look fat?"

Many forecasted failure for Steve Jobs when he opened the first Apple Store in 2001. But Apple not only proved that a store dedicated to a single computer brand could succeed, they also combined many of the retail experience factors described here.

Now, the Apple Store model is widely imitated and is so distinct that it's trademarked. The description of the trademarks includes "a clear glass storefront surrounded by a paneled facade" and, within the store, the rectangular tables arranged in a line in the middle of the store parallel to the walls and extending from the storefront to the back of the store, according to the website shopperception.com. When shoppers walk into an Apple Store, they're greeted by rows and rows of MacBooks, iPads, and iPods that they can touch and try out. Nothing sits behind a glass case under lock and key.

Apple's clean, uncluttered setup owes much to the late Jobs' affection for Zen minimalism, yet it's as profitable as it is pretty. With close to 400 stores (including 150 outside the U.S.), each earns $3,017 in sales per square foot — more than any other U.S. retailer, shopperception says. That's partly due to how fast customers can pay for their goods and be on their way.

"From an interaction perspective, Apple has completely eliminated the checkout line," says Jim Carroll, a retail futurist trends and innovation expert based in Toronto. "Cash registers have disappeared, and that's a pretty significant change. It's weird when you pay them through one of these iPhone devices and just walk out — and in five years we'll see a lot more retailers doing that."

What's Ahead: Advertisements That Talk to You

In terms of the future, experts say that you can bet on mobile and digital technology playing even bigger roles in the retail shopping experience. "Ten years ago, cardboard end-cap displays were stuffed with a product at the end of an aisle," Carroll says. "Today it's all about screens everywhere. When you start to link it to smartphones, it gets very interesting. Soon we'll see customized commercials in the store: 'Hey Jim, we've got a deal for you in aisle number seven.'"

No matter how tricked out retail environments get, or how many digital devices get into the act, stores will remain spaces for men and women to explore, in real time, the possibility of the purchase. Whether you're doing that in a racetrack layout, the sleek confines of a high-end computer store, or even your local resale shop, here's hoping it makes your heart beat just a little faster.

Rawmeat
@jmagg- What? You don't think there are already cameras there? Ones the customers are not told about? They just aren't meant for customers to access (or to know about) for themselves. Anyone with me on this?
March 31, 2014

jmagg
does anyone else think cameras in dressing rooms is an idea just waiting to be abused.
March 31, 2014