7 Things You Need to Know About the New Kindle Oasis

The newest member of the Amazon Kindle family was introduced last week, and it's probably safe to say it's not what people expected.
BY:
JULIE RAMHOLD
Senior Staff Writer/Spokesperson 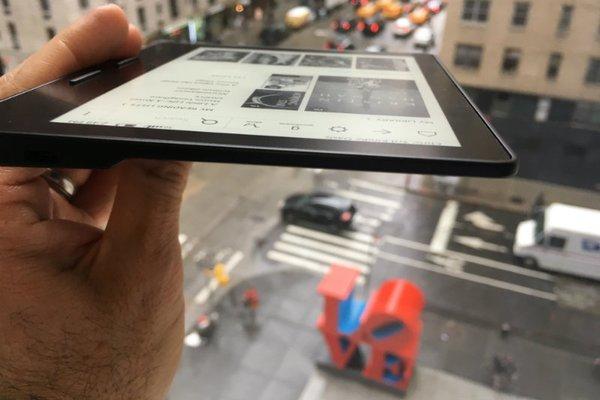 Even though speculations ran wild, the formal introduction of the Kindle Oasis last week still managed to leave a lot of people surprised. We've got the lowdown on the most important things you need to know about Amazon's newest eBook reader model, which is due to begin shipping April 27.

It's the First Kindle to Include a Case

Kindle owners are used to buying a case separately, yet the Oasis comes with one in tow. It's not just a standard case, either. It's a leather cover, available in three different colors. And in addition to protecting the Oasis, it also has a backup battery.

Together, the case and the new Kindle feel a little more like a traditional book, which is great for bibliophiles who miss that in their e-readers.

It Has a Super Long Battery Life

The Oasis on its own has a battery life of about two weeks, depending on usage and settings. The great thing about the included case is that it extends the battery life by a purported seven weeks. That's an impressive potential of nine weeks the Oasis should be able to run before needing to be charged again.

It Looks Totally Different, And the Page Turn Buttons Are Back

As Mashable pointed out, Amazon has tweaked the design of the Kindle over the years, but has kept it mostly the same overall.

But the Oasis has some major design changes. While it sports the same 6" touchscreen found on other Kindle models, it's now closer to a square shape overall. The screen isn't centered in the device, and it's only 3.4 millimeters thick. The hand grip part of the body is where elements like the CPU, storage, and battery live, and Amazon has brought back the page turn buttons for anyone who prefers not to touch the screen.

Without the cover, the WiFi-only version weighs a mere 4.6 ounces, and the WiFi-plus 3G model weighs 4.7 ounces. Even with the case, it's reported to still be incredibly light.

The Screen Rotates When You Switch Hands

The new design of the Oasis means you can switch hands differently as well. Since it has a thicker part to serve as a hand grip, it's not a matter of just moving it from one hand to the other. You actually have to rotate the device to do so. The good news is that Amazon designed the Oasis with an accelerometer, meaning when you rotate to switch hands, the screen flips much like tablet or smartphone screens do when physically rotated.

No Adaptive Light Source, But More LEDs Than Previous Models

However, instead of employing that, the Oasis uses 10 LEDs. General reviews so far seem pretty favorable for the extra LEDs, and the e-reader still has an adjustable brightness scale, which users will have to set manually.

While some of these design features are sure to be impressive to e-reader fans, others have noted the lack of more advanced options.

While Amazon has been rolling out a multitude of products lately that communicate with Alexa, the Oasis isn't one of them. It also doesn't boast extra storage than the other Kindles; just like the others, it has 4GB on-board. If users are hoping for more interactions or features akin to something on a tablet, they'll be sorely disappointed with this offering.

It seems obvious that the Kindle Oasis is a pretty e-reader. It's dedicated to — and meant for — those who really enjoy reading. But for anyone who might prefer an e-reader with more versatility, this is probably not the one for them.

Readers, what do you think? Are you interested in the Kindle Oasis, or do you think Amazon missed the mark on this one? Sound off in the comments below!

chadley25
Still very, very happy with my $100 Kindle Paperwhite. Amazon lost their collective minds with the Oasis. Really no clue what they were thinking with this thing at this price.
April 20, 2016

nimer
I have a three year old base Kindle (non-touch) and I have yet to see a reason to upgrade; I'm tempted by the higher DPI, but I don't want to give up the buttons, or have to pay $300 for eReader

The best feature of the eReader is how simple it is, it's not about the kindle; it's about the book.

Take $9 off with coupon code "35UYKSVZ". Buy Now at Amazon

Coupon code "MEMDAY15OFF" cuts it to $59 less than you'd pay for a new one and the lowest price we've seen in any condition. Buy Now at eBay

Coupon code "MEMDAY15OFF" cuts it to the best price we could find by $29. Buy Now at eBay