No, it's not the same thing as a Surface Pro 4. But the first laptop from Microsoft is a 2-in-1.
BY:
MOLLY MCLAUGHLIN
DealNews Contributing Writer 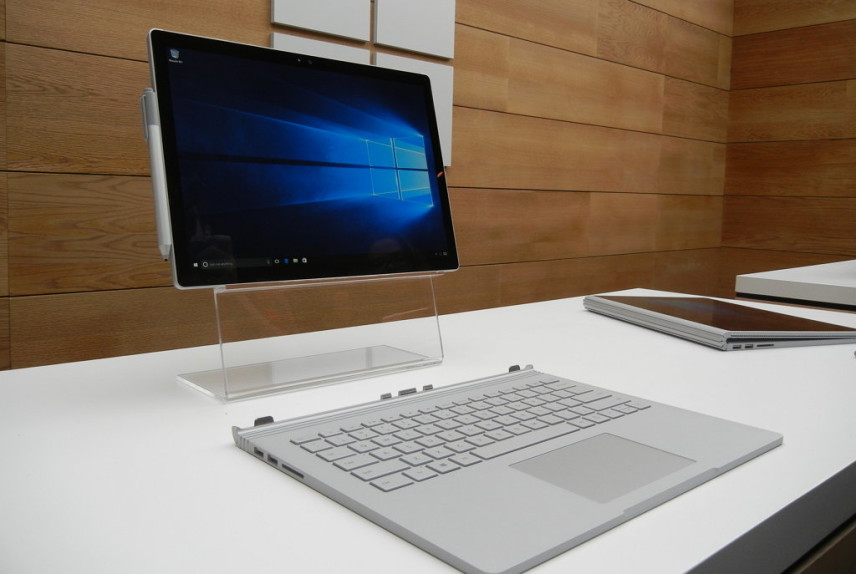 At last week's Windows 10 event in New York, Microsoft announced several new devices, including the Surface Pro 4 tablet and the Microsoft Band 2 fitness tracker. But everyone was surprised by the final product that was unveiled: the Surface Book.

At first, the Surface Book looked like just another touchscreen-enabled Windows laptop, but it was soon revealed that its display is completely detachable. And that then prompted many to wonder, how does it differ from the Surface Pro?

It's an interesting development from Microsoft, to say the very least. Here, then, are some of the most important things to know about the brand new Surface Book.

The Surface Book is the First Laptop Designed by Microsoft

While Microsoft has been in the PC business for years, it's only been on the software side, with the Windows OS and Office suite of software. In 2012, the company entered the tablet business with the Surface Pro. It will be interesting to see how this move affects companies like Acer, Asus, Dell, and Lenovo, which currently manufacture most Windows laptops.

It Comes in Five Configurations

SEE ALSO: 10 Awesome New Features in Windows 10 You Should Know

It's Different Than the Surface Pro

Moreover, in laptop mode, the Surface Book's display doesn't require a kickstand, like the Surface Pro 4 tablet does. This means it can truly sit comfortably on your lap. Microsoft refers to this as "lapability."

But It's Not Just a Laptop, Either

What surprised everyone at the unveiling is that the Surface Book's display can be used as a fully functional tablet, complete with its own power and volume buttons. You can also attach the display to the keyboard facing outward for drawing mode.

The Whole Package is Really Light

The Surface Book weighs 3.34 pounds, and the 13.5" display is 1.6 pounds. The versions that include a discrete GPU weigh a bit more. For comparison, that's only slightly more than the 13.3" MacBook Air, which weighs just under 3 pounds.

The Surface Pen has 1,024 Points of Pressure

Bundled with the Surface Book, as well as the Surface Pro 4 tablet, the Pen attaches magnetically to the side of the display. It's designed to mimic the feel of a real pen, with four interchangeable tips and an eraser. You can use the Pen to take notes, highlight, and sketch, and even summon up Cortana, Microsoft's digital assistant. The new Microsoft Edge browser also lets you write directly on webpages. The Pen uses a replaceable battery that should last for up to a year.

You'll Have to Pay Extra if You Need a Graphics Chip

For serious photo and video editing and advanced sketching software, you'll need the aforementioned discrete GPU, which adds on at least $400 to the price tag — $1,899 to $2,699, depending on other specs.

The first thing you notice about the Surface Book is its funky looking hinge; that enables the detachable display to stand up on its own at various angles. However, it also means there's a small gap between the keyboard and the display when it's closed. This might drive design-centered people a bit crazy, and it could possibly leave the computer vulnerable to damage when you're on the go.

There's a small gap between the keyboard and the display when the Surface Book is closed, which could leave the computer vulnerable to damage when you're on the go.

You Get Two Built-In Cameras

The Surface Book has a 5-megapixel front-facing camera for video chats and facial recognition, and an 8-megapixel camera with autofocus for snapshots. You can also shoot 1080p HD video.

You Can Unlock the Laptop Using Facial Recognition

Windows Hello support is built-in, so you can sign in without entering a password. This feature is also available on the Surface Pro 4, and the latest Lumia Windows 10 smartphones.

The Surface Book Doesn't Have a USB Type-C Port

USB Type-C is notable mainly because it's reversible — you no longer have to worry about which way you plug in USB devices. While there aren't any USB-C accessories on the market now, this will soon be the standard, and devices without this port will eventually require an adaptor. This small inclusion would have made the Surface Book future-proof.

The Surface Book is available for preorder now and will ship by October 26. Readers, what do you think of the Surface Book? Is it on your wish list? Let us know in the comments below.

tammytam
I love the concept, specs and design but for my budget and daily use I will have to pass. Of course being a dealnews follower. I will have to wait a year or two when their a sale or a refurbished model that's about 75% off the the first initial release price. Until then I'll have to be satisfied with my Surface pro 2 with keyboard that I bought for $400. Well if the Surfacebook is unpopular like the first Surface/Pro then we'll see deep discounts in the future.
October 15, 2015

Yeoman007
I say compare the Surface Book with the 13" MacBook Air, the MacBook, and the 13" MacBook Pro simultaneously, not just to one of them at time while going through the features list, and include prices. That would very informative.
October 15, 2015