There's Never Been a Better Time to Invest in Beanie Babies

Beanie Baby pricing has finally bottomed out, with discounts as high as 80% to 99% off — making April 1 the perfect time to invest!
BY:
GARCIA BEAR
Cub Reporter 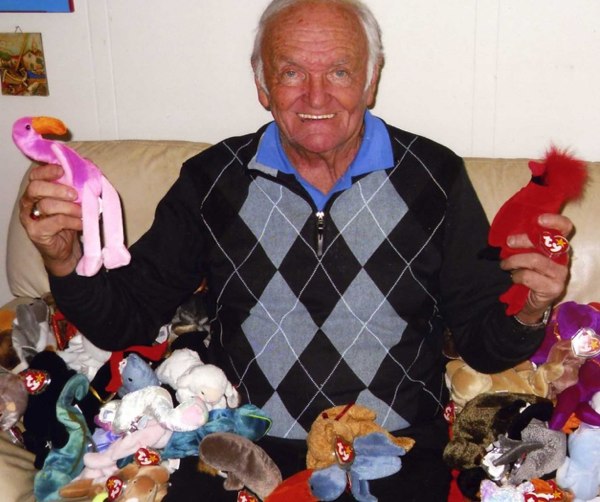 Two decades ago, Beanie Babies ushered in an era of prosperity rarely seen in the collectibles marketplace. Due to their extreme adorability and low $5 price point, kids started collecting the hell out of them. Then, adults got into the game — and things got real.

Treating them like a commodity to be traded, speculated on, and brokered, prices skyrocketed, and supporting businesses found themselves swept up in the boom. For instance, "Mary Beth's Bean Bag World" — a real magazine that really existed and that people paid money for — was selling over 650,000 copies every month. It was a crazy time in which individual, highly-sought-after Beanie Babies would sell for hundreds or even thousands of dollars.

Being adamant Beanie devotees who are definitely human, we decided to delve further into the price history of these cuddly critters. What we discovered is that, after a glorious 20 years of existence, Beanie Babies are now at historically low prices — making it the perfect time to invest! 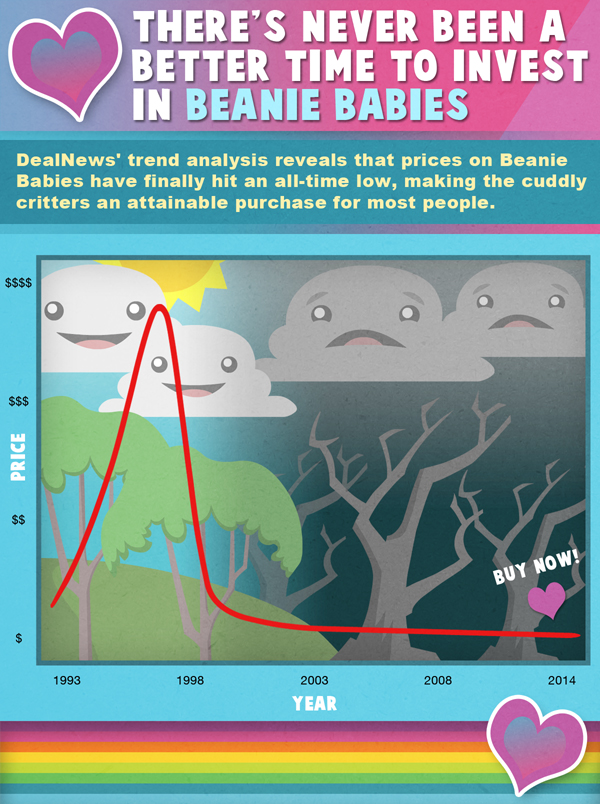 As you can see in the chart above, Beanie Baby prices have finally bottomed out. Whereas some of those highly-desirable Beanie Babies would sell for small fortunes in the 90's, you can now get many of them at 80% to 99% off their peak prices. In fact, a quick perusal of eBay showed us that many of the toys can be found for as low as 99 cents! Naturally, this means one thing to our deal-savvy ears: There's never been a better time to get into the exciting and fun world of Beanie Baby speculation!

Due to their proven collectible nature (they jumped 50 times their face value in 1998), it's all but guaranteed that Beanie Babies will, once again, increase in value. But even outside of price, there are so many reasons why April — specifically April 1st — is the best time to buy Beanie Babies.

The Holidays Are Coming

Are you willing to bet that Toys "R" Us won't name Beanie Babies as the hot toy of the 2014 holiday season? You can't be sure that they won't! At current prices, you can afford to pick up a few on eBay at bargain-basement lows. If When TRU gives them the holiday stamp of approval (as they did back in the late 90s, so there's a precedent!), you'll be the shining hero of the holidays, showering the kids in your life with the hottest toys. Or, you could mercilessly jack up the prices and re-list them on eBay and make a killing. Your kids can get other presents, with the profits.

For some reason we never seem to cover this in our Buying Guides, but April is consistently the best month to buy babies of any kind. Beanie Babies are no exception. The reasons for this, we assume, is that, according to the most recent Census report, more babies are born in September than any other month. Therefore, after seven months, everyone who already wants a baby has one, so the prices drop. Take advantage of this and scoop up some Beanies when sellers just want to dump their stock.

Small Things Are In!

Stuffed animals are great, but more and more these days, people are looking for entertainment that they can carry in their pockets. Just look at iPhone apps! They're like big, non-portable software that you can carry in your pocket via your phone. With the runaway success of Flappy Bird, Angry Birds, Tiny Wings, and other bird-based apps, Beanie Babies — which also fit into your pocket — will soon be seen as the technological successors to full-size stuffed animals. Especially those that look like birds.

Once a Beanie Baby has been retired, Ty Inc. no longer makes it. That means that every single beanie you have is like owning a '57 Chevy. True classics have no replacements! That '57 Chevy will only grow in price, so why wouldn't you expect Beanie Babies to do the same? (Once this temporary, 15-year price-lull is over, of course.)

As you can see, it's super clear that now is the best time to buy Beanie Babies. But keep in mind that, just because a couple of people got fabulously wealthy selling Beanie Babies in the 90s (mostly Ty Inc., themselves), it doesn't mean these collectibles are some get-rich-quick scheme! They are investments that you need to nurture patiently to grow. Buy a couple of beanie babies today at the low price of $1 to $5, and in 70 to 80 years, they might double in value!

Readers, what do you think about the Beanie Baby resurgence? On a scale from 1 (Really Good) to 10 (Unbelieveably Amazing), how awesome are Beanie Babies? Sound off in the comments below!


A recent addition to the DealNews team, Garcia brings his extensive eBay experience to his coverage of all things tech and Internet-related. His byline has appeared on sites such as Yahoo! Finance, MSN Money, Fox Business, and the Huffington Post. He lives in Ann Arbor, MI with his mother and 73,542 siblings.
DealNews may be compensated by companies mentioned in this article. Please note that, although prices sometimes fluctuate or expire unexpectedly, all products and deals mentioned in this feature were available at the lowest total price we could find at the time of publication (unless otherwise specified).

Scroogus Maximus
Remember, although some Beanie prices may go up, others may go down!

This applies mostly Jake the Mallard & Banjo the Dog, who are frequently used with skeet shooting machines in Duck Hunt live simulations. For some reason, Banjo inevitably has more bullet holes, but that's what happens when the insufferable mutt laughs whenever I miss the duck.

wlau89
I'm in for a few hundreds. TY DealNews for the insight! I will make tons of money selling them on eBay and Amazon! YES!
April 1, 2014

GLVegas
Garcia is a hack. He still tries to pay for his auction wins with Billpoint.
April 1, 2014