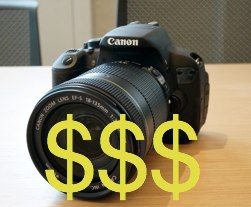 It's barely been a week since Canon announced its new digital SLR, the Canon EOS Rebel T5i, and already the verdict is fairly unanimous: the T5i is essentially the same as its predecessor, the T4i.

According to CNET, the only major difference between both models is the price and kit lens options. Otherwise, the few minor updated features you'll find on the T5i include creative filters with real-time viewing on the LCD, an improved mode dial that rotates 360 degrees, movie digital zoom, and a different exterior texture and finish, reports Digital Trends.

Aside from those aforementioned features, the T5i is extremely similar to the older T4i — but the price difference between the two is significant. The T5i will debut next month with a basic 18-55mm kit lens for $899.99. Meanwhile, the equivalent T4i kit recently sold at an all-time low price of $560 in the middle of March. Thus, with no major enhancements, is it even worth purchasing the new T5i? For the average consumer looking to save money, the answer is no.

The equivalent T4i lens bundle, meanwhile, was quicker to receive significant discounts; it debuted for $949.99 and saw a $200 price drop (a 21% discount) just three months after its release. Thus, based on our deal data, we predict that the T5i won't see any major discounts until at least three months into its lifespan.

In the meantime, deals on the T4i will likely reappear at that all-time low price of $560, especially once the new Rebel hits stores. (Currently the best price we could find is $595 with free shipping.) By sticking with the T4i and waiting for a deal, you'll pay at least $340, or 38%, less than you would for the T5i. Moreover, as time progresses, the T4i will fall even further in price: a month after the T5i debuts, the T4i could drop another 5% to about $530. Just keep in mind that Canon plans on discontinuing the T4i once current inventory runs out. The T3i and T3, however, will remain in production as entry-level models. 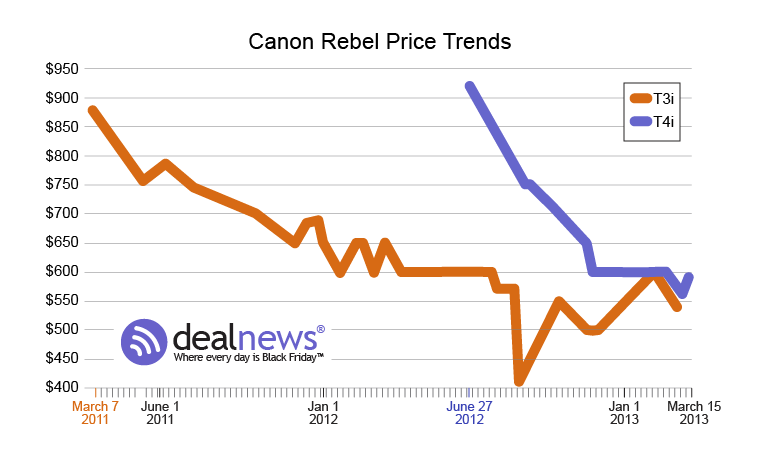 Nevertheless, if you must have the T5i, we advise waiting at least three months before making a purchase. And based on the T4i's deal history, if you wait even longer, say until September, the T5i will see cuts that take about 37% off its retail price.

Regardless of which model you decide to purchase, be sure to keep an eye on Canon DSLR deals by setting up an email alert. Or check out any camera deals that are available now.

RKStClair
Please correct the headline. The camera Canon announced is the T5. The T5 is either a dressed up T3 or a slightly dressed down T3i. The T5i is a completely different camera.
February 20, 2014

archielee
to answer the question is the t4i worth the higher price vs the t3i - it all depends upon what you are looking for. If this is your first digital SLR camera purchase and you're just getting into SLR photography and not just using the camera in point and shoot mode but learning about setting aperture, shutter speed, ISO, etc., then you're probably better off going with the t3i to save the money. (you can use the money to buy a second lens) Till you learn to fully utilize many of the features of a SLR camera, I'd suggest the T3i. By the time you're more into photography, there will probably be a newer model (T6i or T7i) and you can buy the new camera body and use your existing lens with it. Google: canon t4i vs t3i and find numerous articles that will discuss the differences. Note: the T4i doe have an improved auto-focusing system which will help if you are taking a lot of action photos (sports photography) where the point of focus is not necessary in the center of the frame.
April 19, 2013

lem3
Waiting for the T4i to drop in price has its risks. Both cnet and dpreview indicate the T4i has been discontinued in the Canon lineup, replaced by the T5i. The T3i remains.
March 28, 2013

rockychocbill
Good report Louis.
@JosephMay77, initial reports are indicating it's the same sensor with the same focusing system as on the T4i. If anyone is looking to video more than just the occasional dance recital with a Rebel level camera then they should have a T3i with Magic Lantern firmware on it.
March 28, 2013

JosephMay77
As a T3i owner, if the T5i really has an improved live-view autofocus system, it will be worth the money for anybody who shoots video.
March 28, 2013

lsapinoso
Good news for those looking to upgrade to a T4i, it will eventually be put on clearance as well, I would think, just like how the Sigma 30mm f1.4 went on clearance when the ART version came out.
March 28, 2013

VIEW ALL
Blog · Roundups · 7 hrs ago
The Best Shoe Deals
The experts within Castle DealNews love nothing more than a strong discount on the biggest shoe brands, so keep your eyes affixed here for the best deals on Nike, adidas, New Balance, Birkenstock, and more.
Blog · Marketplace · 11 hrs ago
6 Ways Sellers Can Increase Their Amazon Back to School Sales
The 2021 Back to School season has the potential to be quite lucrative for sellers. Check out our top tips for increasing Back to School sales on Amazon this year.
Blog · Morning Jolt · 12 hrs ago
5 Deals You Need to Know Today: Buy 1 Power Tool, Get 1 Free at Lowe's
Lowe's leads today's lineup with two power tools for the price of one. Check out this offer and more in our roundup of the five best deals we found over the last 24 hours.
Blog · Roundups · 1 day ago
The Best Video Game Deals
The best of the best when it comes to video game deals, cheap consoles, and discounted accessories are gathered here, in one convenient roundup.
Blog · Buying Guides · 1 day ago
The 11 Best School Supplies to Buy at Target in 2021
Back to School season can be stressful for parents and kids, but Target can make it easier. Check out our guide on the best school supplies to buy at Target, some of which are just $1 each!

It's $57 under what you'd pay for this quantity at Staples. Buy Now at Amazon

That's the best price we could find by $7. Buy Now at Overstock.com

It's $50 under list and the best price we could find. Buy Now at Office Depot and OfficeMax

Apply coupon code "EXTRAFIVE" to get this deal. That's $93 off and the lowest price we could find. Buy Now at Lenovo