The Dollar Store Is Kicking JCPenney Out of Your Local Mall

Department stores in malls are dying, but discount retailers are booming — and filling some of the empty spaces.
BY:
ANGELA COLLEY
DealNews Contributing Writer 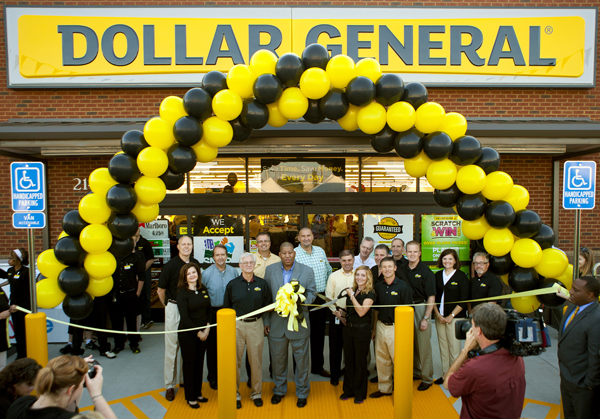 The days of upscale shopping centers, stuffed with department stores, is a thing of the past. Now, due to the rise of online retailers and an economy slowed by the Great Recession, both department stores and traditional malls are disappearing — while bargain stores fill the empty space left behind.

Decline of Department Stores and Malls

The economy hasn't been kind to big name retailers. The once-mighty JCPenney is expected to close 33 locations this year, while Sears will close about 500 Sears and Kmart shops, according to CNN Money. To its credit, Macy's only plans to close five stores this year.

Shopping malls are feeling the pinch too. With less consumer spending, a slowdown at department stores (many of which "anchored" malls), and the rise of Internet shopping, malls are watching the stores that remain instead leave for open air shopping centers with lower costs and less space, according to CNBC. In fact, the last indoor mall to open was in 2012, but it was hardly traditional. The $1.5 billion construction in Salt Lake City boasted waterfalls and a retractable glass roof, according to the Huffington Post. A traditional mall hasn't opened in America since 2009.

Their loss is the bargain stores' gain. Bargain chains have been gaining steam since the recession, as many people seek cheaper alternatives at places like Kohl's or T.J. Maxx. So as some mall staples are exiting the building, cheaper stores are taking over their physical spaces.

The biggest winner? Dollar stores. According to Reuters, stores like Dollar General (10,5557 locations) have been opening shops at a steady clip, with the top five dollar store chains set to open over 2,000 locations around the country.

And that means a silver lining for malls and shopping centers. The Reuters article adds that even with "retail construction at historically low levels," chains like "Costco Wholesale Corp, T.J. Maxx, Marshalls, Dollar General, Nordstom Rack and Ross Stores have been quick to fill vacancies." This has caused vacancy rates in shopping centers to fall from 9.5% in 2012 to 8.6% at the end of 2013.

Readers, do you prefer a bargain store like Dollar General to anchor your local mall? Do you find it sad that the traditional department stores are getting the boot?

Ela1969
Yes, I am sad. My mom and entire family and friends are sad that the beautifully-maintained department stores are closing and trashy stores take their place, and we'd like to see the companies forced to close down become great again. These low price stores encourages quantity over quality, and regular folks have a tendency to just shop no matter what, and whether they need the product (s). I bet you a shopper leaves the same amount of money in a low-cost store than in a nice dept store and the only difference is that he/she buys things that are not really needed from the $1 store, or Ross, etc whereas, if she bought at the department store that person would have only gotten the things that she/he needed to get. SPEND WISELY ON QUALITY, FOLKS, NOT VOLUME!
May 18, 2016

gmfco311
They need more stores like the 99 cent store they have in the West coast to branch out more.

The so called dollar stores are not a dollar like you would think. They have Wal-Mart like prices, although cheap are hardly anything close to a dollar.

kyungone
I don't feel sad toward store itself and their top paid chiefs but I feel sad about their employees who will be heavily impacted by these stores closing down.
March 27, 2014

VIEW ALL
Blog · Morning Jolt · 13 hrs ago
5 Deals You Need to Know Today: A Black Friday-Beating Sale at Under Armour
Six days later, Under Armour has chosen pure chaos by offering an extra 30% off in a Black Friday-beating sale. Check out this offer and more in our roundup of the five best deals we found over the last 24 hours.
Blog · Buying Guides · 2 days ago
What Is Green Monday? Don't Miss the Green Monday Sales in 2022
Black Friday and Cyber Monday have come and gone, but it isn't too late to find good deals on your holiday gifts! Check out what to expect from Green Monday 2022, including when it happens this year and the discounts we'll likely see.
Blog · Buying Guides · 3 days ago
The 8 Best Things to Buy in December (Including After Christmas Deals!)
Even with a longer sales season, Black Friday is still the biggest shopping occasion of the year for many. But the deals don't end after that day or Cyber Monday. Check out the best buys of December, as well as the items to wait on.

It's a buck less than you'd pay at other stores. Buy Now at Amazon

New subscribers can get two months free. That's a savings of $14. Shop Now at Groupon