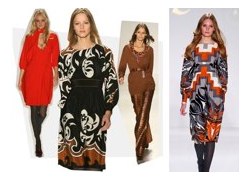 Avid stylenotes readers may recognize the brand name Tibi, since we're constantly swooning over apparel and accessories from the Amy Smilovic-designed label. From the vivid colors to the unique prints, we love everything Tibi has to offer. Smilovic credits diverse influences for her designs, and though they may not be immediately tangible, the sum of these influences results in a collection that has a resort and wanderlust air about it. It's not surprising considering she grew up on St Simons Island, Georgia, and (according to her web site) finds inspiration in "the beaches of Bali, forests of New Zealand, and Mediterranean landscape of Capri."

Smilovic started the Tibi label -- named after her original partner's fashionable grandmother -- after moving to Hong Kong in 1997, and originally all her fabrics were from Indonesia. She used the batik process that is characteristic of Muslim Indonesia, but in order to give the fabrics a personal touch, she produced them in her bright color palette. Smilovic now personally designs all the textiles for Tibi, which continue to be infused with the aesthetic ideology of the clean, batik prints. For her fall 2008 collection, for example, Smilovic mixed geometric patterns with amorphous prints, all in rich brown, orange, and red, which then transitioned into cream, gray, and purplish fuchsia. 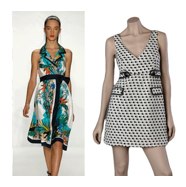 The resulting clothing looks somewhat like the uniform for a genuine jet-setter -- that is, a girl who's not just an international partyhopper, but is instead someone whose lifestyle is to constantly travel to wonderful locales (much like Smilovic herself). The pieces are timeless in terms of construction, yet feel fresh because of the modern colors and original prints. This Beehive Dress ($319, Active Endeavors), for example, is more than just the simple shift dress it appears to be upon first glance; the woven pattern makes it extraordinarily rich and contemporary. Similarly, the Tibi Safari Printed Halter Wrap Dress ($264.60, Bloomingdale's) is a classic shirtdress, but the vivid, animal jungle print makes it completely out of this world (a stylenotes staffer owns a skirt in this wild print and can attest to how cute it is). We ultimately love the clothing and how it easily fits into a normal girl's wardrobe. In fact, Smilovic has even described a Tibi girl as someone who also shops at H&M. You gotta love a designer who still pushes the cheap-chic wares!

Tibi pieces frequently retail for $200-$400, but we're always on the lookout for the brand while scouting online sales. For example, we found this Sahara Short Sleeve Dress for $169 (was $338) at RevolveClothing.com, and this Black and White Cotton Dress for $180 (was $360) at eDressMe.com. The brand is also carried at Saks Fifth Avenue, Neiman Marcus, Nordstrom, and Shopbop.com, and in 2006, Tibi opened its first exclusive retail location in Soho, New York.

Be sure to keep checking stylenotes for Tibi updates and deals!

It's the best price we could find by $10. This lets you make video calls from your TV using services like Zoom and WhatsApp. Buy Now at eBay