Devices and appliances left plugged in are still consuming power, and, thanks to the digital revolution, the problem is getting even worse.
BY:
LOU CARLOZO
DealNews Contributing Writer 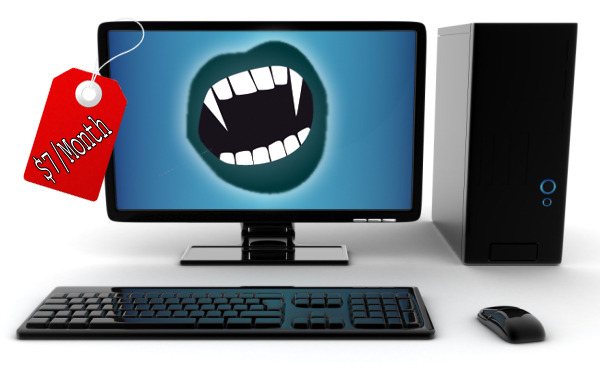 It's a fact most of us know (and many of us ignore): The devices we leave plugged in can siphon energy from our wall plugs, and money from our wallets. It's known as "vampire power," and even extends to laptop and smartphone adapters that don't have any gear connected to them. Previous studies have shown that vampire power accounts for 5% of energy use in the U.S.

But are those numbers accurate? Now comes a new study by the Natural Resources Defense Council, and its findings are shocking, if you will: Approximately $19 billion worth of electricity is devoured annually by U.S. household electronics, appliances, and other equipment consumers are not actively using. That's equal to the output of 50 large power plants.

Assuming an annual electric bill of $1,200, the old estimates assumed that you'd waste a maximum of about $60 a year by way of vampire power. But the new NRDC figures revise those estimates for a more digitally connected era.

SEE ALSO: 10 Costly Ways We Fail at Being Green (And What You Can Do About It)

According to the "Home Idle Load" report (released in early May), the annual cost for this energy drain ranges from an average of $165 per U.S. household to as high as $440 under some utilities' top-tier rates. Ouch.

Invasion of the Appliance Snatchers

If you believe that unplugging your iPhone adapters and running your laptop on batteries will drive a stake through all this, think twice. Now, everything is electronic.

"Previously purely mechanical devices have gone digital: Appliances like washers, dryers, and fridges now have displays, electronic controls, and increasing Internet connectivity," says Pierre Delforge, the report's author and NRDC's director of high tech sector energy efficiency. We know what you're thinking: Use that WiFi on your fancy fridge to look up "energy savings."

So if there are more connected devices to deal with, which ones might hog those watts the most? The NRDC list is comprehensive. You could start by going around your home and looking at gaming consoles, TVs, computers, and printers. Right there, you're staring down 51% of your vampire, NRDC statistics show.

Less obvious culprits run the gamut from garage door openers to electric fishponds(!). It also depends on which brand of device you use. Though this might take some research on your part, printers, for example, could draw anywhere from 2 to 26 watts per home. Now go ahead: Print out your electric bill and try not to shriek.

Want to start fighting back against vampire power? The NRDC recommends a number of effective ways in its Home Idle Load Action Guide. To begin with, you're in good shape to measure that idle load if your home has a smart electric meter. With it, you can use the free Green Button app at UnplugStuff.com to find your home's idle load in watts. (This tool also supports homes with solar panels.)

Look at your gaming consoles, TVs, computers, and printers; right there, you're staring down 51% of your vampire.

But even if your meter belongs to the post-horse-and-buggy era, the action guide still lists some effective options. To start with, look for old second (or even first) refrigerators in the home, and either remove or replace them; these rank among the biggest energy stealers of all.

The Naked Truth About Power Strips

Power strips from stores like Newegg will also help you in the battle against idle loads. There are two kinds: Standard multi-outlet strips can be switched on and off manually. But hey, if you've got 14 power strips, you might waste energy of another kind trying to keep up with them all. So better yet, use an advanced power strip that automatically turns off the TV, soundbar, and other devices when no one is using them.

Putting It All Together: Taking Back the Losses

Especially when we're ensconced in our digital cocoons, it's hard to think about how our behavior effects others. But the NRDC provides one statistic that's worth a pause, and worth our time to mull over: The Idle Load Effect now accounts for 23%, on average, of the electricity consumed in California homes. On the one hand, that large slice reflects an overall improvement in energy conservation in the Golden State. But just think: How much could that conservation improve if Californians got tough on the vampire empire?

At present, vampire power uses enough energy that if we cut it to the lowest quarter of participants in the NRDC study, we'd save power equivalent to the total consumption in Arizona and Alabama combined. Carbon pollution would be cut by 44 million metric tons. And it wouldn't even take a million cloves of garlic or 100,000 stakes to kill this vampire — just some smart, money-saving action around the home.

Anthony S Jennings
I don't have enough outlets to keep everything plugged in that I want to have plugged in. So I guess I'm saving energy simply by living in an apartment built before I was born. :-)
June 2, 2015

Lindsay Sakraida (DealNews)
@Dan4 Regarding fridges, that's a fair point in that fridges can never NOT be on and actually function. However, the reason why they were mentioned with "vampires" is along the lines of everything being digitized, which adds an additional 'always on' component that previously had not been a factor.
June 2, 2015

Dan4
This report is dishonest and misleading in an effort to grab headlines. To call a refrigerator "vampire" drain is misleading because this lumps a high-energy appliance in with devices that use power when you think they're off. And $165 a year average? At the national average of 10.45 cents per kWhr, that's 180 watts of vampire power 24/7/365. People are unplugging wall warts instead of addressing the real energy hogs: poor insulation and old appliances.
June 2, 2015

whgarner
This is mostly important during warm weather, in cold weather the vampires generate heat that supplement the hvac unit, therefore costs would less than estimate esp in northern climates.
June 1, 2015

Ricochet-Rabbit
A Kill-A-Watt device is a real eye opener. My living room home theater setup draws nearly 40 watts with everything turned "off".
My other system in the rec-room is a bit over 30 watts.
My Android based Logitech Revues and FTA satellite box were the biggest culprits.
I now have remote controlled power switches which kills everything. The remote switches consume power but it's a fraction of a watt.

It's back down to its best-ever price. Buy Now at Amazon

It's the best price we've seen and you'd pay a grand more for it new elsewhere. Buy Now at eBay