It's been almost two years since Roku refreshed its set-top box; in fact, the Roku 2 did its job so well that people weren't really anticipating an upgrade. Yet, a few days ago, Roku announced the Roku 3 for $99.99. Even though Walt Mossberg of the Wall Street Journal opines that this new device is "not revolutionary," but "more evolutionary," there certainly are a number of minor improvements that, overall, lead to a better user experience.

Do such minor updates turn the Roku 3 into the only streaming device you'll ever need? Should you choose the Roku 3 over the Apple TV? Is it worth the upgrade from your current Roku box? Let's take a look at what respectable news sources are saying about the Roku 3 to find out! 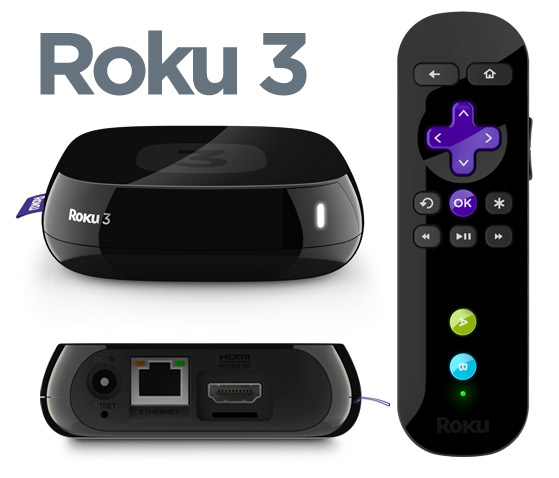 At 3.5" wide and 1" high, the Roku's footprint is the same as the previous generation, but its case is rounder — making it look like a Roku that ate one too many movies. The most notable new feature on the box itself is the inclusion of a USB 3.0 port, which is located on the side of the device, an ideal place if you're going to be plugging in flash drives.

Yet the hardware feature that reviewers can't seem to get enough of is the new remote. It's been upgraded to feature WiFi Direct, which means that it'll work through walls, potentially leading to all kinds of high jinks. The Verge's favorite feature, and what CNET calls "nifty" is the on-remote headphone port. You can plug in a pair of earphones, and instantly the TV mutes and the sound is piped through the headset.

Other hardware modifications of note include the disappearance of composite video outs. The Roku 3 can only be connected to an HDTV via HDMI. Along those lines, they've also dropped support for 480i streaming; the new device will output only 480p, 720p, and 1080p. Finally, the CPU has been bumped up to a dual-core chip resulting in "menus and videos [that] load faster than on the Apple TV, and much faster than any previous Roku," according to The Verge. The general consensus is that this change has resulted in a more snappy overall experience.

According to Laptop Mag, Roku "has given its UI a major makeover, making it simple to find the movie, show, or even actor you're looking for." Not only has the company cleaned up the Roku home page, so that there are fewer clicks required to get to where you want to go, but there's now a universal search function. In other words, a search for "The Office" will display episodes available on Hulu, Amazon, Vudu, and any other installed channel. Searching for an actor will turn up every available movie and TV show s/he's been in, and the cost of renting or buying them.

Most of the Roku 3 reviews agree with the Wall Street Journal's perspective that only two things are missing from the Roku 3: YouTube and wireless streaming from mobile devices. There's an app for Roku that lets users push pictures and music to the device from a handset, but it's the lack of a true AirPlay competitor that irks most reviewers. However, pundits do qualify the lack of Apple TV AirPlay functionality by noting that it's only a drawback for folks who are a part of the Apple universe. As The Verge puts it, "The good news is that if you're not an Apple user or don't have much need for AirPlay, you only need one box — and that box is the ... Roku 3." But if you're a Mac user, as CNET so bluntly puts it: "The Apple TV still works better within the Apple ecosystem."

However, Laptop Mag points out that the "Roku offers a lot of channels that Apple doesn't have, including Amazon Instant Video, Facebook, NBC and Fox News, Pandora and Spotify, plus hundreds of other channels in various subject areas." It's up to the consumer to decide if such offerings are more important than the ability to AirPlay a movie from a laptop to the TV.

Is it Worth the Money?

Despite the lack of AirPlay or an AirPlay-like service, everyone seems to agree that the Roku 3 is a device worthy of your dollars. The Wall Street Journal calls it "an improvement that enhances the experience of what was already a good product;" CNET raves that "the Roku 3 is the best streaming-video box yet," giving it an Editors' Choice rating; and The Verge says that "it's the best, most versatile, and most usable set-top box on the market, and buying it is a no-brainer." The only caveat, as Laptop Mag cautions, is "if you currently own a Roku box, there isn't much incentive to upgrade, as the updated software is coming to all current-generation Roku devices in April."

Eager to give the Roku 3 a try? Set up an email alert now to receive notification as soon as we list a deal.

fostina1
you can stream anything to your roku with the app "plex". you can add any video from the net to your plex media server from any computer using a plex extension. and it is dead simple to set up. by far the best money you will ever spend for your home entertainment needs.
March 19, 2013

monkeyrotica
@briantho Because most people would rather just watch tv than build a computer from scratch.
March 15, 2013

arosemena
Yes, jared-linder, there will be an software update for the older Roku boxes. Plan on getting it during the month of April. What you will not get is the new remote with the earphones. To me that was the feature that got me to order the new Roku 3. I received it from Amazon today and I am so happy to have invested $99 and not wait for a "deal".
March 15, 2013

nshearer1
Come May the new UI will be launched on the rest of the Roku line. Also Plex is a great service I use on the Roku to stream movies and TV shows to the Roku.
March 14, 2013

jared_linder
Will there be updates for those of us who already have a Roku device?
March 14, 2013

VIEW ALL
Blog · Roundups · 6 hrs ago
The Best Video Game Deals
The best of the best when it comes to video game deals, cheap consoles, and discounted accessories are gathered here, in one convenient roundup.
Blog · Morning Jolt · 10 hrs ago
5 Deals You Need to Know Today: A Parade of Macy's Discounts
Can you afford to not learn about the grievous injuries Sonic the Hedgehog has caused at Macy's Thanksgiving Day parades? Our discussion around the Macy's clearance sale will reveal all. Check out this offer and more in our roundup of the five best deals we found over the last 24 hours.
Blog · Roundups · 1 day ago
The Best Men's Clothing & Accessories Deals
From adidas to Uniqlo and Allen Edmonds to Wilsons Leather, this is your guide to the best men's clearance sales, designer clothes deals, and everything discounted in the world of men's clothing.
Blog · Roundups · 4 days ago
The Best Smart Home Deals
Whether it's a smart assistant, a security hub, a smart lighting setup, or one of the many other home automations on offer, these are our picks for the best smart home deals available right now.
Blog · Roundups · 4 days ago
The Best Patio Furniture Deals
From dining sets to fire pits to clearance sales, let the experts at DealNews guide you to the best discount patio furniture available today.

Apply code "GAMES" for a savings of $7, making it the lowest price we could find. Buy Now at Skechers

That's around $24 less than you'd pay for a new one. Buy Now at Baratza