Going to the movies isn't as cheap as it used to be. Fortunately, a new wave of set top boxes can bring the cineplex straight to your living room. From Roku's Netflix Player to Vudu's 1080p-capable BX100, we tested today's most popular movie streamers to find out which on-demand box can save you the most time and money.

Our take: Netflix subscribers who can no longer wait for their DVDs to arrive in the mail have a new alternative. Roku's Netflix Player is a paperback-sized box that hooks up to your TV and lets you stream movies from Netflix's Watch Instantly catalog. Setup is hassle-free and the player's on-screen menu is intuitive enough that even our parents could use it. The player also comes with built-in Wi-Fi (802.11g).

From a design perspective, the Roku Netflix Player isn't the most attractive box we reviewed, but it's small enough that it won't take up much space in your entertainment center. The box sports all the connections you need to get started including Ethernet, component, composite, and HDMI. After connecting the player to your TV, the installation wizard guides you through the rest of the setup process. Here, you can choose between a wired or wireless connection. (Your network password is entered using your Roku remote and a virtual onscreen keyboard.) Next, you're given a password which you must enter manually into your Netflix account. This requires signing in via your computer. Once a connection is established between the Roku player and your online Netflix account, you're ready to begin streaming movies. (You'll need to subscribe to one of Netflix's "unlimited streaming plans" if you haven't already. Plans start at $8.99/mo.)

Before streaming your first movie, you must log on to your Netflix account via your computer and add movies to your "Instant" queue. This can be burdensome if your computer is stashed away in another room, but it's a required step in the movie-streaming process. Fortunately, you can add multiple titles to your "Instant" queue so it's always filled with titles. We also liked that seconds after you add a Watch Instantly movie to your "Instant" queue, the movie's cover art appears on your TV screen. Clicking on it with the Roku remote begins the streaming process. Over Wi-Fi, a standard 2-hour movie takes roughly 30 seconds to begin buffering. Video quality is good, but don't expect to be wowed by anything you see. Playback controls are located on the Roku remote, which is small and stubby, but easy to use thanks to its simple layout. Unfortunately, movies don't include any bonus content, so alternate endings, deleted scenes, and director commentary are out. Furthermore, skipping through chapters during a movie is an awkward process. Rather than choose numbered scenes like you would on a DVD, the Roku player relies on a series of thumbnail screenshots to rewind and forward your way through films. The process isn't very intuitive and it makes finding specific scenes a hassle. 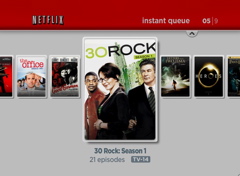 However, our main gripe with the Roku player is not so much with Roku, but with Netflix. Roku has done a good job with the box and its price, but Netflix's "Watch Instantly" catalog lacks sufficient content. At the time of this writing, the catalog holds an impressive TV roster, but blockbusters such as Iron Man and Dark Knight were not available for streaming. Instead, "New Arrivals" included The Fugitive, Ernest Scared Stupid, and Jackass 2.5. Recently, Roku released a firmware upgrade that adds support for streaming HD content. After three attempts, our Roku player recognized the download and updated itself. At the time of this writing, Netflix offers 171 streamable HD movies. Unfortunately, the list doesn't contain many blockbusters. Pan's Labyrinth, Dumb & Dumber, and Ace Ventura were a few of the more popular titles. TV fans, however, can find seasons of Heroes, The Office, and 30 Rock available for streaming. Quality-wise, we weren't impressed by the HD movies. They looked slightly better than standard definition movies, but were far from matching Hulu's quality. We watched Pan's Labyrinth and Tony Bennett: The Music Never Ends in HD and noticed some picture improvements, but overall weren't impressed. There were still noticeable amounts of pixelation and noise in our movies. (Update: Tony Bennett: The Music Never Ends is no longer available in HD.) Nevertheless, at $8.99/month for unlimited streaming, the Roku Netflix player is by far the cheapest way to bring movies into your home.

Of note, if you own an Xbox 360 or select Blu-ray players (like the LG BD300 and Samsung BD-P2550), you can bypass the $99 Roku box and stream movies directly from your device.

Verdict: Though we lament its movie selection, Netflix's tiny player is the most economical way to bring home movies to your living room.

DealNews may be compensated by companies mentioned in this article. Please note that, although prices sometimes fluctuate or expire unexpectedly, all products and deals mentioned in this feature were available at the lowest total price we could find at the time of publication (unless otherwise specified).
〈 PREV   1   2   3   4   NEXT 〉

VIEW ALL
Blog · Buying Guides · 7 mins ago
Black Friday Phone Deals 2021: What iPhone and Samsung Galaxy Offers Can You Expect?
November is the one time of year when you can expect to find a great deal on a smartphone. Check out our guide to Black Friday smartphone deals, and see what discounts you should look for in 2021.
Blog · Morning Jolt · 1 hr ago
5 Deals You Need to Know Today: Preorder the New iPad and Save $30
It's not even out yet but you can save $30 on the new 10.2" iPad. Check out this offer and more in our roundup of the five best deals we found over the last 24 hours.
Blog · Roundups · 2 hrs ago
The Best Video Game Deals
The best of the best when it comes to video game deals, cheap consoles, and discounted accessories are gathered here, in one convenient roundup.
Blog · Roundups · 1 day ago
The Best Men's Clothing & Accessories Deals
From adidas to Uniqlo and Allen Edmonds to Wilsons Leather, this is your guide to the best men's clearance sales, designer clothes deals, and everything discounted in the world of men's clothing.
Blog · Roundups · 4 days ago
The Best Patio Furniture Deals
From dining sets to fire pits to clearance sales, let the experts at DealNews guide you to the best discount patio furniture available today.

You'd pay around $3 more for a similar pair elsewhere. Buy Now at Staples

Clip the on-page coupon and checkout with Subscribe & Save to get it for half the price Target charges at a $2 low. Buy Now at Amazon

That's the best deal we've seen for this collection, and the lowest price we could find now by $30. Buy Now at Vudu