Even if you don't plan to visit Ireland, it's worth your while to fly into this hub.
BY:
PAULA BRADLEY
DealNews Contributing Writer 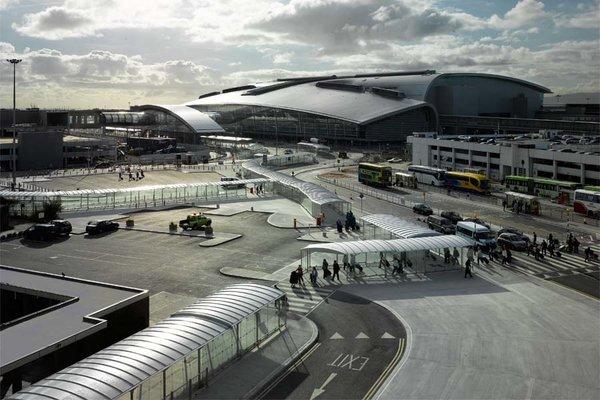 Planning a trip to Europe is exciting, but can be filled with confusion over currency, language, and transportation. Switzerland is in the middle of Europe, but doesn't use the euro. How many airports does London have, and are any of them near London? Barcelona is in Spain, but they speak Catalan — what's up with that?

However, there is one way to reduce the complications and stress of traveling to Europe. Dublin Airport, Ireland's main airport in the country's capital city, boasts several great advantages as your point of arrival in Europe. Even if you don't plan to visit Ireland, it may still be worth your while to fly into Dublin before taking a short-haul flight on to your preferred city of choice.

Direct Flights to Dublin are the Cheapest in Europe

Here at DealNews, we observe trends in pricing patterns for flights. We've noticed that when we list airfare sales, Dublin is consistently the lowest-priced destination. In June we saw an all-time low for flights to Europe, courtesy of United Airlines. The lowest-priced route in this Editors' Choice sale was roundtrip flights from Newark, NJ, (EWR) to Dublin, Ireland, (DUB) for $443.76.

Nineteen countries in Europe use the euro, and Ireland is one of them. Most of the main tourist destinations in Europe (like Italy, Spain, France, and Germany) also use the euro — the notable exception being the UK. This means you only need to exchange your US dollars into one currency when traveling, saving you on conversion fees.

SEE ALSO: Will the Brexit Vote Affect the Cost of European Travel? 4 Things You Need to Know

Ireland is the main English-speaking country in the Eurozone (the only other being Malta). Although Ireland is officially a dual-language country, the native language of most Irish people is English. Besides street signs being bilingual (showing English below and Irish above), tourists will have no problem communicating with the average man on the street.

Of course, flexing your linguistic muscles and getting directions in a foreign language can be extremely satisfying, but let's face it: No one has the energy after a transatlantic flight. We recommend keeping it simple by starting your trip in Dublin.

It's Cheap and Easy to Book an Onward Short Haul Flight

Ireland is an island, and as such, short haul flights are the main form of transportation to Europe. Dublin is the tenth busiest airport in Europe and several low-cost airlines offer flights to mainland Europe from as low as $15. Low-cost airlines to keep an eye on are Aer Lingus and RyanAir, which fly to a variety of destinations like London, Paris, Barcelona, Berlin, Rome, and more. Major airlines like British Airways and KLM Royal Dutch Airlines also fly short haul from Dublin, if you prefer to avoid low-cost airlines.

A word of caution when it comes to booking an onward flight with a low-cost airline: Most have strict baggage-weight and size restrictions, and penalties for being in excess can be severe. Make sure you'll be able to comply with the restrictions before booking your flight.

Dublin Airport opened its gates in 1972 and remained pretty much unchanged until 2010, when the airport added its $700 million expansion, Terminal 2. The sleek new terminal is now responsible for all U.S. flights arriving and departing from Dublin. Terminal 2 includes The Loop shopping area, which allows you to do all your duty-free shopping online and then pick up your purchases at the airport on the way to your homebound flight.

Have you been to Dublin Airport? Leave any travel recommendations in the comments section below to help out your fellow readers!

Stubenville
If you're travelling from the west coast, it's probably worth an extra hundred or two (it is to me) to not extend your trip a couple of hours when you've already been flying ten hours, and to not double the risk of your checked luggage going astray. YMMV.

PS - London City airport is closest since it's in London.
Based on train trip time to central London, then Heathrow, Luton, Gatwick and Stansted (15 minutes, 21 minutes, 30 minutes, and 47 minutes.)

bob61571
1) Surprised that you didn't mention the great convenience of going thru US Customs @ the Dublin airport. Don't need to waste time on your return trip back home at your gateway.

2) Please allow 3-4+ hours to clear security there, when going back home to the US. We flew back on a slow day in November 2015, and it took that long.

pmcd8243
You missed a most important detail. On your way home through Dublin you can use US customs and border protection pre-clearance. Its quick and easy. No waiting in line on arrival stateside. Just land and go like you are getting off a domestic flight. One of only 2 pre clearnce sites in all of Europe( the other in Shannon, Ireland) an amazing time saver.
July 29, 2016

Paula Bradley (DealNews)
@boilers I'd imagine you're referring to budget airline WOW Air. This airline flies to Dublin too, and offers routes to other cities in Europe like London, Amsterdam, and Berlin. But be warned: this airline doesn't fly direct, except to Reykjavik, Iceland. We'd recommend choosing an airline like Aer Lingus or KLM, both of which fly direct to various cities in Europe.
July 29, 2016

boilers
I follow a bit of travel information every week. I've heard the lowest airfares can be found with Iceland carriers. I've also seen turkish air have sales that are very low.
July 29, 2016

VIEW ALL
Blog · Buying Guides · 1 day ago
Everything You Need to Know About Target Deal Days 2022
Prime Day is one of the biggest shopping events of the summer, but it's hardly the only one. Target has its own event! Check out our Target Deal Days 2022 preview and learn what to expect from the sale.
Blog · Morning Jolt · 2 days ago
5 Deals You Need to Know Today: Woot Says Summer Steals Are Here
Woot wants you to enjoy summer, where "summer" actually means "hundreds and hundreds of discounts". Check out this offer and more in our roundup of the five best deals we found over the last 24 hours.
Blog · Buying Guides · 2 days ago
7 Ways to Score Amazon Prime Membership Deals
Amazon Prime typically costs $14.99 a month or $139 a year, but you can get the service for less. Our tips for securing an Amazon Prime membership discount have you covered.
Blog · Buying Guides · 3 days ago
How to Shop and Save on Kids' Adidas Items
If you're looking for athleticwear, shoes, and casual clothes for your kids during your Back to School shopping, don't forget to check out adidas. Our guide on how to shop and save on kids' adidas items has the info you need.
Blog · Buying Guides · 4 days ago
Prime Day 2022 Deals Preview: See All of Our Predictions!
Amazon Prime Day is set to take place in July again this year, but what will the deals look like? Check out our Prime Day deals preview for our predictions concerning the 2022 discounts.

It's the lowest shipped price we could find by $6. Buy Now at Amazon

It's the lowest price we could find by $23. Buy Now at Kohl's

That's the lowest price we could find by $52. Buy Now at eBay