Stuff happens. If you lose your job, need a home repair, or wear out your car's engine, you'll require reserves to keep your life moving.
BY:
PAUL SISOLAK
DealNews Contributing Writer 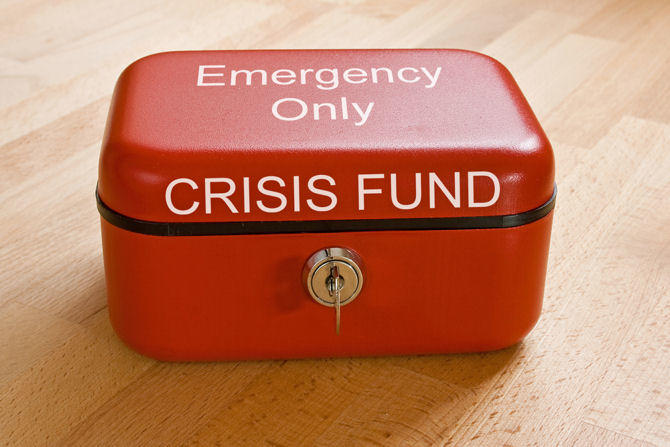 It's happened to the best of us: Your car dies on the way to work. The toilet blows up when you go to flush. Your entire division gets laid off. A sudden health crisis takes you by surprise.

Emergencies come in many forms, and they're even worse when they cost hundreds or thousands of dollars. Having an emergency fund at your disposal is akin to having your own personal insurance policy against the unexpected. You may never need to dip into it, but you should always have one stashed away in case a major expense comes along.

Barely one-third of Americans have enough money to cover even a single $500 setback.

Depending on your amount of financial responsibilities and the size of your household, an emergency fund should ideally cover about three to six months' worth of expenses (without any new income taken into account); but sadly, barely one-third of Americans have enough money to cover even a single $500 setback.

Here are some common reasons why you may need an emergency savings fund to dip into.

Downsizing, a shaky economy, or a lousy boss may cause a seismic shift in your employment status, leaving you without a paycheck. Your emergency fund will need to come into play, since unemployment benefits vary (and will eventually run out).

In a recession, there's a 30% chance of being long-term unemployed. According to U.S. Bureau of Labor Statistics, the average unemployed person is out of work for 30 weeks — more than half a year of falling back on savings to pay for your rent, mortgage, car insurance, credit card bills, groceries, etc.

It could be anything from injuries sustained in a car crash, to an unplanned pregnancy, to a root canal that can't be delayed. An emergency fund can soften the out-of-pocket blow of a medical expense not covered by health insurance. (For the uninsured, an emergency fund will need to foot the entire bill.) A standard procedure like an appendectomy can set a patient back nearly $14,000, and even one simple wisdom tooth extraction can cost several hundred dollars. Even when insurance covers you, an emergency fund can prove valuable if you need to take time off from work to recuperate.

SEE ALSO: 7 Ways You Can Prepare for Unexpected Medical Expenses

When your check engine light turns on, it doesn't matter how major or minor the problem is under the hood — for your bank account, it's an emergency. Engine trouble, like a head gasket or motor repair, can cost from $1,000 to $4,000 depending on the vehicle. Transmission trouble can also creep into the thousands, and even plenty of smaller issues may get invoiced at several hundred dollars. And without an emergency buffer to maintain your car, it'll stay undriveable indefinitely until you can come up with the cash.

Not every emergency needs to be immediate; some can build slowly before spinning out of control, financially speaking. Credit card debt is one such major problem in the U.S., averaging nearly $16,000 per household. If you've had to pay for some major expenses with your credit card, or if your balance has just gotten too large for too long, interest rates can send it into debt territory that's hard to escape, even with timely, regular payments. Dipping into your emergency fund can help avoid and assuage the financial burden that credit card debt brings.

Homeowners are already tasked with keeping up with mortgage payments, property taxes, and insurance, but a much-needed repair to your abode is no small financial feat. Pipes burst, roofs leak, basements flood, and septic tanks simply stop working on occasion. Simply put, an emergency fund is indispensable with the amount of stuff that can go wrong with your residence.

A single roof repair may result in a $12,000 bill, the average in the U.S., according to Angie's List. One major storm can cause water damage to your home's foundation that can cost between $10,000 and $40,000 to repair and seal. While an emergency fund may not cover the entire expense, it can offset the burden of charging it and dealing with the interest.

Funeral costs are often exorbitant (averaging between $7,000 to $10,000), and if it's an unexpected death of a family member or loved one, an emergency cash reserve can often soften the financial blow. If you're attending an out-of-town funeral, some reserves may be enough to cover the booking of a last-minute plane ticket.

If you're attending an out-of-town funeral, some reserves may be enough to cover the booking of a last-minute plane ticket.

Death is inevitable; so are taxes. Your emergency fund can also subsidize that property tax bill you forgot to pay, or when you owe more income taxes than originally calculated.

At least $15 billion was stolen from 13.1 million U.S. consumers in 2015, making identity theft one of the most insidious crimes that can happen to anyone. If your personal data, Social Security number, or credit cards are compromised, you may need to place a hold on your bank account and finances until the problem is resolved. An emergency fund (in cash) is something to rely on during this time.

Tips to Build an Emergency Fund

With an emergency fund, you can create something from nothing by starting with a few simple steps.

Keep Track of What You Spend

Document every expense every month on a piece of paper or spreadsheet — every revolving bill, and every small debit/credit purchase. Are you spending more than you need to? Look for ways to cut back and spend less; use the remainder to start creating your emergency fund.

Cull clutter and unused clothing or belongings from your closet, garage, or basement. Is there anything you can auction or sell to free up some cash?

Reach out to your insurance providers and lenders — auto, mortgage, credit card, etc. — and ask for a reduction in your interest rates. And don't hesitate to shop around for new rates and plans if what you're currently paying is too expensive.

Cut Back on the Cable

And other unnecessary expenses, for that matter. Opt for Netflix instead of an expensive cable TV subscription; do free exercises in the park or at home instead of a costly gym membership; and cook at home more often. Don't just pocket the savings, though; deposit them in your emergency fund. If one of the above situations becomes a part of life, you'll be glad your emergency fund was there to come to the rescue.

Readers, have you ever needed an emergency fund? What are your tips for saving? Let us know in the comments below.

snowy
Something can be said for opening a Betterment or Wealthfront account with one's emergency savings, it would pull in a lot more than a bank's standard 0 to 1 percent in interest. If it's truly for long term savings why not make a few percent more than a standard bank account in the process!
September 7, 2016

featherylock
Look at half your income, and realize that someone can live off of that much. Then do it!
If you can't, you need to take steps to remedy that problem. Educate, educate, educate (formally or informally)
September 1, 2016

Appropriately, yesterday was the 40th anniversary of John Bogle's biggest innovation - the index fund, a revolutionary investment tool that simply tries to match the market instead of beating it (at a much lower cost to the investor). Index funds now often out-perform many elite, highly-managed, expensive funds.

nimer
It's unfortunate that one of the richest nations in the world (if not the richest), and we still live paycheck to paycheck. Somehow regardless how much money we make, most of us waste it.

One of my favorite books is 'Enough' by John Bogle (The genius and founder of Vanguard group). John - and his brainchild Vanguard - are unlike any other finance company. To start with, it's a major financial force, nicely stated in Philly suburbs rather than Wall Street. More importantly, John preaches the culture of 'Enough'; not compromising, not being greedy, but being vigilant in financial and even all of life, recognizing what you have, and what's enough.
September 1, 2016

jonathan_gleich
This is half an article, you really need a follow up HOW to put aside money for emergencies.

jmcollins4
Interesting article. Thanks. For me, the best way to stay vigilant in building a savings fund (or emergency fund) is to set up a bi-weekly auto-transfer to my savings account for each payday. This ensures the money is safe prior to allowing for any unnecessary spending. Another idea (taken from Reader's Digest) is each time you receive a five dollar bill back in change stash that aside. This could be your at-home emergency fund or, once you have 20 bills ($100), deposit into your savings.
August 31, 2016

It's $152 less than a comparable model at Target. Buy Now at Walmart

It's the lowest price we could find by $15. Buy Now at Nike