With mere days to go before we all cram into crowded theaters for Jurassic World, what better time to remember some other famous dinosaurs that warmed our hearts? (Or chilled us to the bone!)

From movies, television, and beyond, most of the dinosaurs on this list are a heck of lot weirder than anything you'll see in Jurassic World. (On the bright side, these scaly stars are much less likely to eat your head!) 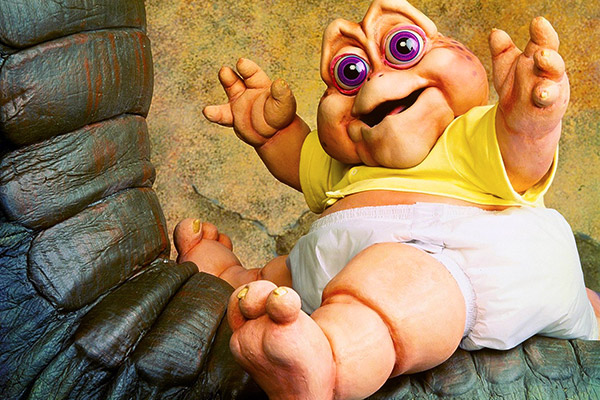 (Discovered in 1991) On ABC's live action Dinosaurs TV series — a sitcom starring dinosaurs, if you can believe that — Baby Sinclair was the clear breakout star. The diapered dino stormed to fame with his "Not the momma!" catchphrase, typically spoken while smacking his dad with a saucepan. 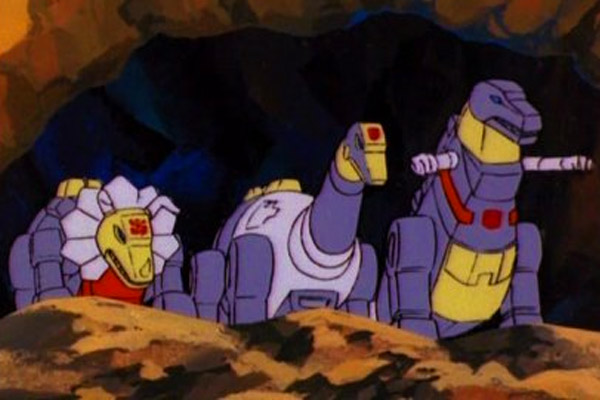 (Discovered in 1984) The famed brutes of the Transformers universe had a serious leg up on most other Autobots and Decepticons. Instead of transforming into cars or jets, these robots turned into dinosaurs! Led by Grimlock — a techno-tyrannosaur — the group included robo-versions of a triceratops, pteranodon, and more. 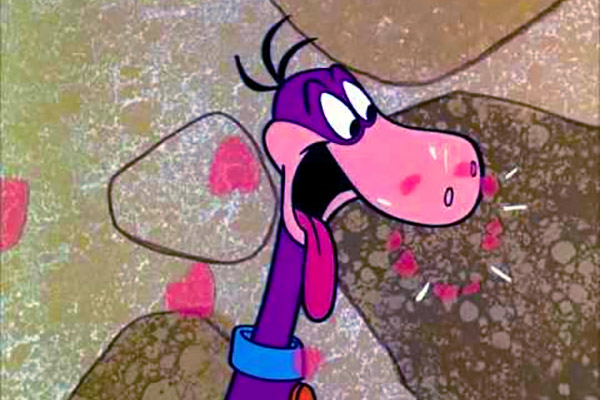 (Discovered in 1960) Fred Flintstone's pet snorkasaurus is beloved by all, and with good reason! The perfect blend of "dinosaur" and "dog," Dino often got the biggest laughs on a show filled with them. Gregarious, clumsy, and colored like a strawberry Jolly Rancher, Dino's been with the Flintstones family in all of its incarnations, from spin-off cartoons to live action films. 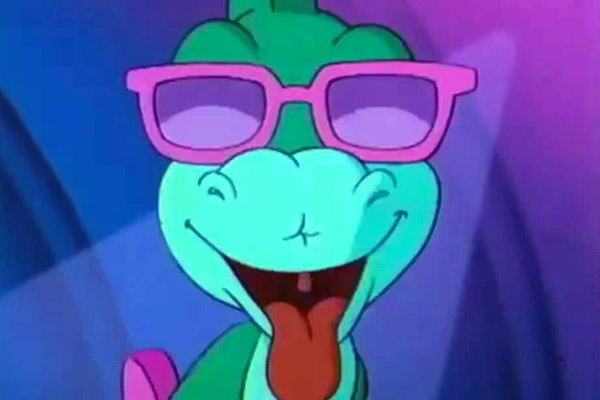 (Discovered in 1988) A super hip corythosaurus hatched in modern day California, Denver left his baser instincts in prehistory, instead opting to spend his days skateboarding and wailing away on an electric guitar. The cartoon series is best remembered for its theme song, which will still be in our heads come the next ice age. 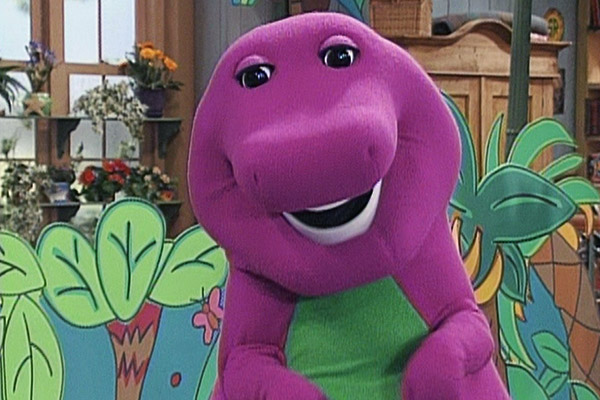 (Discovered in 1992) Titular star of Barney & Friends, this tyrannosaurus rather oddly preferred singing lullabies to eating people. While Barney can still be found on television today, we'll never forget his peak of fame in the early '90s, when no kid in the country could fall asleep without clutching a Barney doll. That dino was everywhere — whether you wanted to see him or not. 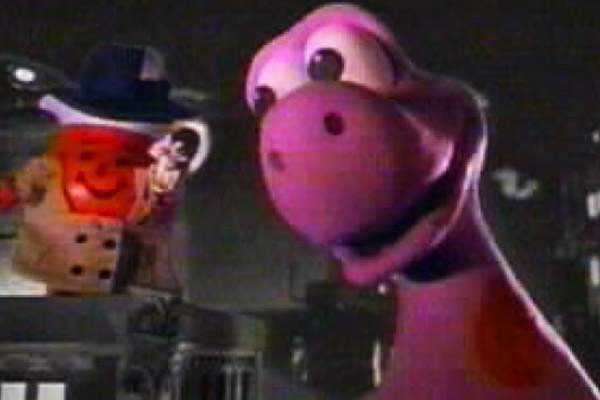 (Discovered in 1993) The Kool-Aid Man wasn't the drink mix's only mascot! Purplesaurus Rex had his very own Kool-Aid flavor — a delicious grape-lemonade that would've made kids swoon even if it wasn't fronted by a funkily-colored tyrannosaur. The "pre-hysterically purple" beverage recently returned after a long hiatus, gaining Purplesaurus Rex a legion of new fans, and delighting older ones who'd been praying for its comeback! 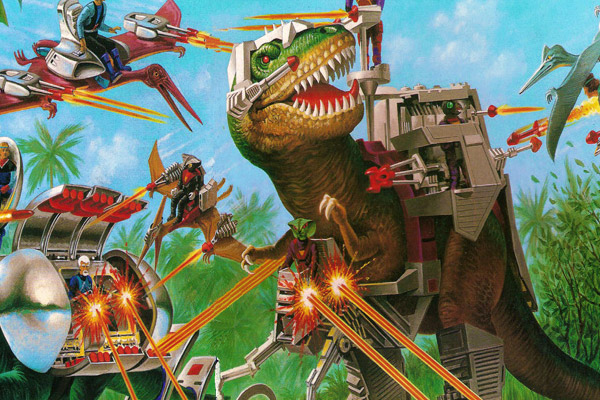 (Discovered in 1988) Dino-Riders told the story of warring races from the future, transported to prehistoric Earth. If that wasn't enough of a hook for the cartoon, the heroes and villains dressed dinosaurs up with all sorts of futuristic weapons, using them as beasts of brutality. If you thought tyrannosaurs were scary before, imagine one that could fire missiles at you! (Scary, yes, but it did make for a cool toy.) 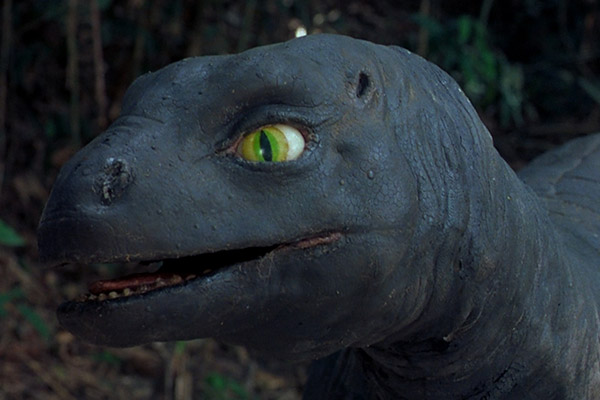 (Discovered in 1985) A film about a gaggle of present-day brontosauruses and the people striving to protect them, critics were largely unkind to Baby: Secret of the Lost Legend. The film got its title from the youngest of the herd: Baby, a diminutive dino brought to life through animatronics. The effects may be crude by 2015 standards, but watching a baby brontosaurus act like an adorable kitten is worth the price of admission. (Especially since that "price of admission" usually amounts to the $2 DVD bin at Best Buy.) 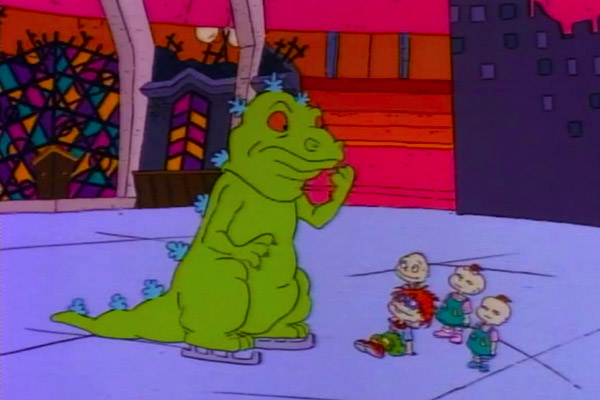 (Discovered in 1991) On Rugrats — Nickelodeon's smash series about a bunch of toddlers with curiously good vocabularies — Reptar was basically Mickey Mouse. The kids' most beloved fictional character, this purported "tyrannosaur" looked more like Godzilla. On the series, Reptar had everything from a theme park to his own spin on Ice Capades, and all the merchandise that came with it. (It wasn't much different in the real world, either. The success of Rugrats led to oodles of Reptar toys that real kids could beg for.) 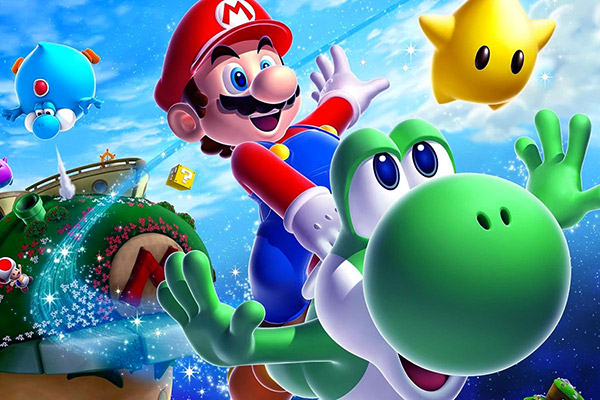 (Discovered in 1990) Could anyone have imagined that Yoshi — essentially just a power-up in 1990's Super Mario World — would go on to enjoy such enormous fame? Now one of Nintendo's most instantly recognizable characters, we admit that we're not 100% sure that Yoshi's really a dinosaur. He's dinosaurish, at least. Yoshi starred in more than ten Nintendo games to date — and that's not counting all of the games he merely appeared in!

Think we missed a key dinosaur from pop culture history? No need to sic a raptor on us — just tell us about it in the comments!

Alison Barretta (DealNews)
I loved the Land Before Time as a kid. It was the first movie I ever saw in the theater. Bet I have the Pizza Hut hand puppets somewhere, too. By the way, the sequels are *not* worth watching. Ugh.

Props to the author for including Denver the Last Dinosaur AND Dino-Riders. I always wanted the Dino-Rider toys.

India-dealnews
Yes, this should have 11 dinos on it! Littlefoot! Loved this movie as a kid, the second one was alright too, but they did get a little out of control when they kept making them. What like 5 or 6 total??

Lindsay Sakraida (DealNews)
The Dinosaurs show blew my mind when I was a kid.
June 11, 2015

"The Dinosaucers are leaving, Bossosaur" may be the funniest thing I've heard this year.
June 11, 2015

huertac1
Unfortunately Barney is still alive and well in this household!
June 10, 2015

Lindsay Sakraida (DealNews)
Without fail, Land Before Time still makes me think of Pizza Hut. That was especially effective branding I guess!
June 10, 2015

That's the best price we could find by $13. Buy Now at Macy's

That's a $6 savings on whichever one you choose. Buy Now at Walmart