Why UGGs Rarely Go on Sale

Cozy, sheepskin-lined boots from UGG Australia have been a much-coveted item for several years now, and the brand itself evokes a desirable caliber of quality. All of this, naturally, comes at a high cost. However, if you've had your heart set on a pair of UGGs and have been deterred by the hefty — and infrequently discounted — price tag, then take heed: now just so happens to be the best time ever to buy a pair of UGG boots.

UGG is notorious for its very strict pricing policies, which binds all retailers to a Minimum Advertised Price (MAP). This stops stores from advertising prices below an amount specified by the manufacturer. UGG has used this number to keep a stranglehold on its merchandise pricing, forcing most stores to carry items at a standard price across the board. This is also why customers typically don't see UGG footwear heavily discounted.

UGG, however, hasn't had a great holiday season, and many stores have been left with a large amount of unsold inventory. For consumers, this translates into unprecedented discounts, the likes of which we might not see again. Below, we flesh out the details about the sales, including why, when, and how much.

Why Is UGG Australia Allowing for Bigger Discounts?

Despite some rogue snow storms this year, warm winter weather for the past two years has brought bad luck for UGG. Sales have lagged all year at most stores and the price of shares has been dropping steadily since October 2011, according to company earnings releases and investment industry analyst reports. 2012 third quarter sales fell 11.6%, compared to having seen a 47% increase for the same time period in 2011.

There Are Too Many UGG Styles
Retail sources say that they are allotted only a specified number of "classic" styles (the basic ones that everybody wants) per chain or store, and that they are required to carry a selection of "fashion" UGGs, which are very high-priced and less conventional boots that don't have that quintessential UGG look. One merchant, who wished to remain anonymous for fear of facing the wrath of UGG Australia said: "UGG is like Apple," in that it is known for an iconic design. "Nobody wants a knock-off of it or an UGG boot without the label or the look." As such, many of these fashion styles didn't sell this holiday, and there's lots of leftover stock to move.

Customers Already Weary of High Prices
Last year, UGG decided to increase the retail price of several of its styles to account for rising costs, but in its October 2012 earnings report UGG Corporate announced that it would instead cut retail prices in an effort to cater to a growing number of customers who were reluctant to pay the big bucks for the fuzzy footwear. (You may have seen some boots marked as featuring a "New Lower Price," which represents that policy.) The footwear manufacturer was worried that it had "pushed [UGG products] above the consumer's price-value expectations."

Every year since its original listing on Oprah's "Favorite Things" back in 2000, UGG has increased distribution of its footwear to reach most national department stores, regional and independent stores, sporting goods chains such as Dick's Sporting Goods and Sports Authority, and ski shops. The brand even opened several of its own retail stores in large cities across the U.S. Even though UGG restricts many smaller retailers from selling its boots online, several larger online retailers are permitted to do so, including Amazon, 6pm, and Zappos, which have huge assortments. This has all resulted in an over saturation of the market.

Fashion Trends Change
Some speculate that the UGG fad is over. However, while UGGs as a fashion item may be superseded by, say, combat boots, they still maintain a genuine utility, as they're warm and comfortable for winter use. So while the trend may no longer dictate the premium price tag, there's still demand for a well-constructed and purposeful product — making the current UGG sales all the more enticing for consumers.

With such a wide distribution, there are plenty of UGGs to go around, and stores can skirt the pricing system to move excess inventory when necessary. In years past, when distribution was tight and demand was high, retailers wouldn't chance it, but now they say it's necessary. One seller with a lot of overstock said: "During the holidays, I had many fashion styles marked down in-store for a temporary 25% off sale, and I didn't advertise the sale so I didn't violate the MAP policy." So, if you see a sign on a window at one of your favorite local shoe stores that says "UGG Sale" head right in for unadvertised markdowns.

Discounts of Up 50% off
Last year, UGG sellers were left with large amounts of fashion and classic inventory, and even with discounts of 20% to 33% off, they still couldn't move the high-priced boots. As a result, one seller said that this year, markdowns would be deeper. "Forget about 33% off on that fashion stuff. I'm starting my markdowns at 50% off."

No Exclusions on Storewide Sales
UGG used to have very strict stipulations that excluded the brand from any storewide sale or discount. (That's why the brand isn't eligible for most coupons.) But since stores are growing desperate to sell off inventory, some are including UGGs in storewide discounts to help move the expensive merchandise. 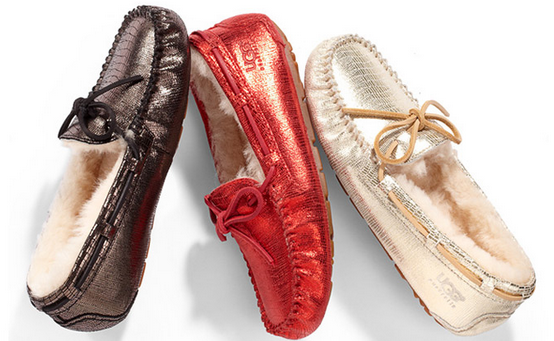 In addition to the boots, most websites are also offering leftover inventory from summer 2012 at significant discounts. Look for markdowns on sandals, fashion wedges, heels, and flip flops. Many of the fashion styles on sale are just classic UGG looks with embellishments.

These discounts come in addition to last season's styles, which are already marked down online. For example, 6pm takes up to 47% off a variety of women's clearance styles, including sweater boots like the Leland, and offers a wide assortment of snow boots for under $100. Meanwhile, Zappos has a slightly different assortment of clearance styles and colors marked down up to 40% off, as does The Walking Company. Many other stores feature comparable discounts, including Journeys, Nordstrom, Belk, and even the UGG Australia site.

Will the Price Drops Last?

While there's a plethora of unsold UGGs, these above average discounts might not become a permanent allowance. According to analyst reports, UGG sales representatives have acknowledged over-distribution and retail buyers have said that they plan to cut back on orders so there won't be as much overstock in the future. UGG Australia also plans to weed out retailers that defied its MAP policy or discounted the brand too heavily. This could mean that stores won't chance extraordinarily deep sales again.

These overlapping factors during yet another unseasonable winter make it the ideal time to buy an otherwise-pricey pair of UGGs. If you're interested in a pair of snUGGly boots, set up an email alert now so that you receive notification as soon as we post a deal.

lottiedah
Even with the discount, they are still expensive....
January 15, 2013