People Have Been Lining Up for the iPhone for Days Now

There's no guarantee that they'll even be able to buy the phone tomorrow when it's announced.
BY:
LINDSAY SAKRAIDA
DealNews Contributing Writer 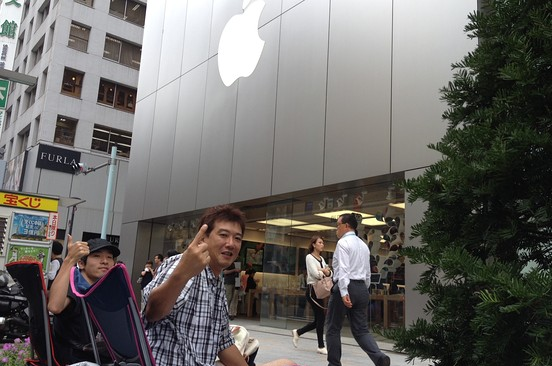 Here at DealNews, we're quite familiar with the notion of shoppers camping out in order to be the first to buy something — but that's usually in pursuit of a hard-to-obtain TV deal or some such doorbuster in limited supply. You'd hardly think it necessary for a widely-available smartphone, right?

And yet, people have been street-sleeping for several days in anticipation of Apple's rumored iPhone 6 announcement tomorrow. According to the Wall Street Journal, fans in Japan are waiting patiently outside of the Tokyo store, and are apparently forming a makeshift community in which fellow line-standers "take turns taking a bath at nearby bathhouses."

Shoppers in Japan have lined up since Saturday, while in New York, people have been parked on the concrete for even longer — some as early as August 31. However, a select few in NY have ulterior motives to promote products to the journalists that inevitably interview them about their "adventure." While it's not surprising that promotional needs might motivate some, others reportedly just want to experience the hype firsthand.

Readers, what do you think about iPhone campers? Are any of you currently viewing this outside an Apple store, enduring the heat and humidity just to get your hands on the latest iDevice before your friends? Get colorful in the comments below!

phear3d
If people want to line up to get a cup of coffee in the morning, then thats their right to do so. You can't expect them to follow your own judgement. No one's telling you how to live your life. Let them live theirs the way they want them. Be a phone, a console, or a new donut reveal, who cares and why should it affect your life. You still get to breathe the same air they do. Let them have their fun or mistakes while you sit there and relax and have your own way of living.
September 16, 2014

MackieMesser
Stonacek, Apple not paying taxes is reprehensible, to be sure, but you'd possibly be interested in knowing they aren't the only one: http://www.forbes.com/...le-have-it-their-way-too/

So saying "NO" to Apple would also mean saying NO to Google and Microsoft. That leaves you with possibly Blackberry, if you want to use a Smartphone, based on your logic.

I agree that it's silly to camp out for days for a product, but if what these people do doesn't harm anyone, then big deal. Samsung, for all the fun they make fun of iPhone "sheep," would love for people to be lined up for THEIR products.

Mig48
I have better things to do than waste a few days waiting for the next soon-to-be outdated device. Although I may wait in line that long for GWAR on Ice tickets if that would ever happen.
September 8, 2014

Stonacek
How about IF Apple would actually pay their fair share of "US Corporate" taxes. All you brainless, people who stand in line for a new iphone, "Announcement" not even the sale of the new gadget, end up showing un American support of a company who is "Un American" selfishly hiding all their sales to US residents & shipping the profits offshore to selfishly hide from paying their fair share of US Taxes is an absolute shame & embarrassment of ANY US Corporate structure, let alone Board of Directors, stock holders & YES, you fools who have to pay TOO MUCH $$ for a PHONE! it's a PHONE people! There are other Pone & electronic corporations (US & Non US) who are much more US Friendly than Apple! Wake UP FOOLS! Protect the USA & say NO to Apple, until they begin to act responsibly! Just my 2cents, & yes I pay my fair share of taxes, unlike You Mitt Romney fans!
September 8, 2014

mark6788
God if you people have nothing better to do than complain about other people and their time and money, pay their bills for them then, but until you do, shut up!!
September 8, 2014

Tiernan
Mind-numbed morons - no thoughts of their own.
September 8, 2014

Cilvre
people waiting in line are an example of why our society is crumbling.
September 8, 2014

nagol68
I just don't get it anymore. When the first few iPhones came out (Ending with the iPhone 4) I wanted one so bad. They were amazing and there wasn't to many phones that even compared. But now with the HTC One M8, and Samsung Galaxy S5, and Nokia Lumia Icon available for the same price, and they do WAY more! I have the Nokia Lumia 520 (Paid $99 no contract a year ago, about $500 cheaper then the iPhone 5C, the 'Cheap' iPhone) and it does pretty close to everything the 5C does!! Plus because it's so cheap I plan on upgrading, to probably another Lumia phone, in the next year and still have spent less the half the price of ONE iPhone. There isn't really anything super amazing with there new iPhones either, a finger print scanner was really the only major thing they did first before the other companies in the last generation of phones. Unless Apple makes a phone that can teleport me to talk to my family, then I just can't see spending that much.
September 8, 2014

That's $5 less than you'd pay to have it shipped from Walmart. Buy Now at Amazon

Get better than half price on this today. Buy Now at Walmart

Save on fragrances from Abercrombie & Fitch, Christine Dior, Marc Jacobs, and more. Shop Now at Perfumania