Palm Pre: The affordable smartphone we've been waiting for?

After years of silence, Palm is re-entering the handheld market with a new smartphone that's being called the iPhone's biggest competitor. Due later this year, the touch-sensitive Palm Pre will make its debut alongside a new Palm operating system called WebOS. We compared both the phone and the software against today's hottest smartphones to see how it stacks up against the competition.

Announced at this year's Consumer Electronics Show, the Palm Pre has managed to win awards before its official release. dealnews had the chance to see the phone and the new OS in action while at CES, and while we didn't get a unit to take back to the office, we did get an impression of what the upcoming handheld is capable of doing.

Hardware-wise, the Pre is a compact slider with a glossy, Piano Black exterior. It packs a sliding QWERTY keyboard reminiscent of Palm's Treo smartphones. Although its screen is smaller than the iPhone's, it has the same resolution. Like the iPhone, the Pre's screen also has a light sensor, which conserves battery life by dimming the display when sufficient ambient light is present. A proximity sensor disables the touch screen whenever the phone is held up to your ear.

Weighing in at 4.7 ounces, the Pre ties the iPhone as one of the lightest smartphones on the market (although the Pre is a little chunkier around the waist.)

On the back of the phone you'll find the Pre's 3-megapixel camera and speaker. There's also a 3.5mm headphone jack that will let you pair the phone with your favorite headphones. The phone also supports wireless headsets via its built-in Bluetooth 2.1 + EDR connectivity. Other types of wireless connectivity include Wi-Fi (802.11b/g) and 3G support or EV-DO Rev. A.

A unique feature of the Pre is its Touchstone charging dock (pictured at right). This wireless dock (there are no wires between the phone and the dock) has magnets that snap your phone into position so you can check e-mail, look up contacts, or surf the Web while your phone is charging.

Other features include a removable battery and built-in GPS. What the Pre lacks is expandability, since there's no support for media cards of any kind. Fortunately, the Pre can be used as a USB mass storage device, so you can drag and drop content from and to the phone. Palm also hinted at the possibility of releasing a 16GB version of the Pre.

WebOS
The Pre's most exciting aspect is its new mobile platform, WebOS. The new OS was built from the ground up with almost no traces of Palm's previous platform. The OS was designed to bring you all the information you need and present it in a streamlined manner. Palm calls this feature Synergy. For instance, if you have a contact who's on Facebook, GMail, and Outlook, WebOS will display all of that contact's information as one listing, essentially creating a unified contact entry. Likewise, if you start a conversation over IM and later your contact signs off and logs onto their phone, WebOS will then attempt to reach your contact via SMS without requiring you to manually switch to SMS.

Like the G1 and iPhone, the Pre features a built-in accelerometer that lets the phone alternate between portrait and landscape modes. The last time we tested a phone with an accelerometer we were highly disappointed, but fortunately the Pre showed no lag and was very responsive. In addition, whereas most touch screen interfaces have been rigid and stiff, Palm's OS was smooth and natural. Pages and animations glided off the phone's screen displaying the proper amount of inertia with each corresponding finger swipe. 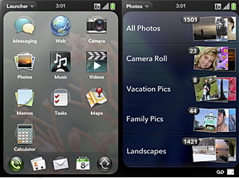 Unlike the iPhone, the Pre is capable of running multiple apps simultaneously. Each app is represented by a card or window. To navigate through open apps, simply swipe your finger across the "cards." To close an app, flick the "card" off the Pre's screen. Palm admitted to having an app store in the works, although it was unclear whether it would be available for the phone's launch.

Another cool feature is the Pre's ability to perform universal searches. From the main screen, you can type a word and the phone will automatically search locally for that term. If no match is found, it will present you with the option of searching for that term on Google or Wikipedia.

On the multimedia side, the Pre will handle both MP3s and video. Specific formats weren't announced, but we suspect it will support most formats as long as there is no DRM attached.

Verdict
The Pre will debut later this year as a Sprint exclusive. (There will also be a GSM release later in the year.) Pricing hasn't been confirmed, but rumors place it between $149 to $199. (An unsubsidized Pre might also go for $399.) A $149 price point would certainly be competitive and undercut even the T-Mobile G1, helping Palm reclaim its spot as the smartphone champ. However, we're still months away from the Pre's release and a lot could happen between then.

Ultimately, it's the software and not so much the hardware that will make the Pre. Palm's new interface is the best smartphone OS we've seen since the iPhone's, and in numerous occasions it even manages to outsmart its rival. The iPhone's biggest advantage is its app catalog. If Palm can gather enough developer support and hit the right price point, it will be an easy win for the Pre. In fact, even though the phone hasn't been released, Apple and Palm have already been exchanging words over the upcoming fight. Although I think the iPhone is an excellent smartphone with a great interface and industrial design, my money is on the Pre for the first round.

For a look at the how the Pre stacks up to today's best smartphones, check out our chart on the next page...