High definition is the holy grail of video. However, unless you're subscribed to a monthly cable or satellite plan, finding HD content can be difficult. Fortunately, the Internet has a growing number of sites that provide free (and legal) HD programming. From the Tonight Show to Grey's Anatomy, the following sites can help satisfy your HD fix.

With 11 full episodes, Hulu's high-def gallery remains modest, but the site's simple, friendly interface makes it one of the most easily accessible places to find HD content. Shows streamed perfectly on our 2.2GHz MacBook Pro, but we hit some initial lag when we played them in full screen. The site, which is consistently updated, allows you to subscribe to your favorite programs (very much like TiVo's Season Pass) and e-mails you when new shows are available. Although the site's HD catalog contains popular shows like Heroes, The Office, and 30 Rock, there are no full seasons of any show available in HD and there's no way of telling when your favorite show might disappear from Hulu's library. All shows contain commercials, but the ads aren't intrusive and you can even vote on which ads you like/dislike.
Content: 6/10
Streaming Experience: 8/10

With 100,000 HD videos in its catalog, Vimeo boasts one of the largest HD collections we've ever seen. However, you won't find any commercial content here. Instead, Vimeo is filled with experimental and documentary-style shorts with topics that range from surfing in Australia to glass blowing. Anyone can upload their video to the site (think of it as a YouTube for people with actual talent), and members can also vote for their favorite videos (membership is free). With so much HD content under its belt, you'd think Vimeo would have an excellent way of cataloging it, but unfortunately it doesn't and to browse through the collection you must click through 134 pages of video. Fortunately, the site has a clean layout so we didn't mind the browsing too much. Of all the sites, Vimeo provided the best video quality, with many of its videos in 720p. Best of all, there were no ads.
Content: 9/10
Streaming Experience: 9/10

All three major networks offer online HD programming, but of the three, ABC delivers the best package. At the time of this writing, it had 8 series available in HD, including popular shows like Ugly Betty and Grey's Anatomy. Unfortunately, ABC isn't consistent with the content it offers. For instance, it has almost every episode and season of Lost available in HD, but only 6 episodes of Grey's Anatomy. Likewise, the quality, while good, is not comparable to that of the other sites. In fact, the ABC pop-up player features a Bitrate Meter, which indicates (based on your Internet connection) the quality HD you're capable of receiving. Also, if you're trying to stay away from ads, ABC might not be for you as we found that on average it featured twice the amount of embedded commercials we found on Hulu.
Content: 7/10
Streaming Experience: 7/10 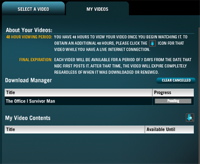 If it's hassle-free video streaming you're after, stay away from NBC. Although it offers roughly 65 programs in HD, viewers must jump through numerous hurdles before reaching NBC's HD gold mine. Unlike the competition, NBC doesn't let you stream HD content, instead you must download it. However, before you can do that, the site requires that you create a free NBC account and download five pieces of software, including a plug in for your browser, the NBC Media Player (Windows only), and OpenCASE Media Agent. In addition, during setup you must opt to join NBC's Direct P2P Network, otherwise you can only view standard quality shows.

Our initial attempt at downloading an episode of The Tonight Show with Jay Leno failed after the NBC player froze on us. After a quick relaunch, we were able to download our show in just under 10 minutes. It's worth noting that the files you download are protected with DRM. Also, you can only play them on the computer they were downloaded to and they expire after 48 hours. The quality of the videos was sharp, but nothing compared to what Hulu and Vimeo offer. NBC calls their player NBC Direct beta, and we agree, the site is a work in progress. So unless you enjoy DRM, cryptic downloads, Windows Media Player plug-ins, and resource-hungry apps, we recommend avoiding NBC at all costs.
Content: 7/10
Streaming experience: N/A

Although CBS was the last of the major networks to offer HD streaming, it manages to stand up to its rival, ABC, with a modest roster of shows and a well-designed interface. The site's design, which is very similar to Hulu's, lets you stream HD videos (720p) directly from your browser. In total, CBS offers 26 shows in HD, including How I Met Your Mother, Two and a Half Men, and even day time shows like The Price is Right. However, the site falls short with the number of complete episodes it offers. For instance, of the 25 episodes of How I Met Your Mother that are available, only two of them are full episodes, the rest are clips.
Content: 6/10
Streaming Experience: 8/10

Although it doesn't stream your favorite TV shows, Vimeo's massive HD collection, superior video quality, and unique content make it our favorite go-to site for HD programming on the Web. Our hats also go off to Hulu. Though it has limited HD content, it has the best variety of programming with shows from NBC, FOX, and even National Geographic.

In addition to the sites we mentioned, other webpages like Apple's QuickTime Guide and Microsoft's WMV Content Showcase provide small clips and trailers in HD. NASA also has a modest HD gallery of footage that includes space shuttle launches and space exploration. For HD aficionados, none of these sites can replace a real HD cable plan, but for the casual viewer, they can provide you with hours of entertainment on the cheap.

VIEW ALL
Blog · Buying Guides · 3 hrs ago
59 LGBTQ-Owned Businesses You Can Support This Year
June is Pride Month, so if you're looking for a spate of LGBTQ-owned businesses to support with your wallet, we've got you covered! Check out our guide for 59 shops to check out now, as well as tips on how to find more.
Blog · Morning Jolt · 11 hrs ago
5 Deals You Need to Know Today: Under(priced) Armor at Amazon
Finally, a good excuse to use the word "pauldron" on this website – it's been ten long years. Check out this offer and more in our roundup of the five best deals we found over the last 24 hours.
Blog · Buying Guides · 2 days ago
The 9 Best Things to Buy in June (And 4 Things to Buy Later)
While June may be a prime time for vacations, it's also a great time to find excellent deals. Check out our guide for what to buy in June and what you should hold off on until later in the year.