NVIDIA Disabled GPU Overclocking, Then Reversed Its Decision When PC Gamers Freaked Out

Customers did not like the latest NVIDIA driver update...
BY:
LOUIS RAMIREZ
DealNews Contributing Writer 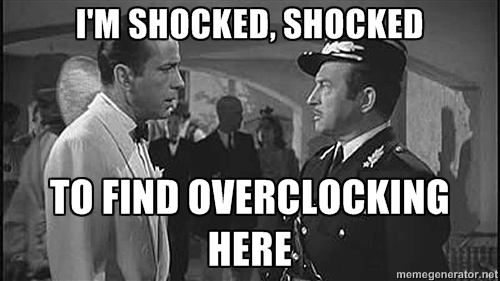 A blazing fast video card can make the biggest PC gamer act like a giddy school child on Christmas morning. And for years, PC enthusiasts have enjoyed taking their GPUs to the limit through the act of overclocking, which in its most basic terms means pushing your CPU or GPU above its factory-set specifications.

This popular act of modding has become a point of controversy of late, as NVIDIA — which is currently enjoying a nice boost in GPU shipments over rival AMD — intentionally disabled overclocking on its GTX 900M series GPUs.

It all started when users noted they couldn't overclock their GTX 900M GPUs after installing NVIDIA's December 17 GeForce R347.29 driver release. Users immediately turned to NVIDIA's forums where the nightmare began. NVIDIA posted the following on the forums:

"Unfortunately GeForce notebooks were not designed to support overclocking. Overclocking is by no means a trivial feature, and depends on thoughtful design of thermal, electrical, and other considerations. By overclocking a notebook, a user risks serious damage to the system that could result in non-functional systems, reduced notebook life, or many other effects."

"There was a bug introduced into our drivers which enabled some systems to overclock. This was fixed in a recent update. Our intent was not to remove features from GeForce notebooks, but rather to safeguard systems from operating outside design limits."

To the company's credit, overclocking is risky for the inexperienced user. It generally voids your warranty and if performed incorrectly, it could brick your video card, your notebook, or both.

However, overclockers are a tech savvy community and they generally know how far they can push their GPUs before a complete meltdown. Moreover, many companies like Intel, AMD, Asus, and MSI support overclocking with free tools that facilitate the process. NVIDIA itself used to provide overclocking information for its users.

Simply put, overclocking was a major feature (certainly not a "bug") that various manufacturers used (and still use) to sell their products to PC enthusiasts — and customers were none too pleased about the change from NVIDIA.

Much like when other companies have tried to strong-arm their customers into accepting new policies, there was a major backlash from, namely, the gaming community. And just this weekend, NVIDIA backpedaled and announced that it would once again allow for overclocking. However, customers have to wait until the next driver update, which might not come until next month.

Readers, does NVIDIA's flip flop make you think differently about your next video card purchase? Sound off in our comments below.

thebs
Reducing lifespan is why I don't overclock, much less overvolt. I like to get 5+ years out of systems, even 'hand-me-down,' let alone for GPUs, I resell after 2 years of usage. Stating I've never, ever overclocked an unit does wonders for the resell value. I always get at least 60% of what I paid for a GPU even 2 years later.
April 24, 2019

Pittman90
the fact is who is stupid enough anyways to overclock a laptop
February 24, 2015

Rhythmic
I wonder if anyone will make a virus to exploit overclocking of these GPU's in laptops.
February 24, 2015

kyungone
This type of issues will hit the tech-savvy users first. Although these tech-savvy users may not be the major % of the consumers market, they can make impact to the others by posting articles and giving advice to non-tech savvy users.

What's worth on this case is #1) GTX 900M is a high end device so they have more tech-savvy users involved on this case and #2) they disabled overclocking that's been worked before so users will feel like NVIDIA 'took away' something from them. If 900M driver came out as overclock disabled uproar from users won't be as loud as this one.

Yes, this is a driver for high-end notebook so overclock is not really recommended but again.. you just got a make those users happy..

Terry1
I think it has more to do with the principle of the matter. On a side note, I would not overclock my laptop, no space for upgraded cooling systems, but it should be my choice. The idea of them acting like a parent that knows best, brings back the attitude of Microsoft when Xbox One was first released. The gaming community has no loyalties and that is a good thing.

I don't think this will hurt Nvidia, since they backpedaled, they have a darn good product and did take action to resolve consumer complaints.

roach412
On mobile-focused GPUs, I don't necessarily see a reason for "uproar"...I like having my independence to do what I want with what I own, but I personally wouldn't get upset if this happened to me on my laptop. I also wouldn't OC my laptop...since, well...it's a laptop. The risk for reward is simply not there. Those of you that primarily game on and OC your laptops, that's great. I don't, and wouldn't - but that's my personal choice, since it doesn't fill a need(or a want for that matter).
February 23, 2015