Microsoft's next operating system will feature HoloLens and Cortana, but we're most excited about it's price: free to all Windows 7 and Windows 8 users. That's a first.
BY:
LOUIS RAMIREZ
DealNews Contributing Writer 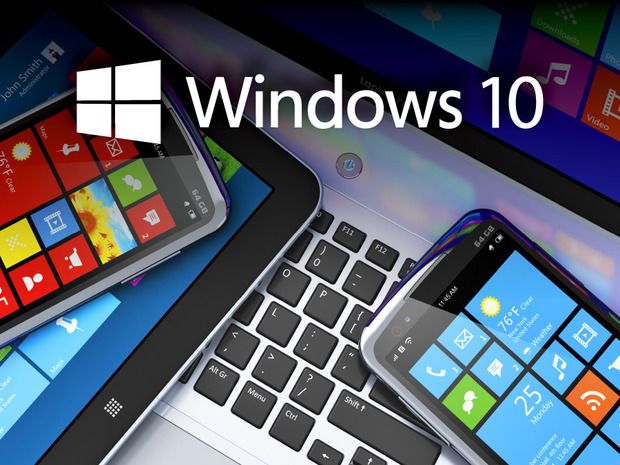 Microsoft ushered in a new era of its Windows operating system on Wednesday afternoon. While we're excited about all of Windows 10's new features, as deal hunters, its the OS' price that got us all hot and bothered. The Redmond-based giant confirmed that Windows 10 will be offered as a free upgrade for Windows 7, Windows 8.1, and Windows Phone 8.1 users. There is a catch, however.

The OS will only be available to download for free for a year, and Microsoft neglected to mention what downloads would cost once the year is up. (Most media outlets are assuming that there won't be further costs after a year for the freebie downloaders, but the fine print for the offer probably won't be available until Windows 10 is out.)

Nevertheless, Windows 10 is the first major operating system upgrade that Microsoft is offering for free. The complimentary upgrade could be an attempt by Microsoft to rectify the release of its last OS, Windows 8, which many manufacturers claimed hurt the sales of Windows PCs. Likewise, it could be Microsoft's answer to Apple's last OS updates, which were also distributed free of charge.

A Service, Not a Product

At a Windows 10 event in Redmond, Microsoft operating system chief Terry Myerson likened Windows 10 to a service, rather than a product. The Microsoft Windows 10 website also states that once a qualified Windows device is upgraded to Windows 10, Microsoft will continue to keep it up to date for the supported lifetime of the device for no additional charge.

The new OS, which has yet to receive an official release date, will come packed with features like Cortana, Microsoft's digital assistant now available on PCs; Spartan, a redesigned browser for Web surfing; Xbox on Windows, a way of streaming Xbox One games users already own across all their Windows 10-enabled devices; and Windows Holographic, Microsoft's take on augmented reality that when paired with Microsoft HoloLens, will let users interact between the physical and digital worlds.

There's no official release date yet for Windows 10, and Microsoft has yet to announce system requirements for the new OS. Still, we're looking forward to Windows 10's roll out and equally excited about the extra cash that will remain in our wallets.

What do you think, reader? Will you upgrade to Windows 10 right away? Let us know in the comments below.

mrmet15
Is Windows Media Player going to be part of Windows 10? If not can it be purchased separately? If not how do we play or rip music in Windows 10

Kyser_Soze
"During the 2015 Build developers' conference, a Microsoft executive confirmed that Media Center would not be updated for or included with Windows 10, thus the product would be discontinued."
Great! After I made 4 dedicated Media Center PCs. Thanks MS.
June 14, 2015

johnegopher
My Windows 7 Ultimate pc has a blu-ray drive, two tv tuner cards, and a remote, and I use it for my main media center and dvr. So for me to upgrade to Windows 10 my main concern is whether the Windows Media Center (which I love and use daily) will be includef and have continued support from MS. If not, then when this pc dies I'll build a new one and put Win 7 back on it too. Fingers crossed.
January 27, 2015

chew2train
I bought a Dell 17" laptop (that came win Win 8.1) based on a deal here. Instead of going on the Win tax treadmill, installed Linux Mint and loving it! Navigating to apps is a breeze and pretty much any apps i need is available via the free Software Center or using cloud-based apps (like Evernote).
No mess, no fuss!
January 26, 2015

Exteban
Skipping the 9th sounds like Microsoft is trying to avoid ending up like Beethoven:
http://en.wikipedia.org/wiki/Curse_of_the_ninth
January 26, 2015

ninny1176
@ronaldafloor - You switched from W7 to Win10? Why would you do that? It's not ready for public use, so it's not surprising that there are app issues, especially with system level software like anti-virus. Plus Norton sucks - Webroot or VIPRE are much better - but still wouldn't install them into Win10 without the makers giving the green light
January 26, 2015

bciocco
For me, the main problem with upgrading is the hassle of finding drivers for all of the old hardware. Upgrading from XP to Win7 was tough for me. I lost the use of a nice flatbed scanner due to hardware and software changes (no parallel port and no place to instal the card). I still have an HP 4P laser printer that I am using as my main printer. Now, it is connected through a serial to USB adapter that's sometimes wonky. I don't look forward to setting up another OS and possibly losing it.
January 26, 2015

ronaldafloor
I loaded Win 10 over the weekend. Switched from 7. So far "It" is telling me Norton 360 Premiere is not compatible.
January 26, 2015

ninny1176
@joshua305 - I bet there will be two versions - Windows 10 and Windows 10 Enterprise (covered by SA agreements). The latter would likely contain features that are only available thru the use domains, or infrastructure management.
January 26, 2015

nagol68
Windows 10 will be free to upgrade for the first year, just like it cost $15 to upgrade to Windows 8 for the first few months. There will be no monthly cost at all. They will make their money from Xbox Live, Office, Skype, Windows Store, and on hardware like Lumias and Surfaces.

And I am posting this comment on Windows 10 right now. I love it. Start menu is back (Unless you don't want it to be), multiple desktops, Cortana, and a lot of more new features (Even new features in CMD for the hardcore users who don't care about the other changes).
January 26, 2015

joshua305
I was wondering if they explained how the upgrades would work as they relate to different desktop versions of the os (Pro v. Home or whatever they call it)? Are they still going to deliver hobbled and full versions or can we all upgrade to the full version?
January 26, 2015

datdamonfoo
I will be upgrading my two desktops, my htcp, my laptop, my tablet/laptop hybrid, and my two tablets to Windows 10 as soon as it comes out. I love Windows 8 (it's just Windows 7 with a different start menu) and Windows 10 looks even better.
January 26, 2015

Lindsay Sakraida (DealNews)
@HowardaC There were rumors a few months ago that Windows will transition to a subscription based format, rather than a flat fee purchase. Since Microsoft didn't say anything about price, it didn't really lay the rumors to bed. We tried to note the possibility of this but that most sites seem to assume this is going to be a flat fee thing, and therefore, if you upgrade in the first year, it's completely free with no other costs.
January 26, 2015

HowardaC
First off there will be no cost, period. I'm not sure where people are getting that idea.

The REASON there won't be a cost is the fact that with the xbox live service, they've realized it's far more profitable to have your OS double as a marketplace. With win 8 they attempted to get this marketplace into homes, but failed. By offering 10 for free, they are hoping they'll get the app store right on your desktop just like on the 360/Xb one for those hold-outs that refuse to upgrade from 7.

Honestly, 10 looks pretty good thus far and considering 7 is getting a bit long in the tooth, it might be a win for everyone.
January 26, 2015

techguy@ymail.com
I have been in IT since 1986
I have used Win8 and classic shell since the day it was released
I HAVE HAD NO PROBLEMS WITH WIN 8
January 23, 2015

Pilm
RR is right, seems to be a lot of misinformation by he MSFT haters! Win10 is free, free, free, but only if you install it within a year of release. If you wait... more than a year... you'll have to pay! It's so simple people!
January 23, 2015

Ricochet-Rabbit
What annual payment? Where are you people coming up with this bit of information?
"Microsoft will continue to keep it up to date for the supported lifetime of the device for no additional charge." How can this be stated anymore clearly?

You either accept it for free during the first year or purchase the OS after the first year. It's really not that difficult to understand.
January 22, 2015

Win3.1 ... well, it was a start.
Win98 was *OK*
WinME/2000 Sucked.
WinXP fixed it. - I still have one machine running it, works FINE.
WinVista - *SUCKED* - still "running" today, *barely* limping by as an occasional internet portal/TV streamer. Anybody need a boat anchor?
Win7 fixed it. - Two machines running GREAT.
Win8 *SUCKS*(for desktops) - One machine running "Shell" that mostly converts it back to Win7.
Win9 - (Oh crap! Did MS just skip step where they fix Win8?)

My opinion - Win7 is working great for desktops. And noooowww MS has discontinued support, because they want to pursue a "Multiple Platforms Strategy".

The "Multiple Platforms Strategy" forces compromises that hurt performance on all sides.
That's exactly what made Win8 Suck. I expect Win10 will have only marginal improvement over Win8.

sparky_in_the_midwest
As the article mentioned, there will be an annual cost. It should be noted that about half of every version of Windows has stunk (i.e. ME, Vista, 8). At least MS is giving the customer the chance to try before spending. But, this would be feasible ONLY IF THE CUSTOMER COULD REVERT BACK TO HIS/HER PREVIOUS OPERATING SYSTEM if they don't like it. My suspicion is that being able to revert will not be possible. Final comment regarding annual payments: isn't this similar to some drug dealers/pushers...initially give away crack to ensure future business?
January 22, 2015

algreimann
If they get rid of the metro view, I'd be willing to update. Otherwise, I'll be sticking with Windows 7 until its no longer supported.
January 22, 2015

chaoticMN
I just upgraded W7 to 8.1. Had to get a new printer driver that was a real pain to get working. I can't imagine all hardware manufacturers will have updated software to support this if we have hardware older than 2 years. I do like W 8.1 though. W8 was a disaster.
January 22, 2015

fbara
I'd be interested in upgrading but only if I don't have to pay for the use of the OS after the 1st year is up. I know MS is moving to the software-as-a-service model and I'm not interested in renting my OS, much like MS is doing with Office.
January 22, 2015

You'd expect to pay over $20 for something similar elsewhere plus the coupon below saves $9 by granting free shipping. Buy Now at Meh

Save on new and refurb items in this sale that includes brands like Samsung, Razer, Vizio, ASUS, and Western Digital. Shop Now at Woot! An Amazon Company

Save up to half off a bunch of comfy shoes including loafers, sandals, slip-ons, boots, and more. Shop Now at Nordstrom Rack

Women's T-shirts and swimwear start from $9.97, as do men's jeans and jackets, among other discounts. Also $9.97 are the pictured Ed Hardy Men's Star Print Sneakers in Blue, a $49 savings. Shop Now at Saks Off 5th