Low, Low Rider at a High Price: The Cost of Owning a Tron Legacy Light Cycle 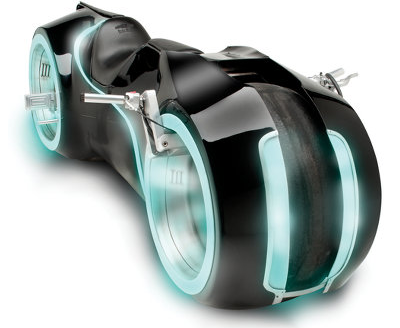 As much as dealnews remains dedicated to bargains, sometimes we fantasize about a product so unique and ridiculously deluxe, that price isn't even a real consideration. For example, there's the Italian-made Red Diamond bathtub, which, at $47,000, has dual HDTV screens (in case you don't like what your partner's watching), a champagne holder encrusted with Swarovski crystals, and a console framed in 42 grams of 18-karat gold.

Nice tub, right? But assuming your tastes run more sci-fi-meets-dirtbike (like us), we think you'd prefer Hammacher Schlemmer's full-size Tron Legacy Light Cycle (search for "11862" to find it). Inspired by the 2010 film Tron: Legacy this vehicle is made from a steel frame covered by a fiberglass cowling that mimics its computer-generated counterpart. It also features electroluminescent strips built into the tire cowlings, rims, and body, along with a fuel-injected Suzuki 996cc, 4-stroke engine.

The price: $55,000. To put that into perspective, that's enough dough to buy three brand new Harley-Davidson Dyna Switchback motorcycles, with change to treat a few friends to 2012 Vespa scooters. But hey, if you've gotta ride in interplanetary style, nothing else will come close — not even the Batman motorcycle from The Dark Knight.

When we featured the Tron cycle "deal" over the summer, we noted that it's "arguably the coolest movie vehicle since the Hoverboard from Back to the Future II." As such, it garnered a lot of avid attention from our readers (it was our eighth most popular deal of 2011), even if, we assume, very few of you took the plunge and bought one. But we bet some of you considered it, in your wildest dreams. To indulge ourselves, we also investigated (without any help from either space aliens or Hollywood stunt men) just how much it would cost to keep the Hammacher-Schlemmer Tron Legacy Light Cycle in tiptop shape, rideable, and street legal.

Engine Parts and Maintenance
The Tron Legacy motorcycle engine is akin to that of the Suzuki V-Strom 1000 (which, in case you're interested, retails for $45,000 less). To keep it running smoothly, we've compiled a list of common parts you may need throughout the year in order to keep this machine purring. We've referenced prices from the BBB-accredited Motorcycle Superstore: an oil filter ($10), a BMC air filter ($80), chain lube ($5), and WD-40 ($8). Of course, you can spend a lot more if you soup up your Tron bike if you want it to become an actual racing bike. You'll have to start by switching out the exhaust. The Akrapovic Evolution Exhaust with Hexagonal Muffler will do the trick and only set you back $1,945.99 to start.

Insurance
Sure, you want to drive your Tron 'cycle, and you're not going to let any galactic raider stand in your way. But, uh, what about a cop? He's going to want to see your insurance card, and insuring a rarity of this type is not quite the same as, say, your neighbor's motorbike. Insuring your ride might be a bit difficult because of the bike's rarity and unusual nature. Moreover, agents will be hesitant to insure your Tron because custom-made bikes are also expensive to repair.

Once you do find coverage, it pays to drive safely and not too fast. Riding the Tron Legacy Light Cycle is no exception. While the bike has a top speed of about 100mph, it becomes awkward to handle at such speeds, and is best for cruising (and thus garnering more head-turns from in-awe bystanders and other motorists.)

The Tron Legacy Light Cycle weighs 474 lbs., but getting replacement parts for its one-of-a-kind body could prove to be a 2-ton gorilla if you don't know where to look. The good folks at Hammacher-Schlemmer tell us that the manufacturer is a company called Parker Brothers Choppers, whose motto is, "If you can dream it ... we can build it." Based in Melbourne, Florida, this custom motorcycle shop also makes "The Green Machine" — a grown-up, tricked-out Big Wheel trike that Hammacher-Schlemmer also sells (search for "11894" to find it). We learned that Parker Brothers haven't seen a single request for replacement body parts on the Tron; we therefore assume Light Cycle owners are taking very, very good care of these babies. Thusly, there's no price sheet available for, say, a new fiberglass front fender, but we do know that a custom fender for a typical motorcycle runs between $300 and $700.

If you do need a repair, though (we're figuring another jealous biker did some damage), then you'd have one of two options: Order the part from Parker Brothers Choppers (which could take up to four weeks to make and ship if it's not in stock), or send the bike to Florida and have them work on it. Via FedEx 3-day freight, it would cost $1,141.09 to ship the Legacy Light Cycle from Chicago to Florida, and about triple that for overnight freight delivery. But hey, what's another $2,000 when you're talking a $55,000 set of wheels?

Gas
The internally-comparable Suzuki V-Strom 1000 motorcycle gets about 50 miles to the gallon, and assuming you only have a few movie premieres to go to, we estimate you'll be driving it about 1,000 miles each year (considerably less than the average 1,800 miles per year most motorcyclists ride.) So at $4/gallon, your fuel bill will only reach about $80. Of course, this cost goes up the more you ride, but you could even save quite a bit if you use the Light Cycle instead of a car to run routine errands.

Gear and Accessories
Whether you're headed around town or are riding on the open road, you must sport protective headgear while riding this, or any motorcycle. Your helmet and leathers should probably remain simple, however, so as to not take away from the impressiveness of the Tron. The sleek Bell Arrow Helmet in Black for $99.95 would do the trick, and you'll also want to invest in proper riding gloves and a leather jacket.

The Tron Legacy Light Cycle Lowdown
While possessing your very own Tron Legacy Light Cycle may not be entirely feasible, we think it important to always consider the sometimes-overlooked-but-inherent costs of purchases. Big ticket items, in particular, carry larger associated costs. We estimate that, in addition to your initial $55,000 investment, owning and maintaining a Tron Legacy Light Cycle will cost at least $3,670 (excluding the cost of insurance). So the price of your dreams will thus run you a cool $58,670. Good thing you save so much money by reading dealnews!

Lou Carlozo is a dealnews contributing writer. He covers personal finance for Reuters Wealth, and was most recently the managing editor of WalletPop.com, and before that a veteran columnist at the Chicago Tribune.

whetstone
Well, I suppose you could save on oil and air filters by getting their all-electric version that premiered last summer.  (Ignoring, of course, the upkeep associated with EVs, such as regular replacement of worn batteries.)  And it would sound way cooler than a gas engine.
March 2, 2012

VIEW ALL
Blog · Roundups · 5 hrs ago
The Best Smart Home Deals
Whether it's a smart assistant, a security hub, a smart lighting setup, or one of the many other home automations on offer, these are our picks for the best smart home deals available right now.
Blog · Morning Jolt · 8 hrs ago
5 Deals You Need to Know Today: Dress Shirts for $3 at Jos. A. Bank
Men's dress shirts emerge at suspiciously cheap prices at Jos. A. Bank. Check out this offer and more in our roundup of the five best deals we found over the last 24 hours.
Blog · Roundups · 2 days ago
Affordable Gaming Laptops
If you're looking for our current list of the finest gaming laptops at the finest available prices, welcome. There's deals aplenty on high end laptops and more budget conscious options as well as some associated accessories that might enhance your overall laptop gaming experience.
Blog · Roundups · 3 days ago
The Best Tool Deals
We've rounded up the best deals on tools, accessories, combo kits and more – from beginners to hobbyists to pro-am and beyond, look no further for your cheap tool needs.
Blog · Buying Guides · 3 days ago
88 Hispanic-Owned Businesses to Check Out
Hispanic Heritage Month is a time to support Latino-owned businesses, but our list is full of brands you can easily shop all year long. Check out our list of 88 Hispanic-owned businesses to patronize.

Apply coupon code "PSERIESSEPT10" to save $2,600 off the list price. Buy Now at Lenovo

That's the lowest price we could find by $6. Buy Now at Home Depot

Save on men's, women's, and kids' styles including outerwear when you apply code "FRIENDS". Shop Now at Lands' End