LCD TVs Win the Popularity Vote Against Plasma, But Which is The Better Deal?

LCD TVs have become the format of choice for flat-screen TV buyers. However, despite their market dominance, LCDs have yet to give plasma TVs their final death blow. And that's a good thing, because when it comes to pricing (specifically on 50" 1080p sets), plasma TVs trounce their LCD competitors. 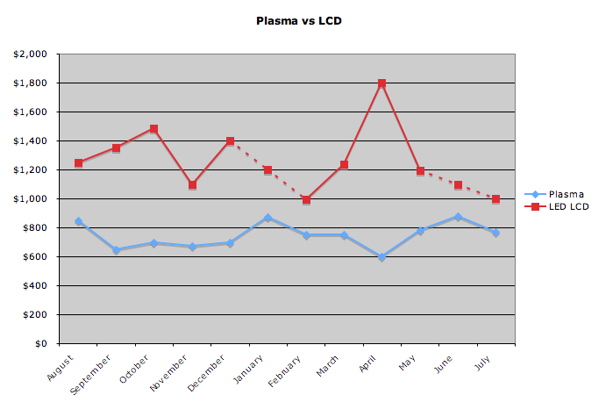 So, if you're longing to make a big-screen TV the center piece to your home theater system, consider the deal-rich plasma option.

The Pros and Cons to Plasma
Like all technologies, plasma TVs have their advantages and disadvantages. On the plus side, plasma TVs have consistently outperformed LCDs with regards to picture quality. They deliver deeper blacks and don't suffer from motion blurring. In fact, CNET's best HDTV of 2011 is a plasma TV. So as far as image quality is concerned, plasma reigns supreme.

And while it's true that some manufacturers have pulled out of the plasma market, it's also true that many companies such as Panasonic and Samsung remain big proponents of plasma TVs showcasing new models every year at the Consumer Electronics Show. So in the end, the only true con to plasma TVs is their slightly bulkier size.

What Prices and Features Can You Expect? 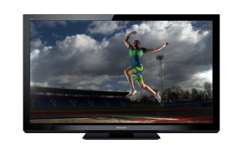 As we approach Black Friday, we expect to see TV prices plummet across the board, but 50" plasma TVs in particular will reach astonishing lows as they try to beat April's all-time low ($599 at Fry's). Compare that to the best deal we've seen on a 52" LED LCD ($979 at BeachCamera via eBay Daily Deals), and you'll see where the real savings are.

Conclusion
If you're in the market for a big-screen TV, you'll get the most bang for you buck from a 50" plasma. Sure, LED-backlit LCDs are hot right now, and they might even look sleeker from a design perspective, but on average plasma TVs still outperform LCDs. And with their much lower price, there's simply no reason not to invest in them.

Ready to put this information to use? Check out our section of daily HDTV deals, or set up an email alert to know immediately when we list the item of your choice.


*This data is based on deals listed on dealnews.com, which represent low points, not averages. Shipping prices (where applicable) were factored into the pricing in our data. Points on the graph represented by a "-" indicate there were no deals for that month.

RobS
Look, if 'dealmuse' wants to pay more for a TV and watch a crummy LCD picture, simply because he believes he's saving the planet through a little less power usage - go for it!! Just don't legislate my plasma from me through green initiatives, because the plasma picture is clearly and provably superior.
August 28, 2011

pyroskater85
Also take this into consideration. What is the price difference between the two TV's? Now what is the energy consumption for both TV's. Most likely the difference of price between the two TV's is more than enough to power the Plasma for at least 3-5 years. So you can get the plasma, use the money you saved from not buying the LED TV, pay the electric bill for that TV for at least a few years and you won't have to worry about the higher energy cost. Especially since the new plasma TV's are more energy efficient and after 3-5 years it should be about time to buy something new because technology is always changing.
August 26, 2011

demogo
OK, I checked the July's best plasma deal mentioned above and it comes in at 339 watts.  Still 3x the consumption of the LED but definitely more reasonable with the newer sets.

That's a 3 year old plasma set.  I'd be very interested in the power consumption of a 2011 50" plasma set because they are supposed to be more energy efficient.

dealmuse
"...there's simply no reason not to invest in them."

How about this for a reason:

= about $100 electricity savings per year.

And you have the audacity to use the word "INVEST".