Amazon wanted to sell all eBooks at rock bottom prices, but publishers revolted. Deals can still be had though, especially on smaller, less popular titles.
BY:
ERIN CODUTI
DealNews Contributing Writer 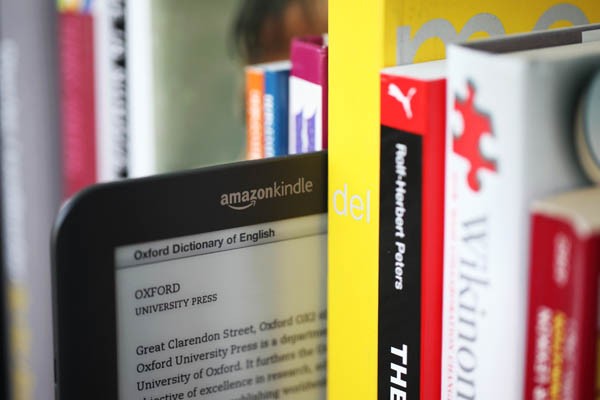 If you thought you noticed higher eBook prices recently, you're right. And you're not the only one who's noticing.

It's all thanks to Amazon, which has enormous influence in the world of books and eBooks. When the world's largest online retailer wanted the ability to sell all its eBooks at a loss, publishers revolted, and Amazon was forced to adjust. But does that mean you still can't get a good deal on digital content?

In the past year, Amazon was involved in high-profile eBook pricing disputes with several major book publishers, like Hachette Book Group, Simon & Schuster, and HarperCollins. Amazon wanted all eBooks priced at $9.99 or less and was willing to take losses to make it happen; the publishers insisted that this price wasn't reasonable for many titles, due to marketing and editing costs, and said lower prices on Amazon made it hard for them to sell their titles elsewhere.

The agreement they came to? These major publishers would get to set prices on their titles as they liked, but they'd have significant financial incentives to offer titles at lower prices.

The result has been an upward creep in the cost of digital books. Industry researcher Codex Group LLC reported that books from the five biggest publishers (the other two are Penguin Random House and Macmillian) cost an average of $10.81 each, more than double the $4.95 average cost of other eBooks released in 2015.

Exactly how much have prices increased? It's hard to make overall statements about the eBook market. For some authors and series, prices haven't changed at all. But others show an irritating trend: Many books that had cost $8 or $10 last year, later jumped in price to $13 or $14 in late 2014 and 2015. That's 30% to 60% more than they cost previously.

According to The Wall Street Journal, publishers saw a substantial drop in eBook revenue during the first five months of 2015, but a possibly-related bump in the sales of physical books. Hachette blamed the lack of hot titles for the decline, as well as "implementation" of the new Amazon deal. It's worth wondering, however, if it's simply the increased prices themselves that are to blame.

The Kindle Version is Rarely Cheaper Than Paperback

In practical terms, many titles offer limited savings, if any, when you choose a digital product over the physical copy these days.

DealNews looked at the list of Amazon's top 20 recent releases and found price differences as small as 11 cents between eBook and hardcover. For a quarter of the list, you'd save less than $1 by choosing digital, and for two titles, released in paperback, you'd even pay slightly more for the Kindle version.

The prices do seem to be affecting consumers' purchases. Amazon's list of recently-released Kindle bestsellers bears only a passing resemblance to their overall list of such bestsellers. At the time of writing, only three titles appear on both lists.

Prices on the overall list range from $8 to $21. The Kindle list sports titles costing from $1 to $15, with an average cost of $6.59 — lower than the cheapest book on the "overall" list. That definitely suggests that customers aren't completely content to pay hardcover-style prices for eBooks.

If anything, as prices for some eBooks have risen, consumers may be gravitating more toward the cheaper titles. While no one currently tracks the average price of popular eBooks, figures from Digital Book World for last summer generally show the average price for bestselling eBooks in the $7 to $8 range. Plus, according to the Wall Street Journal, Amazon claims Kindle eBook sales are up in both units and revenue. So if customers are buying fewer titles from the major publishers, they must be spending those dollars elsewhere.

Have your eBook purchasing habits changed this year? Is there a time you chose a physical book due to a lackluster price difference? How much are you willing to spend on an eBook? Let us know in the comments.

SamuelT
Publishers are happy about decisions that Amazon want but they don't offer anything other than putting prices higher.

I recently desired to buy "The power of full engagement" but the price of the paperback is 10$ and the price for the Kindle version is 14$. Add to that that I'm a Canadians and the prices for Kindle version are generally higher when you are Canadians. I just have to log out and check the price and then Log In and check the price again and the price changed. I know that publishers do not want to loose money but It's just easy to them to sell the books without using Amazon but in the vast majority of the time, they sell the ebook at a price higher than on Amazon.

In conclusion, I don't think it's the fault of Amazon; I think it's publishers that found a nice way to grab a little bit more money to the consumers like me. They don't want people to download the books on hack sites but they don't give reasonable prices.

wetpaint
So much for Kindle. I'm happy with paperbacks anyway. It's so much fun shopping for PAPER books. I hope that never goes away.
September 13, 2015

monicagurl
I enjoyed e-books for the simple idea of cost and space savings. Being a avid reader, i always had several books reading and i also consumed a lot of space for books at home and on vacation. Along came the kindle and it was love at first sight. i own 4 of them. I am decidedly unhappy with the trend that i am seeing. I do not care to pay literally the same amount for a e-version of a book as a physical copy. Why you ask. for the same reason given by
atrain224. It cost pennies for the digital vs physical copy. There is such a thing as being too greedy. i guarantee the profit for e-books vs physical is greater for the publisher yet they are going to lose these very same customer. Trust me i will find alternatives to get my read on with minimum cost. I am giving the middle finger to those soul sucking money grubbing publishers by not purchasing e books over $5. Library's still rock for bookworms like me.
September 13, 2015

but another view is welcome
September 9, 2015

atrain224
I will wait until the ebook is priced somewhere under $5. That seems to be the price point I'm comfortable with. It really bothers me that I have to pay full price for something that is not tangible. A real book you can lend to others, sell to buyers, etc. An electronic book does not work that way, so it's hard for me to pay full cost for something that was manufactured digitally for pennies vs. the full on production for paperbacks.
September 8, 2015

sc122002
Agreed, Goodwill is a great place to check out books- either their regular retail or their bookstores (as well as online). I've found many student textbooks there (though some are probably older editions but still usable depending on the professor), as well as a mix of a little of everything. I just got a "What to Expect the First Year" book for mom to be for her baby shower, in totally mint condition (looked brand new) for 99 cents. It retails for like 20.
September 8, 2015

Wd1966
I read books including new releases free through my local librAry with the overdrive app on my kindle. I choose ebook format so I don't have the hassle of having to sign into Amazon to get them and just read them on the app on my kindle. You can also buy paper books at goodwillbooks.com
September 8, 2015