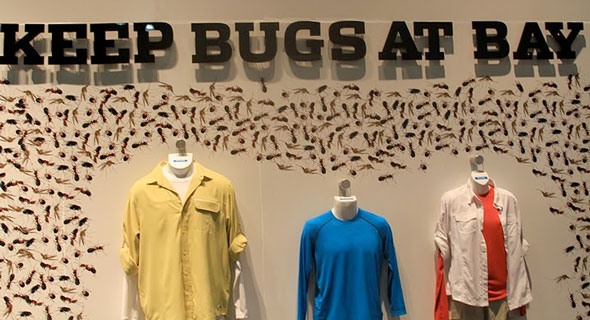 Have you ever come across seemingly space age-sounding bug repellent clothing? It sounds ideal; who wouldn't want to avoid dousing their entire body with harsh bug spray? But, does treated apparel actually keep the bugs away? With summer coming to a close, now may be the best time to test out bug-repellent clothing.

Today's bug-proof clothing is treated with a synthetic form of pyrethrum, an extract from the flower head of a type of chrysanthemum. This insecticide was once traded along the Silk Road, and was even used by Napoleon's army to combat fleas and body lice. It grew in popularity in the 1900s as it became the main ingredient in household bug spray.

The modern form of this compound (synthesized permethrin) is widely used in pet flea collars, timber treatments, and as an insecticide in agriculture. It is also used in higher concentrations as a cream to treat scabies. However, its human use is restricted to clothing treatment, as it's not meant to be applied to skin because it's an irritant and is quickly dissipated by sweat.

Does Synthetic Permethrin in Clothing Work?

Check out the video from The University of Rhode Island's TickEncounter Resource Center, which put deer ticks on treated and untreated fabrics. Notice how the ticks fall off the treated fabric within 60 seconds? Nice, right? This is evidence enough to suggest that treated clothing can repel mosquitoes, fleas, bedbugs, chiggers, and flies. What's more, permethrin remains in treated fabric even through 70 trips through the laundry!

The U.S. Army is sold on permethrin, as well. The organization has been treating select combat uniforms with the repellant for over 20 years. Recently, malaria has become a concern in Afghanistan, causing 91 soldiers to contract the disease in 2011. To protect the troops, permethrin has become an important tool repelling mosquitos. The Bill & Melinda Gates Grand Challenges Explorations program is sold on the compound, too; it's funding a Malaria Consortium research project on the potential for insecticide-treated clothing to fight the scourge of malaria. The consortium is also promoting the production of insect netting treated with the repellant.

As an agricultural agent, permethrin does have its risks. It can be toxic to aquatic life, bees, and even cats. However, as a treatment for clothing, the chemical has been approved by the EPA and numerous studies have found it presents minimal hazard to humans.

Where Can I Buy Bug-Repellant Clothing?

Permethrin-treated apparel is commonly available for babies, children, and adults. For the little ones, Baby No Bugs BabyLegs ($15 with $1.65 s&h, a low by $6) are leggings specially made for infants that are treated to safeguard them from bug attacks. Adults can sport the anti-insect apparel as well: the pictured ExOfficio Women's BugsAway Chas'R Crew Long-Sleeve Shirt ($18 with $5.95 shipping, a low by $6) is made from a quick-dry fabric, and fits seamlessly into most wardrobes.

Many woodsmen and hunters will benefit greatly from permethrin-treated apparel as they're most often exposed to mosquitoes and ticks. The Orvis Bugsaway Warm-Weather Waterfowl Pants ($59 with $9.95 s&h) will certainly come in handy adjacent to mosquito breeding pond. Other outdoor enthusiasts may find this Outdoor Research Bugaway Bucket Hat ($9.95 with $5.95 s&h, a low by $7) useful.

If you've ever gone camping and woken up to itchy and painful bug bites, you may want to consider a bug-repellent sleeping bag liner. The Sea to Summit Insect Shield CoolMax Adaptor Liner ($43.95 with $5 s&h, a low by $6) will help you sleep easier, as it repels mosquitoes, ticks, flies, and fleas. It's effective through six months of exposure to weather or through 25 launderings.

Instead of buying new gear and clothing, it's possible to treat existing clothing with bug repellant. The Rothco Sawyer Permethrin 24-oz. Insect Clothing Spray ($14.57 with free shipping, a low by $) effectively deters mosquitoes, ticks, flies, fleas, and other annoying and dangerous insects for six weeks or through six washings.

Remember, if you plan to spend time outdoors at dusk and dawn this summer and fall, be aware of the potential hazards of those insect bites and the diseases they may carry. Trusty bug spray can help protect your skin from bites; or consider keeping bugs at bay by donning permethrin-treated clothing. The technology is proven, the clothing selection wide, and the reward can be a peaceful trip through the woods or around a bonfire.

dealover
I actually buy mine at Dick's sporting goods for about the same, but no shipping cost. ...[ I do believe I've gotten it for less there but according to the site it says $14.  They also carry cans of permethrin, but they hurt the fingers after about one side of the outfit & aren't good for the environment.   I've been a permethrin supporter/user for about 8 years now.  The stuff works for hours in the woods and outdoor activities.
August 28, 2012

New
Crutchfield · 1 hr ago
Outlet TV Deals at Crutchfield
up to $2,780 off
free shipping