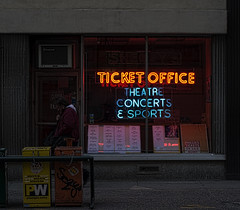 With Groupon partnering with LiveNation (owner of Ticketmaster) for a new ticketing promotion deal, consumers should be on their toes and read the fine print when they seek out online ticket deals.

This is because the world of concert and sports ticketing is in flux. The companies that control the tickets have lately been trying out a new idea: restrictive paperless tickets that consumers wouldn't actually own.

It's an idea that sounds great - if you're a giant ticket company.

LiveNation calls the practice "Fan Protected Paperless Ticketing" and says it prevents scalping and is more convenient for consumers.

But numerous groups, including the National Consumers League and secondary ticket seller StubHub.com oppose the idea.

The Fan Freedom Project, a group that has been opposing this idea, says it's an attempt by companies like Ticketmaster (as well as artists and venues it works with) to control the secondary market. If the tickets exist only in a virtual state, then the purchaser is forced to go through the original seller to pass the ticket to someone else.

Reselling tickets can be an incredibly lucrative business. Little wonder it's drawn the attention of industry giants like Ticketmaster (which already controls a big part of this market).

Performers themselves are even shuffling for their piece of the action. Recently, singer Katy Perry included a provision in her concert contract that allowed her to scalp her own tickets, which shows how tempting forcing fans into the secondary market can be.

Tickets for popular events are always going to be limited and will always create a secondary market. That's capitalism. But what's at stake is the freedom to do with those tickets as you please.

For most people, that means buying a ticket and attending the event. When that's the case, the biggest burden of the paperless ticket is having to bring the credit card used to purchase them to validate that they're yours.

But what if you're a parent buying for a teenager? Or buying tickets for a cousin on the other coast as a birthday gift? What if you can't make the event or just don't want to go that night?

Giving away the tickets to a coworker or friend, even somebody in your own family, could become an ordeal. In fact, if you purchased a ticket for a group, it has the potential to get even messier: The whole group has to be assembled before entry, since only the purchaser can activate the paperless tickets.

Given the ever-increasing cost of attending a sporting event, music concert or theatrical play, these kinds of added restrictions don't sound too appealing, at least from a consumer's point of view.

The one plus? You can't really lose a ticket you don't actually possess.

Some states have started the ball rolling to ban the practice of virtual paperless ticketing because of the limits it places on consumer choice. But until there are protections in place, be sure to check what kind of ticket you're getting when you buy online.

And, remember, if you want to buy tickets for a friend halfway across the country consider that someday soon, they might not be able to use them without you being there.

Mitch Lipka is an investigative journalist for consumer issues who formerly wrote for WalletPop.com, Consumer Reports, thePhiladelphia Inquirer and the Fort Lauderdale Sun-Sentinel,among other places. Follow him on Twitter — @mitchlipka or on Facebook. You can also sign up for an e-mail alert for all dealnews features.
DealNews may be compensated by companies mentioned in this article. Please note that, although prices sometimes fluctuate or expire unexpectedly, all products and deals mentioned in this feature were available at the lowest total price we could find at the time of publication (unless otherwise specified).

riggarob
I only have so many orrafices these "corporations" can fill. Right now, I'm full up w/ others looking out for my welfare !!! I REALLY HATE Govm't intervention, but sometimes, "there otta be a law"!
May 26, 2011

bikeral
I'm sure ticketmaster, and other scalpers, will think we are all stupid and try to sell it to us as a benefit to the consumer.   They already rape us with their ridiculous fees, now they want to do it all over again.
May 26, 2011

VIEW ALL
Blog · Morning Jolt · 26 mins ago
5 Deals You Need to Know Today: Save an Extra 50% off in Levi's Memorial Day Sale
It's an extra 50% off sale styles and 30% off everything else in Levi's Memorial Day hijinks. Check out this offer and more in our roundup of the five best deals we found over the last 24 hours.
Blog · Marketplace · 14 hrs ago
How to Create Coupons on Amazon
Amazon brought coupons to Seller Central in 2017, but these aren't your grandmother's coupons. Learn how to create coupons on Amazon, and what to know before you do.
Blog · Buying Guides · 1 day ago
6 Simple Ways to Renovate Your Kitchen Through Home Depot
If you're feeling like your house needs a refresh, consider these simple ways to do a Home Depot kitchen renovation. You can update your look and potentially increase your home's value!
Blog · Buying Guides · 5 days ago
What's the Best Time to Buy Big-Ticket Items?
Savvy shoppers are always on the lookout for a great deal, and to help you out, we've put together guides on the best times to buy big-ticket items.
Blog · Buying Guides · 6 days ago
Ask an Expert: When Can I Expect a Price Drop on the TV I Want?
Do you have a question for us experts here at DealNews? If so, submit it and we might just answer it in a future column! Until then, check out our first column, which offers advice to a cost-conscious TV shopper.

That beats eBay's price by $5. Buy Now at Amazon

It's down to its best ever price. Buy Now at Amazon

That's $130 less than what Best Buy charges for a new one. Buy Now at eBay