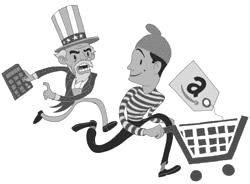 The Senate approved the hotly-debated Internet sales tax proposal on Monday, which means the landmark legislation is on its way to the House. And if the House gives it the go-ahead, the landscape of online shopping may be forever changed.

The passage of the Marketplace Fairness Act will authorize 45 states (and the District of Columbia) to require large online retailers to collect state sales tax on purchases made by residents. (Some retailers, like Amazon, already charge sales tax on orders in which it has a warehouse or physical presence.) Once in place, the Marketplace Fairness Act would therefore mean most online consumers would have to pay sales tax on their online goods — a cost many have managed to avoid through e-commerce.

The Effect of Marketplace Fairness on Online Sales

Thanks to a 1992 Supreme Court ruling, not all online shoppers are charged local sales taxes by Internet and catalog retailers as long as said companies don't have a physical presence in a customer's state of residence. While this means plenty of shoppers have been dodging anywhere between 4% to 9% sales tax at point-of-purchase, 22 states already require residents to pay a "use tax" when filing their state taxes. So while this tariff tax isn't collected at checkout, many Americans are already supposed to pay a set rate for their out-of-state purchases; upon its implementation, the Marketplace Fairness Act will ensure that consumers pay the proper amount of tax owed to their respective states — to the tune of an estimated $12 billion per state.

But, more importantly, supporters of the Marketplace Fairness Act say that it will level the playing field of small brick-and-mortar stores and small online retailers (with sales under $1 million) with larger, online competitors. For retailers that do bring in more than $1 million each year, complicated tax collections from 9,600 tax jurisdictions across the U.S. will likely impact owners and may leave consumers debating whether to shop online altogether. Not surprisingly, in a letter to customers, eBay CEO and bill opponent John Donahue advocated to expand the sales tax exemption to include businesses with fewer than 50 employees and that make up to $10 million annually in out-of-state sales; these such measures, Donahue says, will help to avoid an unfair burden on smaller business owners.

There are even more exemptions to the Act. If you live a state where Amazon has a warehouse — like Arizona, California, Kansas, Kentucky, New York, North Dakota, Pennsylvania, Texas, or Washington — you are already paying taxes on purchases from the online giant and your at-checkout costs will remain the same. For residents of Montana or New Hampshire (and other states that don't charge any sales tax at all), online shopping bills will also not increase. But for a majority of the nation, a uniform online sales tax will undoubtedly increase the cost of your online shopping endeavors. To find out exactly how much more you will be paying for online purchases, use Tax Cloud's interactive map.

Don't panic-shop just yet. States presently not collecting sales tax for online purchases must provide residing companies with free software for calculating taxes. State governments must also set up a singular entity to collect payment, which itself requires that most states first simplify their tax policies. When all is said and done, the earliest this bill can go in to effect is October 1. What's more, keeping in mind that the House is more resistant to the bill, there's a possibility that Americans' online shopping won't be affected until 2014.

The Marketplace Fairness Act has been the subject of much debate for years. But now that it's in the spotlight, we want to know what you, dealnews reader, think of it. If the bill is approved, will the new online sales tax affect your online shopping habits? And remember, you can always avoid sales tax during your state's tax free weekends over the summer.

Related dealnews Features:
Summar Ghias is a freelance writer who attributes her love for big cities to the diverse cultural, artistic, and food-centric experiences that can be had in them. A former assistant editor at Budget Travel, Ghias has freelanced at several other titles including Girlfriend Getaways, Discover, People, In New York, Spinner.com, and AOL Travel, among others.

rockelscorcho
if this passes, I will still shop online. I don't like going to big box stores unless they offer one hell of a deal. However, I'll likely see if I can purchase the items I want from venders that are not actually afflicated with the actual store. For example, I'll visit Amazon, but try not to buy items which would be taxed and sold via Amazon, but rather, a third party vendor who hopefully ships via prime as well.
This in turn means that I won't be buying items immediately when they are first for sale. It might be a while. Videogames are an example. I might just wait until the cost of the game is below 25 bucks and hope it is sold by a seperate vendor and it will be cheaper. Even if I did purchase it and it was taxed, the lower cost would include a lower tax bill.
May 13, 2013

vwoom
If this sales tax across the board thing comes into total fruition, it will just boil down to which offers the best price on an exact item you are looking for offered for sale either from an online merchant...or from retail, in store. More comparative shopping "home work" for me then...though the retail store, if said item is in stock, gets the leg up in this case.

Instant (gratification)..Boom! Pay up-front...item up-front! Turn around in a snap...no shipping/in transit issues...a day or (in worse cases) a week's worth of wait for the item to arrive.
May 12, 2013

ddgiant
@ RIGGAROB. I am taking you are talking about New Hampshire. Lets see no sales tax, yes. 3 highest property tax yes, the worse tax on the pore there is gambling yes.
Just because they are not collecting direct sales tax does not mean they are not getting the money from some where else.
May 10, 2013

jeffosoft
They do its called a Tariff...

"LonnieMcClure
The next step: Requiring the USPS to collect sales tax on all incoming orders from outside the United States."
May 10, 2013

vanChippee
This tax sounds altruistic but government has earned a cynical view. Unfortunately, we've been talked down to" so many times by officials casting the most transparent of spins on their power trips and greed, looking us right in the eye as they obfuscated, that I, at least, doubt everything that might be construed by anyone as a prurient design masked by a high ideal. The purpose of this tax, as stated, sounds altruistic. Look out! It's way too big and singular a flower growing in the desert of our current Federal government's record to be true. It's probably a "foot in the door" tax. Can't you almost hear faint gnashing of teeth at the coming feeding frenzy? Say goodbye to the internet you knew, and loved with all its flaws, because at least it was free, and it was yours.
May 9, 2013

moremiles
If my local BestBuy and Walmart can match Amazon's prices I'll buy from them. They don't take 7 to 10 days to ship even though it only takes 1 to 2 days shipping from their west coast warehouses. Plus, returns are much easier to do locally. However, BestBuy and Walmart needs to make price comparison easier when searching online or on price comparison apps like RedLaser and Pricegrabber.
May 9, 2013

ski522
Man the libs just need to get their greedy hands on money anyway they can so that they can fund entitlement programs!!!
May 9, 2013

efithian
Nothing gets through the House.
May 9, 2013

mixter1245
If this passes and comes to past, all effected company's will have to collect and pay said taxes thereby raising their (product) prices to generate additional revenue to comply. i.e. very few if any "deals"
May 9, 2013

MWFplus3
Another good reason to vote any incumbent congress member out of office the next election.
May 9, 2013

LonnieMcClure
The next step: Requiring the USPS to collect sales tax on all incoming orders from outside the United States.
May 9, 2013