How to Survive the aPORKalypse of 2011

Bacon lovers, sit down. I have some terrible news for you. Due to market forces beyond the control of mortal men, bacon prices have been steadily increasing over the past few weeks. And that's not the worst of it! August is when the crisis hits critical, with prices skyrocketing to 25% more than they were last year — up to $6 a pound! You need to be prepared for this aPORKalypse now, lest you face meat-sweaty withdrawals later.

So, for your bacon-scented sanity, here's a list of some bacon-y items that you can still buy, as they should all be price-hike immune: 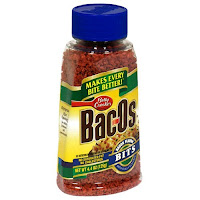 The ersatz can never replace the real thing. Chicory just isn't as good as coffee, and carob is no replacement for chocolate. But when your back is to the wall, maybe second best is better than nothing at all. With that in mind, why not stock up with this Baco's Bacon Flavor Bits 12-Pack ($18.84 with free shipping via Subscribe & Save)? Made from 100% not-at-all-real bacon (Baco's are even kosher), how could they possibly be affected by the pork-tactular price-hikes?

But maybe instead of crunchy, you prefer your bacon creamy smooth? Well, then Baconnaise ($5.99 with about $6 s&h) is the solution for you. Simply pop a straw into the tub and, with enough suction, you'll be good all day. Added bonus: Since mayonnaise is made of eggs, this is like breakfast in a jar.

What about, instead of eating bacon, you just make other things taste slightly of bacon? With this J&D's Bacon Salt Sampler 4-Pack ($12.82 with free shipping via Subscribe & Save), even foods that are the complete opposite of bacon (broccoli, yogurt, water) can sport the essence of the meat-above-all-other-meats. Even better, some of these salt flavors are vegan and all are zero-calorie and zero-fat. You could argue that makes them better than bacon, but words like that could get you a slap in the mouth 'round these parts!

Even when bacon is available at a reasonable price, there are moments in our lives where we can't eat it. For instance: while driving. Sure, it's possible, but you'd get bacon grease everywhere, causing your hands to slip off the wheel. Plus, taking your eyes off the road to flip the pan is a real hazard.

Enter the Bacon Scented Car Air Freshener ($3.54 with free shipping via Prime). Hang this beauty in your car, and you'll be safely surrounded by bacon smells as you drool your way to the office. Your car can also serve as a bacon-box that you can run to when your cravings become unreasonably intense. "Where are you going honey?" "Just outside for a couple puffs..." "Are you smoking again?!" "Nah, just gonna inhale my car a bit." "Fwew!" Happy marriages, all around.

You know when else it's inconvenient to eat bacon? While washing your hands. Tide yourself over by using Bacon Soap ($5.95 with free shipping via Prime). But buyer beware: The smell of your own bacony hands might drive you to self-cannibalism when you inevitably snap.

Maybe you can get away without the taste and/or smell of the porkly goodness that is bacon. (You, sir or madam, are stronger than most; kudos!) But perhaps you still crave the soothing appearance of bacon. (Yeah, we're stretching here ... but go with it, this is fun!)

You won't be pulling out your wallet to pay the exhorbitant prices that bacon will be asking of you, but you're still a fervent shopper. Why not give yourself something wonderful to gaze upon then, like the majesty that is the Bacon Wallet ($5.86 with $3.45 s&h)? Even though it looks like bacon, it won't stain your pants like a pocketful of bacon usually does. (What? You don't carry pocket bacon? I thought you said you loved bacon. Huh.)

Do you feel like you've been abandoned by bacon? Well, you have been. And, like the spurned lover that you are, you should immediately rebound with something that looks a lot like what you had, but will never possibly leave you. That's why we recommend this Talking Bacon Plush ($25 with free shipping). You can't eat it, and it doesn't even smell like food, but it'll never rot or price itself out of your range. Plus, it's huggably soft.

Why not take your mind off of eating bacon by reading Bacon — Sir Francis Bacon, that is! His essay, Novum Organum (The New Organon) introduced the scientific method and revolutionized how we perceive the world around us. That's, like, totally how bacon would be ... if bacon were a book.


All items mentioned are available at the lowest total price we could find from a reputable seller at the time the story was published. Amazon items may require Subscribe & Save to receive the best price.

Jeff Somogyi is the dealnews Media Editor. He salivated his entire way through this article, though he'll have you know he never licked the screen (more than once). For more of his non-bacon humor, follow him on Twitter or read his blog.
DealNews may be compensated by companies mentioned in this article. Please note that, although prices sometimes fluctuate or expire unexpectedly, all products and deals mentioned in this feature were available at the lowest total price we could find at the time of publication (unless otherwise specified).

fatmanosu
What about Kevin Bacon? Would help to watch some of his movies?
August 3, 2011