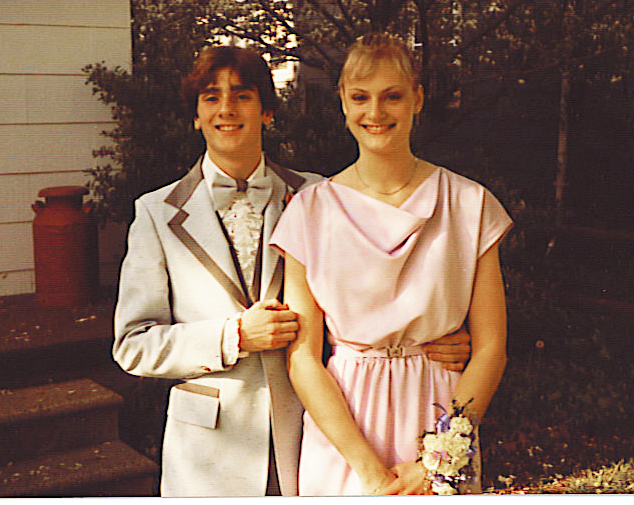 See that goofy guy on the left, trying (and failing) to look dignified alongside the pretty girl on the right? That's yours truly, circa 1981, all decked out for the senior prom complete with ruffles and shiny new shoes. Man, those were the days, but if you're anything like me, you have to wonder what sort of Prom Succubus possessed our souls to spend on that party the way we did.

I forked over $200 in 1981 cash for prom tickets, dinner, and that suave tuxedo. (Note the groovy, DeLorean-gull-wing, ultra-wide lapel flaps!) The next day, I drove to Atlantic City with my prom pals. Me and the guys blew untold quarters playing Pac-Man, while the ladies hit the beach and dished the dirt. Now, fast forward to 2013, where that money might not even cover the cost of a prom ticket for just myself. All that lucre, and for what? To hear Paul Anka croon "The Times of Your Life"? Ugh. If only I'd put more effort into making "Kung Fu Fighting" the senior prom theme.

Prom: Never have so many spent so much on an event so crucial at the time only to have it haunt us decades later with cringe-inducing vengeance. But tell that to today's teens who have even more inventive, creative ways to blow the dough. With prom season upon us, we looked up the stats and spending behind it all. So go ahead; cue up a sappy ballad, turn on the mirrored disco ball, and waltz across your living room with two left feet.

Parents, think of this shockingly huge number as prep for college tuition and wedding expenses. While you might give anything to go back in a time machine to pay $200 for all the frills, prom spending is headed in the opposite direction, rising 5% on average, from the $1,078 in 2012. Yet there's some geographical disparity: Northeastern families spend about $1,528, compared to Midwestern families spending only $722. You could say Midwestern families are more sensible, but perhaps Northeastern families know the value of having ammunition to embarrass their teens once they hit adulthood, and no price is too high to pay for it.

You couldn't pay me to go back to my senior prom, but lots of teens today will spend more to go to the prom than a Cubs fan will plunk down for a pair of primo, field-level seats. In 2011, San Marcos High School in San Marcos, CA turned the Broadway Pier in San Diego into Pandora, the planet depicted in the film Avatar. And while that planet is inhabited by DayGlo-blue humanoids, we have no idea how many students took the plunge on all-over body paint.

The average young lady will spend between $100 to $400 on a prom dress, but what if you're not average? What if you can bat your eyes at your parents and get anything you want? In that case, this Dress Goddess Tony Bowls Collection Dress for $3,190 is your priciest option. It comes in Silver or White and has a high slit running up the right leg that's guaranteed to give the school principal a heart seizure. And guess what? That dress is thrift-shop material compared to the store's 2011 dress, loaded with diamonds and priced at about $14,000 (with free shipping, we hope!). That article of clothing, it is said, set a record for the most expensive prom dress ever.

To be sure, guys are probably looking for something different in a tux than girls are in a dress. Such as: If I wipe my mouth on the sleeve, will anyone notice? Or: Will this thing make me look like a dork or a penguin? On the one hand, the average cost of a tux for prom night runs about the same as for a groom's wedding tux, about $150 to $215 according to WeddingStats. But let's say you want to go all out. A Brioni tux — the same kind worn by James Bond — could run you $10,000 or more, says The Most Expensive Journal. Then again, the lighting in most prom settings is low, and dark colors don't show up well anyway so you could sport this fake tuxedo shirt ($9.85 with $3.99 s&h, a low by $2). Trust us: Once prom night is over, you'll wear it a lot more often than a real tux.

All Things Limousine tells us that the base rate for a prom limo will always stay the same, no matter how many occupants it carries. Limos for prom night will go out with a 6-hour minimum plus travel time, and while the typical teen might skip the tip at the local diner, don't think of trying it with the limo driver. They're expecting 15% to 20% on the rental fee, which means another $180 for that $1,200 rental if you're tipping just 15%.

Many prom committees arrange for an on-site photographer to take formal prom portraits, but few are free. That said, assuming you don't someday marry your prom date, you can likely get away with a candid shot or a pre-prom photo. Whatever you do, we hope your prom photos don't look like these epically bad prom pictures.

Depending upon your philosophy, you either pull out all the stops for prom, or ask yourself whether its necessary to spend your way to a good time. Looking back, I'd rather forget my dopey tux (the inseam was two inches too long) or all the frills I blew my money on, including the 200-game Pac-Man marathon. By contrast, hanging out with dear friends like Beth didn't cost a thing, and neither did the memories themselves — though now, as a guy in my 40s, they rank as keepsakes of immeasurable worth.

seity
Skip prom. Waste of money. I never felt the desire to go and am so glad I didn't bother with that nonsense.
May 31, 2013

techiegirlm
I bought my son 100% worsted wool tux at jcpenny. It was very affordable and very good quality. He has worn it three times so far. He changed up the shirt and tie. His friend has borrowed it and it still looks as good as new. One of the best purchases I have ever made.
May 29, 2013

bilboBagit
Love the picture! :)
Prom is a once in a lifetime experience. Spend a little, don't go too crazy though. Enjoy life
May 28, 2013

Blog · Buying Guides · 2 days ago
Should You Book a Summer Vacation in 2021?
Last year, travel shut down all over due to the COVID-19 pandemic. Now, some consumers are starting to wonder: should you book a vacation for summer 2021? Check out our guide for the factors to consider before you travel.

Blog · Morning Jolt · 2 days ago
5 Deals You Need to Know Today: Enjoy Supple Skin with this Free Sample
Everybody's working for the weekend, and now? Now it is the weekend: the perfect time to enjoy a free moisturizer sample or browse a clearance sale at Nordstrom Rack. Check out these offers and more in our roundup of the five best deals we found over the last 24 hours.

Use coupon code "BISTRO20" to bag the best price we could find by $20. Buy Now at Best Choice Products

Get deals on the gifts the dads and grads in your life will love - with discounts on computers, cameras and camera bundles, smart home gadgets, music instruments, and more. Shop Now at Adorama

Stack an extra 20% off via coupon code "EXTRA20" on top of nearly everything sitewide dropping up to 50% in cart. Plus, take advantage of a few more discounts, as listed below. Shop Now at Samsonite

Save on laptops, monitors, desktop PCs, accessories, and more. Shop Now at HP

Almost everything store wide is half off. Plus, bag free shipping with coupon code "GFSHIP". Shop Now at Gap Factory