How Much of a Power Hog is Your Flat Screen TV? 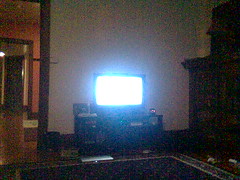 Ten years ago, the average television Americans bought was a 30" CRT (picture tube). One of these sets drew about 115 watts when on, which is nearly as much power as a pair of standard 60 watt incandescent household light bulbs.

These days, we're buying flat-panel LCD and plasma televisions, some of which are many times larger than that 30" CRT set. Are these power-hungry monsters the reason our electricity bills are going through the roof?

Let There Be Light

Plasma uses electricity to excite a gas so that it emits invisible ultraviolet light. This then strikes chemical phosphors that emit light. The light is red, green or blue, depending on the chemical composition of the phosphors. (This is essentially the same process that goes on inside fluorescent lamps, except that their phosphors emit white light.) If you're showing a bright image on a plasma screen, it is using close to its maximum energy consumption. If the image is dark with lots of shadows — think Marlon Brando's scenes in "Apocalypse Now" — then it does not need to create as much light, and it uses less power.

On the other hand, LCD panels don't make any light. They need a bright light shining from behind so that you can see the image. In general, the power consumption is the same no matter what the image is. (Some sets use "local dimming" to save energy, which we'll get to in a minute.) So unlike plasma, LCDs consume a constant amount of power while they are on.

Both plasma and LCD panel technology has been improving in recent years, and one area of improvement has been energy efficiency. For example, plasma panels have been engineered to contain more phosphors, which means more light can be emitted from a plasma discharge.

LCDs have made improvements in efficiency through the use of better light management layers. One of the biggest changes, however, has been to change from a cold-cathode fluorescent lamp (CCFL) to light emitting diodes (LED) for their backlights.

In addition to eliminating the mercury used in CCFLs (which is toxic and a hazardous waste), LED backlights also use less power making them the most energy-efficient TVs. For example, here is a comparison of the power consumption ratings for some different LCD HDTV models:

Look for the Energy Star

In September of this year, however, version 5.3 ratings go into effect. These cut consumption limits by about 30% more than the current ratings, and no longer prorate the requirements for screens larger than 50".

These new requirements are going to be very difficult to meet for plasma and CCFL LCD displays. As a result, you will likely see even more LED backlight LCD HDTVs on the market.

LEDs can meet these more stringent requirements for a number of reasons. One is that they are a more efficient light source than fluorescent. In addition, it is easier to dim the backlight in response to the image content. Some sets can only dim the entire backlight, which others can selectively dim horizontal or vertical stripes, or even smaller regions in some cases. This helps reduce power consumption, as well as increase the apparent contrast of the display.

Choosing an energy efficient set will soon be easier, as the Federal Trade Commission now requires a new Energy Guide label for all televisions manufactured after May 10, 2011. This new sign shows the average cost to run the set for a year. For instance, the cost to run the new Vizio 32" E320VP is rated at just $8 a year. It consumes only 37 watts on average, which is a 68% reduction from that average 30" CRT model.

With that kind of news, you will be able to sit back and enjoy your new HDTV without worrying it will run up your electric bill.

alanpowers
Why is it that some people who get good information for free never think that they're getting their money's worth?
June 7, 2011

DPatriot
That kind of detail should be listed in TVs' specs. I don't think Dealnews has to list that information when they post the best deals though I would love to see that info here.
June 6, 2011

mikeami
If this is relevant information, why doesn't dealnews list a TV's wattage or yearly cost in it's TV listings?
June 6, 2011